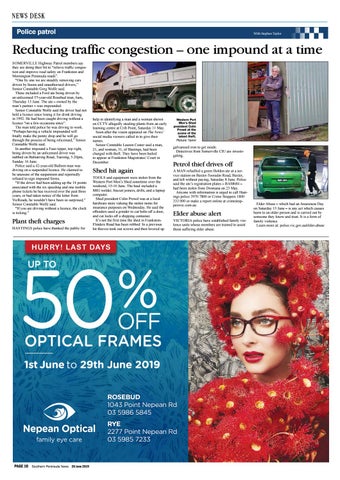 Reducing traffic congestion – one impound at a time SOMERVILLE Highway Patrol members say they are doing their bit to “relieve traffic congestion and improve road safety on Frankston and Mornington Peninsula roads”. “One by one we are steadily removing cars driven by hoons and unauthorised drivers,” Senior Constable Greg Wolfe said. These included a Ford ute being driven by an unlicensed 57-year-old Rosebud man, 6am, Thursday 13 June. The ute – owned by the man’s partner – was impounded. Senior Constable Wolfe said the driver had not held a licence since losing it for drink driving in 1992. He had been caught driving without a licence “on a few occasions since”. The man told police he was driving to work. “Perhaps having a vehicle impounded will finally make the penny drop and he will go through the process of being relicensed,” Senior Constable Wolfe said. In another impound a Fuso tipper, top right, being driven by an unlicensed driver was nabbed on Balnarring Road, Tuerong, 5.20pm, Sunday 16 June. Police said a 42-year-old Bulleen man was driving on a suspended licence. He claimed to be unaware of the suspension and reportedly refused to sign impound forms. “If the driver had been adding up the 14 points associated with the six speeding and one mobile phone tickets he has received over the past three years, or had taken notice of the letter from VicRoads, he wouldn’t have been so surprised,” Senior Constable Wolfe said. “If you are driving without a licence, the clock is ticking.”

Plant theft charges HASTINGS police have thanked the public for

help in identifying a man and a woman shown on CCTV allegedly stealing plants from an early learning centre at Crib Point, Saturday 11 May. Soon after the vision appeared on The News’ social media viewers called in to give their names. Senior Constable Lauren Coster said a man, 21, and woman, 31, of Hastings, had been charged with theft. They have been bailed to appear at Frankston Magistrates’ Court in December.

Shed hit again TOOLS and equipment were stolen from the Western Port Men’s Shed sometime over the weekend, 15-16 June. The haul included a MIG welder, biscuit joiners, drills, and a laptop computer. Shed president Colin Prowd was at a local hardware store valuing the stolen items for insurance purposes on Wednesday. He said the offenders used a grinder to cut bolts off a door, and cut locks off a shipping container. It’s not the first time the shed in FrankstonFlinders Road has been robbed: In a previous hit thieves took out screws and then levered up

galvanised iron to get inside. Detectives from Somerville CIU are investigating.

Petrol thief drives off A MAN refuelled a green Holden ute at a service station on Baxter-Tooradin Road, Baxter, and left without paying, Saturday 8 June. Police said the ute’s registration plates – BAM684 – had been stolen from Dromana on 25 May. Anyone with information is urged to call Hastings police 5970 7800 or Crime Stoppers 1800 333 000 or make a report online at crimestoppersvic.com.au

Elder Abuse – which had an Awareness Day on Saturday 15 June – is any act which causes harm to an older person and is carried out by someone they know and trust. It is a form of family violence. Learn more at: police.vic.gov.au/elder-abuse