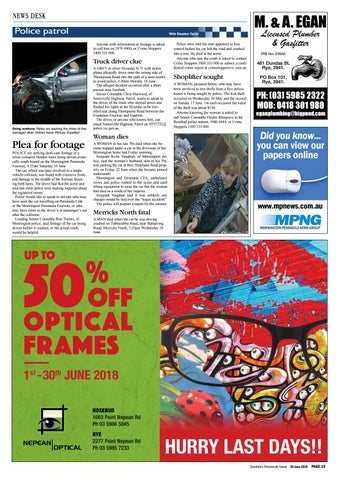 POLICE are seeking dash-cam footage of a silver coloured Holden Astra being driven erratically south bound on the Mornington Peninsula Freeway, 4.25am Saturday 16 June. The car, which was later involved in a single vehicle collision, was found with extensive frontend damage in the middle of the freeway blocking both lanes. The driver had fled the scene and mid-last week police were making inquiries about the registered owner. Police would like to speak to anyone who may have seen the car travelling on Peninsula Link or the Mornington Peninsula Freeway, or who may have come to the driver’s or passenger’s aid after the collision. Leading Senior Constable Ron Trainer, of Mornington police, said footage of the car being driven before it crashed, or the actual crash, would be helpful.

A GREY or silver Hyundai SUV with stolen plates allegedly drove onto the wrong side of Thompsons Road into the path of a semi-trailer to avoid police, 4.40am Monday 18 June. The alleged incident occurred after a short pursuit near Eastlink. Senior Constable Chris Hurwood, of Somerville Highway Patrol, wants to speak to the driver of the truck who slowed down and flashed his lights at the Hyundai as he travelled east along Thompsons Road between the Frankston Freeway and Eastlink. The driver, or anyone who knows him, can email Somerville Highway Patrol on VP37732@ police.vic.gov.au

Woman dies A WOMAN in her late 70s died when she became trapped under a car in the driveway of her Mornington home last Friday morning. Sergeant Kylie Vaughan, of Mornington police, said the woman’s husband, also in his 70s, was parking the car at their Strachans Road property on Friday 22 June when she became pinned underneath. Mornington and Dromana CFA, ambulance crews and police rushed to the scene and used lifting equipment to raise the car but the woman had died as a result of her injuries. Sergeant Vaughan said it was unlikely any charges would be laid over the “tragic accident”. The police will prepare a report for the coroner.

Police were told the man appeared to lose control before his car left the road and crashed into a tree. He died at the scene. Anyone who saw the crash is asked to contact Crime Stoppers 1800 333 000 or submit a confidential crime report at crimestoppersvic.com.au

Shoplifter sought A WOMAN, pictured below, who may have been involved in two thefts from a Rye delicatessen is being sought by police. The first theft occurred on Wednesday 30 May and the second on Sunday 17 June. On each occasion the value of the theft was about $150. Anyone knowing the woman is asked to call Senior Constable Deidre Musgrave at the Rosebud police station, 5986 0444, or Crime Stoppers 1300 333 000.

A MAN died when the car he was driving crashed on Tubbarubba Road, near Balnarring Road, Merricks North, 5.45pm Wednesday 20 June.