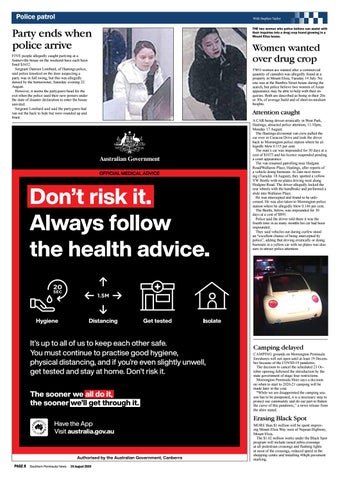 THE two women who police believe can assist with their inquiries into a drug crop found growing in a Mount Eliza house.

FIVE people allegedly caught partying at a Somerville house on the weekend have each been fined $1652. Sergeant Damien Lombard, of Hastings police, said police knocked on the door suspecting a party was in full swing, but this was allegedly denied by the homeowner, Saturday evening 22 August. However, it seems the partygoers head for the exit when the police used their new powers under the state of disaster declaration to enter the house univited. Sergeant Lombard said said the partygoers had run out the back to hide but were rounded up and fined.

TWO women are wanted after a commercial quantity of cannabis was allegedly found at a property in Mount Eliza, Tuesday 14 July. No one was at the Bambra Street house during the search, but police believe two women of Asian appearance may be able to help with their inquiries. Both are described as being in their 20s or 30s, of average build and of short-to-medium heights.

Camping delayed CAMPING grounds on Mornington Peninsula foreshores will not open until at least 19 December because of the COVID-19 pandemic. The decision to cancel the scheduled 23 October opening followed the introduction by the state government of stage four restrictions. Mornington Peninsula Shire says a decision on when to start to 2020-21 camping will be made later in the year. “While we are disappointed the camping season has to be postponed, it is a necessary step to protect our community and do our part to flatten the curve of this pandemic,” a news release from the shire stated.

Erasing Black Spot MORE than $1 million will be spent improving Mount Eliza Way west of Nepean Highway, Mount Eliza. The $1.02 million works under the Black Spot program will include raised zebra crossings at all pedestrian crossings and flashing lights at most of the crossings, reduced speed in the shopping centre and installing 40kph pavement marking.