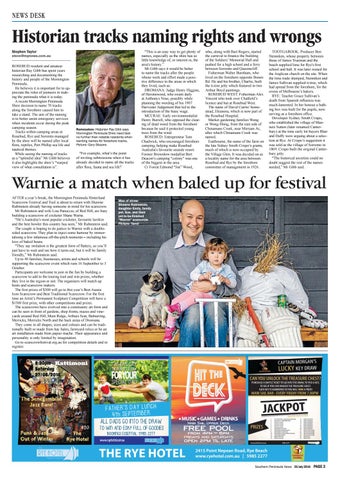 Historian tracks naming rights and wrongs Stephen Taylor steve@mpnews.com.au ROSEBUD resident and amateur historian Ray Gibb has spent years researching and documenting the history and people of the Mornington Peninsula. He believes it is important for to appreciate the roles of pioneers in making the peninsula what it is today. A recent Mornington Peninsula Shire decision to name 70 tracks along the foreshore caused him to take a stand. The aim of the naming is to better assist emergency services when incidents occur during the peak camping season. Tracks within camping areas at Rosebud, Rye and Sorrento managed by the shire will be named after local flora, reptiles, Port Phillip sea life and nautical themes. While seeing the naming of tracks as a “splendid idea” Mr Gibb believes it also highlights the shire’s “warped view of what consultation is”.

“For example, what’s the point of inviting submissions when it has already decided to name all the tracks after flora, fauna and sea life?

“This is an easy way to get plenty of names, especially as the shire has so little knowledge of, or interest in, the area's history.” Mr Gibb says it would be better to name the tracks after the people whose work and effort made a positive difference to the areas in which they lived, such as: DROMANA: Judge Henry Higgins, of Heronswood, who swam daily at Anthonys Nose, possibly while planning the wording of his 1907 Harvester Judgement that led to the introduction of the basic wage. MCCRAE: Early environmentalist Henry Burrell, who opposed the clearing of dead wood from the foreshore because he said it protected young trees from the wind. ROSEBUD: Entrepreneur Tom Chadwick, who encouraged foreshore camping, helping make Rosebud Australia's favourite seaside resort. Former Brownlow medallist Bert Deacon’s camping "colony" was one of the biggest in the area. Cr Forest Edmond “Joe” Wood,

who, along with Bart Rogers, started the carnival to finance the building of the Soldiers’ Memorial Hall and pushed for a high school and a ferry between Sorrento and Queenscliff. Fisherman Walter Burnham, who lived on the foreshore opposite Boneo Rd. He and his brother, Charlie, built the ti-tree jetty which featured in two Arthur Boyd paintings. ROSEBUD WEST: Fisherman Alex Vincent who took over Chatfield’s licence and hut at Rosebud West. The name of David Cairns’ homestead, Eleanora, which is now part of the Rosebud Hospital. Market gardening families Wong or Wong-Shing, from the east side of Chinamans Creek, near Mirriam Av, after which Chinamans Creek was named. Eastbourne, the name of the farm on the late Sidney Smith Crispo’s grants, much of which is now occupied by the Village Glen. It was decided on as a locality name for the area between Rosebud and Rye by the foreshore committee of management in 1926.

TOOTGAROOK: Producer Ben Stenniken, whose property between those of James Trueman and the beach supplied lime for Rye's first school and hall. It was later reused for the Anglican church on the site. When the lime trade slumped, Stenniken and James Sullivan supplied ti-tree, which had spread from the foreshore, for the ovens of Melbourne’s bakers. RYE: Teacher Grace Sullivan’s death from Spanish influenza was much-lamented. In her honour a bathing box was built for the pupils, now serving as a foreshore office. Developer Sydney Smith Crispo, who established the village of Manners Sutton (later renamed Canterbury) at the time early lot buyers Blair and Duffy were arguing about a selection at Rye. At Crispo’s suggestion it was sold as the village of Sorrento in 1869. Crispo built the original Canterbury jetty. “The historical societies could no doubt suggest the rest of the names needed,” Mr Gibb said.

Warnie a match when baled up for festival AFTER a year’s break, the Mornington Peninsula Hinterland Scarecrow Festival and Trail is about to return with Shawne Rubinstein already having someone in mind for his scarecrow. Mr Rubinstein and wife Lisa Panuccio, of Red Hill, are busy building a scarecrow of cricketer Shane Warne. “He’s Australia’s most popular cricketer, favourite larrikin and the best bowler this country has seen,” Mr Rubinstein said. The couple is hoping to do justice to Warnie with a doublesided scarecrow. They plan to inject some humour by immortalising a few infamous off-the-pitch moments – including his love of baked beans. “They say imitation is the greatest form of flattery, so you’ll just have to wait and see how it turns out, but it will be family friendly,” Mr Rubinstein said. Up to 40 families, businesses, artists and schools will be supporting the scarecrow event which runs 16 September to 3 October. Participants are welcome to join in the fun by building a scarecrow to add to the touring trail and win prizes, whether they live in the region or not. The organisers will match up hosts and scarecrow makers. The first prizes of $300 will go to this year’s Best Aussie Icon Scarecrow and Best Traditional Scarecrow. For the first time an Artist’s Permanent Sculpture Competition will have a $1500 first prize, with other competitions and prizes. The scarecrows have evolved into a community art form and can be seen in front of gardens, shop fronts, mazes and vineyards around Red Hill, Main Ridge, Arthurs Seat, Balnarring, Merricks, Merricks North and the back areas of Dromana. They come in all shapes, sizes and colours and can be traditionally built or made from hay bales, farmyard relics or be an art installation made from papier mache. Their appearance and personality is only limited by imagination. Go to scarecrowfestival.org.au for competition details and to register.