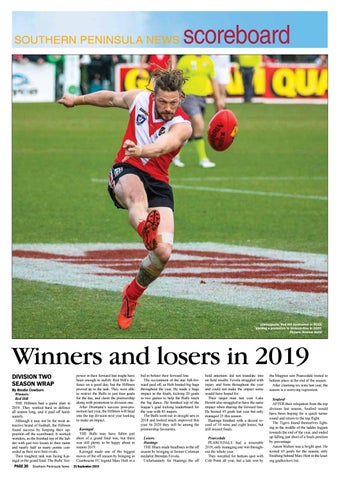 Unstoppable: Red Hill dominated in 2019, earning a promotion to Division One in 2020. Picture: Andrew Hurst

By Brodie Cowburn Winners: Red Hill THE Hillmen had a game plan in 2019. They worked hard in defence all season long, and it paid off handsomely. Although it may not be the most attractive brand of football, the Hillmen found success by keeping their opposition off the scoreboard. It worked wonders, as the finished top of the ladder with just two losses to their name and nearly half as many points conceded as their next best rivals. Their toughest task was facing Karingal in the grand final. The Bulls’ fire-

power in their forward line might have been enough to nullify Red Hill’s defence on a good day, but the Hillmen proved up to the task. They were able to restrict the Bulls to just four goals for the day, and claim the premiership along with promotion to division one. After Dromana’s success post-promotion last year, the Hillmen will head into the top division next year looking to make an impact. Karingal THE Bulls may have fallen just short of a grand final win, but there was still plenty to be happy about in season 2019. Karingal made one of the biggest moves of the off season by bringing in Cranbourne FC legend Marc Holt in a 25 September 2019

bid to bolster their forward line. The recruitment of the star full-forward paid off, as Holt booted big bags throughout the year. He made a huge impact in the finals, kicking 20 goals in two games to help the Bulls reach the big dance. He finished top of the league’s goal kicking leaderboard for the year with 85 majors. The Bulls went out in straight sets in 2018 and looked much improved this year. In 2020 they will be among the premiership favourites.

field attention did not translate into on field results. Fevola struggled with injury and form throughout the year and could not make the impact some would have hoped for. Their target man last year Luke Hewitt also struggled to have the same impact when sharing the forward line. He booted 45 goals last year but only managed 25 this season. Hastings finished with a decent record of 10 wins and eight losses, but still missed finals.

Losers: Hastings THE Blues made headlines in the off season by bringing in former Coleman medalist Brendan Fevola. Unfortunately for Hastings the off

Pearcedale PEARCEDALE had a miserable 2019, only managing one win throughout the whole year. They wrestled for bottom spot with Crib Point all year, but a late win by

the Magpies saw Pearcedale rooted to bottom place at the end of the season. After claiming six wins last year, the season is a worrying regression. Seaford AFTER their relegation from the top division last season, Seaford would have been hoping for a quick turnaround and return to the top flight. The Tigers found themselves fighting in the middle of the ladder logjam towards the end of the year, and ended up falling just short of a finals position by percentage. Aaron Walton was a bright spot. He scored 65 goals for the season, only finishing behind Marc Holt in the leading goalkickers list.