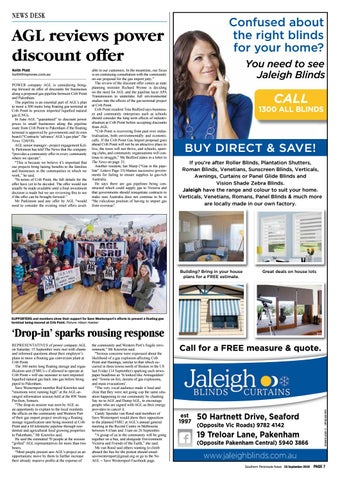 AGL reviews power discount offer Keith Platt keith@mpnews.com.au POWER company AGL is considering bringing forward its offer of discounts for businesses along a proposed gas pipeline between Crib Point and Pakenham. The pipeline is an essential part of AGL’s plan to moor a 300 metre long floating gas terminal at Crib Point to process imported liquefied natural gas (LNG). In June AGL “guaranteed” to discount power prices to small businesses along the pipeline route from Crib Point to Pakenham if the floating terminal is approved by governments and its own board (“Contracts ‘advance’ AGL’s gas plan” The News 12/6/18). AGL senior manager - project engagement Kelly Parkinson has told The News that the company “provides a community offer in every community where we operate”. “This is because we believe it’s important that our projects bring lasting benefits to the families and businesses in the communities in which we work,” he said. “In terms of Crib Point, the full details for the offer have yet to be decided. The offer would not usually be made available until a final investment decision is made but we are reviewing this to see if the offer can be brought forward.” Mr Parkinson said any offer by AGL “would need to consider the existing retail offers avail-

able to our customers. In the meantime, our focus is on continuing consultation with the community on our proposal for the gas import jetty.” The review of the discount offer comes as state planning minister Richard Wynne is deciding on the need for AGL and the pipeline layer APA Transmission to undertake full environmental studies into the effects of the gas terminal project at Crib Point. Crib Point resident Tina Bedford says businesses and community enterprises such as schools should consider the long term effects of industrialisation at Crib Point before accepting discounts from AGL. “Crib Point is recovering from past over industrialisation, both environmentally and economically. If the Crib Point Gas Import proposal goes ahead Crib Point will not be an attractive place to live, the town will not thrive, and schools, sporting clubs, and community organisations will continue to struggle,” Ms Bedford states in a letter to The News on page 33. Another resident, Ian Sharp (“Gas in the pipeline” Letters Page 33) blames successive governments for failing to ensure supplies to gas-rich Australia. He says there are gas pipelines being constructed which could supply gas to Victoria and that governments should renegotiate contracts to make sure Australia does not continue to be in “the ridiculous position of having to import gas from overseas”.

SUPPORTERS and members show their support for Save Westernport’s efforts to prevent a floating gas terminal being moored at Crib Point. Picture: Alison Hoelzer

the community and Western Port’s fragile environment,” Mr Knowles said. “Serious concerns were expressed about the likelihood of a gas explosion affecting Crib Point and Hastings, similar to that which occurred in three towns north of Boston in the US last Friday (14 September) sparking such newspaper headlines as ‘It looked like Armageddon’ and ‘Towns on fire, dozens of gas explosions, and mass evacuations’. “The very vocal audience made it loud and clear that they were not going cop the same situation happening to our community by chanting Say no to AGL and Dump AGL, to encourage people who are signed with AGL as their energy providers to cancel it. Candy Spender van Rood said members of Save Westernport would show their opposition to the planned FSRU at AGL’s annual general meeting at the Recital Centre in Melbourne between 9.45am and 11am on 26 September. “A group of us in the community will be going together on a bus, and alongside Environment Victoria and Friends of the Earth,” she said. Ms van Rood said others wanting to climb aboard the bus for the protest should email: savewesternport@gmail.org or go to the No AGL ~ Save Westernport Facebook page.

REPRESENTATIVES of power company AGL on Saturday 15 September were met with chants and informed questions about their employer’s plans to moor a floating gas conversion plant at Crib Point. The 300 metre long floating storage and regasification unit (FSRU) – if allowed to operate at Crib Point – will use seawater to turn imported liquefied natural gas back into gas before being piped to Pakenham. Save Westernport member Rod Knowles said “emotions were running high” at the AGL-arranged information session held at the RW Stone Pavilion, Somers. “The drop-in session was seen by AGL as an opportunity to explain to the local residents the effects on the community and Western Port of their gas import project involving a floating storage regasification unit being moored at Crib Point and a 60 kilometre pipeline through residential and agricultural food growing properties to Pakenham,” Mr Knowles said. He said the estimated 70 people at the session “grilled” AGL representatives for more than two hours. “Most people present saw AGL’s project as an opportunistic move by them to further increase their already massive profits at the expense of