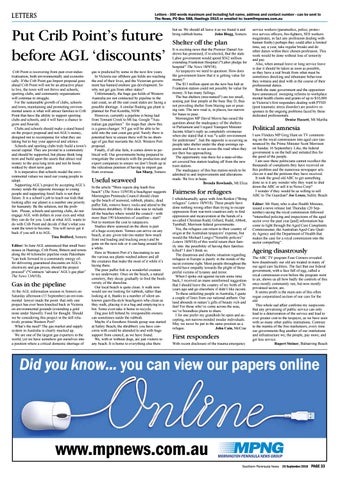 Put Crib Point’s future before AGL ‘discounts’ Crib Point is recovering from past over-industrialisation, both environmentally and economically. If the Crib Point gas Import proposal goes ahead Crib Point will not be an attractive place to live, the town will not thrive and schools, sporting clubs, and community organisations will continue to struggle. For the sustainable growth of clubs, schools and town, maintaining and promoting environmental assets is what will attract families to Crib Point that have the ability to support sporting clubs and schools, and it will have a chance to grow and flourish. Clubs and schools should make a stand based on the project proposal and not AGL’s money, designed not to recompense for what they are taking but to buy your approval and silence. Schools and sporting clubs truly build a town’s social capital. They are pivotal to a community and should be supported, but please think long term and build upon the assets that attract real money to the area long term and not be hoodwinked by short term gain. It is imperative that schools model the environmental values we need our young people to adopt. Supporting AGL’s project by accepting AGL’s money sends the opposite message to young people and supporting fossil fuels is not their future. It is a school’s job to teach our kids that looking after our planet is a number one priority for humanity. Be the solution, not the problem. Please, schools and sporting clubs, do not engage AGL with dollars in your eyes and what they can do for you. Look at what AGL wants to do with Crib Point and decide if that’s what you want the town to become. You will never get it back if you sell it to AGL. Tina Bedford, Somers Editor: In June AGL announced that small businesses in Hastings, Crib Point, Bittern and towns along the 60 kilometre pipeline route Pakenham “can look forward to a community energy offer delivering guaranteed discounts on AGL’s electricity and gas prices, should the project proceed” (“Contracts ‘advance’ AGL’s gas plan” The News 13/6/18).

Gas in the pipeline At the AGL information session in Somers on Saturday afternoon (15 September) an environmental lawyer made the point that only one project has ever been knocked back in Victoria on environmental grounds (extending a gold mine under Stawell). Food for thought. Should we be considering this project in the still relatively pristine Western Port? What’s the need? The gas market and supply system in Australia is clearly mucked up. We are one of the largest gas exporters in the world, yet we have somehow got ourselves into a position where a critical domestic shortage of

gas is predicted by some in the next few years. In Victoria our offshore gas fields are reaching the end of their lives, and the Victorian government has banned onshore gas development. So why not get gas from other states? Unfortunately, the huge gas fields of Western Australia are not connected by pipeline to the east coast, so all the east coast states are facing a possible shortage. A similar floating gas plant is planned for Port Kembla, NSW. However, currently a pipeline is being laid from Tennant Creek to Mt Isa. Google “Australian gas pipelines” for maps that show this is a game-changer: NT gas will be able to be sold into the east coast gas grid. Surely there is potential here to ensure there will be no shortage of gas that warrants the AGL Western Port proposal. Finally, if all else fails, it comes down to political will. Our governments being prepared to renegotiate the contracts with the production and export companies to ensure we don’t finish up in the ridiculous position of having to import gas from overseas. Ian Sharp, Somers

Useful seaweed In the article “Shire rejects dog leash free beach” (The News 11/9/18) a beachgoer suggests Mornington Peninsula Council should clean up the beach of seaweed, rubbish, plastic, dead puffer fish, remove heavy rocks and attend to the foreshore shrubbery. If this idea was to include all the beaches where would the council - with more than 190 kilometres of coastline - start? Not to mention the cost to ratepayers. Studies show seaweed on the shore is part of a huge ecosystem. Tonnes can arrive on any beach, at any given tide (no matter how much front end loading and trucking away) and be gone on the next tide or it can hang around for a while. Here in Western Port it’s fascinating to see the various sea plants washed ashore and all the creatures that make the most of it while it’s laying there. The poor puffer fish is a wonderful creature to see underwater. Once on the beach, a natural cemetery, they decay gradually to feed the biodiversity of the shoreline. Our local beach is quite clean. A walk now would see me looking for rubbish, rather than looking at it, thanks to a number of silent unknown guerrilla-style beachgoers who clean as they walk, placing it in a bag and emptying to a bin. Some even take it home to recycle. Dog poo left behind by irresponsible owners can sometimes outdo the rubbish. Maybe if a foreshore friends group was started at Safety Beach, the shrubbery you have concerns with could be attended to and with huge support from council, as we have found. We, with or without dogs, are just visitors to any beach. It is home to everything else there

but us. We should all leave it as we found it and bring rubbish home. John Blogg, Somers

Shelter off the plan It is exciting news that the Premier Daniel Andrews has promised, if re-elected, that the state Labor government would spend $562 million extending Frankston Hospital (“Labor pledge for hospital” The News 18/9/18). As taxpayers we need to question: How does the government know that it is getting value for money? The $13 million spent on the new bus hub at Frankston station could not possibly be value for money. It has many failings. The bus shelters (mis-named?) are too small, seating just four people at the busy Bay D, thus not providing shelter from blazing sun or pouring rain. The new road is, in places, too narrow for buses to pass. Mornington MP David Morris has raised the question about the inadequacy of the shelters in Parliament and I regard Transport Minister Jacinta Allan’s reply as completely erroneous when she stated that it was “a safer environment for pedestrians”. Just the opposite is occurring as people take shelter under the shop awnings opposite and have to run across the road when they see their bus approaching. The opportunity was there for a state-of-theart covered bus station leading off from the new train station. The inadequacy of this bus station needs to be admitted to and improvements and alterations made. We live in hope. Brenda Rowlands, Mt Eliza

Fairness for refugees I wholeheartedly agree with Ann Renkin (“Bring refugees” Letters 18/9/18). These people have done nothing wrong other than trying to escape oppression from war-torn countries only to find oppression and incarceration at the hands of a so-called Christian Rudd, Gillard, Rudd, Abbott, Turnbull, Morrison federal governments. Yes, the refugees can return to their country of origin at the Australian taxpayers’ expense, but would the Michael Longs (“Sensible policies” Letters 18/9/18) of this world return their family into the possibility of having their families killed? I don’t think so. The disastrous and chaotic situation regarding refugees in Europe is purely in the minds of the racist extreme right. Most people throughout the world have empathy towards the plight of these pitiful victims of tyranny and terror. When I spoke out against racism some time back, I received an inane uninformed suggestion that I should leave the country of my birth of 76 years ago and go elsewhere if didn’t like racism. To these unfeeling people in Australia, I quote a couple of lines from our national anthem: Our land abounds in nature’s gifts of beauty rich and fair/ For those who’ve come across the seas, we’ve boundless plains to share. I for one prefer my grandkids be open and accepting, not narrow-minded insular individuals. May we never be put in the same position as a refugee. John Cain, McCrae

First responders With recent disclosure of the trauma emergency

service workers (paramedics, police, protective service officers, fire-fighters, SES workers magistrates, in fact any profession dealing with human frailty) perhaps they could after a limited time, say a year, take regular breaks and do other duties within their chosen profession. This work would be done without loss of seniority and pay. Also, when annual leave or long service leave is due it should be taken as soon as possible, so they have a real break from what must be sometimes shocking and inhumane behaviour they witness and deal with in the course of their professional duties. Both the state government and the opposition have announced sweeping reforms to workplace mental health claims and grants of up to $10,000 to Victoria’s first responders dealing with PTSD (post traumatic stress disorder) are positive responses to the ongoing problems faced by these dedicated professionals. Denise Hassett, Mt Martha

Political amnesia I saw Flinders MP Greg Hunt on TV commenting on the royal commission into aged care (announced by the Prime Minister Scott Morrison on Sunday 16 September). Like, the federal government is on the ball and initiated this for the good of the people. I am sure these politicians cannot recollect the thousands of complaints they have received on this problem and the numerous newspaper articles on it and the petitions they have received. It took the good old ABC to get something done so is it any wonder why they want to shut down the ABC or sell it to News Corp? I wonder if they would be as willing to sell ABC to The Guardian? Joe Lenzo, Safety Beach Editor: Mr Hunt, who is also Health Minister, issued a news release last Thursday (20 September) saying the royal commission followed “intensified policing and inspections of the aged sector over the past year [and] information has come to light through the Aged Care Complaints Commissioner, the Australian Aged Care Quality Agency and the Department of Health that makes the case for a royal commission into the sector compelling”.

Ageing disastrously The ABC TV program Four Corners revealed how disastrously our old are treated in many of our aged care facilities. The fact that our federal government, with a face full of egg, called a royal commission even before the program went to air, shows us all how badly the controls of this once mostly community run, but now mostly privatised sector, are. It seems profit is the main aim of this often rogue corporatised section of our care for the old. This whole sad affair confirms my suspicions that any privatising of public service can only lead to a deterioration of the service and lead to ever greater cost to the taxpayer, as we have seen with so many other public institutions. Contrary to the mantra of the free marketeers, every time our governments flog another of our institutions and infrastructure we, the people, pay more, and get less service. Rupert Steiner, Balnarring Beach