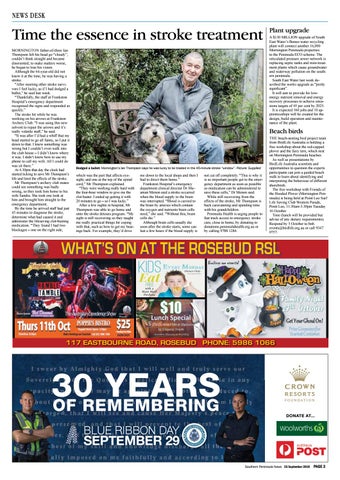 Time the essence in stroke treatment MORNINGTON father-of-three Ian Thompson felt his head go “cloudy”, couldn’t think straight and became disoriented; to make matters worse, he began to lose his vision. Although the 64-year-old did not know it at the time, he was having a stroke. “After meeting other stroke survivors I feel lucky, as if I had dodged a bullet,” he said last week. “Thankfully, the staff at Frankston Hospital’s emergency department recognised the signs and responded so quickly.” The stroke hit while he was working on his arrows at Frankston Archery Club. “I was using this new solvent to repair the arrows and it’s really volatile stuff,” he said. “It was after I’d had a whiff that my head started to go all funny, so I put it down to that. I knew something was wrong but I couldn’t even walk into the club house – I didn’t know where it was. I didn’t know how to use my phone to call my wife. All I could do was sit there.” At 4.30pm that day the clock had started ticking to save Mr Thompson’s life and limit the effects of the stroke. Mr Thompson’s archery club mates could see something was badly wrong, so they took him home to his wife Sandra. She took one look at him and brought him straight to the emergency department. By the time he arrived staff had just 45 minutes to diagnose the stroke, determine what had caused it and administer the lifesaving clot-busting medication. “They found I had two blockages – one on the right side,

Plant upgrade A $130 MILLION upgrade of South East Water’s Boneo water recycling plant will connect another 16,000 Mornington Peninsula properties to the Peninsula ECO scheme. The reticulated pressure sewer network is replacing septic tanks and mini-treatment plants which cause groundwater and waterway pollution on the southern peninsula. South East Water last week described the works upgrade as “pretty significant”. It will aim to provide for lowenergy nutrient removal and energy recovery processes to achieve emissions targets of 45 per cent by 2025. It is expected 160 jobs and 10 apprenticeships will be created for the design, build operation and maintenance of the plant.

Dodged a bullet: Mornington’s Ian Thompson says he was lucky to be treated in the 45-minute stroke “window”. Picture: Supplied

which was the part that affects eyesight, and one at the top of the spinal cord,” Mr Thompson explained. “They were working really hard with the four-hour window to give me the clot buster. I ended up getting it with 20 minutes to go – so I was lucky.” After a few nights in hospital, Mr Thompson was able to go home and onto the stroke detours program. “My sight is still recovering so they taught me really practical things for coping with that, such as how to get my bearings back. For example, they’d drive

me down to the local shops and then I had to direct them home.” Frankston Hospital’s emergency department clinical director Dr Shyaman Menon said a stroke occurred when the blood supply to the brain was interrupted. “Blood is carried to the brain by arteries which contain the oxygen and nutrients brain cells need,” she said. “Without this, brain cells die.” Although brain cells usually die soon after the stroke starts, some can last a few hours if the blood supply is

not cut off completely. “This is why it is so important people get to the emergency department as soon as possible so medication can be administered to save these cells,” Dr Menon said. While still recovering from the effects of the stroke, Mr Thompson is back caravanning and spending time with his grandchildren. Peninsula Health is urging people to fast track access to emergency stroke care, close to home, by donating to donations.peninsulahealth.org.au or by calling 9788 1284.

THE beach-nesting bird project team from BirdLife Australia is holding a free workshop about the red-capped plover and the fairy tern, which nest on Mornington Peninsula beaches. As well as presentations by BirdLife Australia scientists and opportunities to question the experts participants can join a guided beach walk to learn about identifying and interpreting the behaviour of different shorebirds. The free workshop with Friends of the Hooded Plover (Mornington Peninsula) is being held at Point Leo Surf Life Saving Club Western Parade, Point Leo, 11.30am-3.30pm Tuesday 16 October Time (lunch will be provided but advise of any dietary requirements). Respond by 5 October to bnb. events@birdlife.org.au or call 9347 0757.