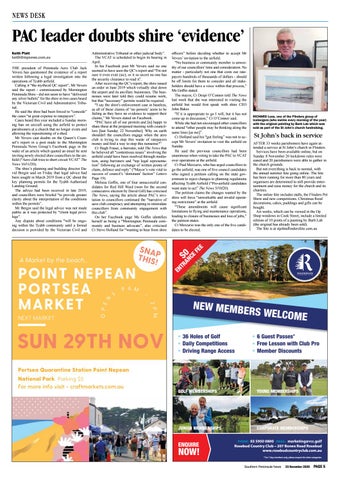 PAC leader doubts shire ‘evidence’ THE president of Peninsula Aero Club Jack Vevers has questioned the existence of a report written following a legal investigation into the operations of Tyabb airfield. Calling it “the mythical QC report”, Mr Vevers said the report - commissioned by Mornington Peninsula Shire - did not seem to have “delivered any silver bullets” for the shire in two cases heard by the Victorian Civil and Administrative Tribunal. He said the shire had been forced to “concede” the cases “at great expense to ratepayers”. Cases heard this year included a Sunday morning ban on aircraft using the airfield to protect parishioners at a church that no longer exists and allowing the repositioning of a shed. Mr Vevers cast doubts on the Queen’s Counsel’s report in a post made to the Mornington Peninsula News Group’s Facebook page in the wake of an article which quoted an email he sent inviting newly elected shire councillors to the airfield (“Aero club tries to short circuit VCAT” The News 16/11/20). The shire’s planning and building director David Bergin said on Friday that legal advice had been sought in March 2019 from a QC about the key planning permits for the Tyabb Authorised Landing Ground. The advice had been received in late 2019, and councillors were briefed “to provide greater clarity about the interpretation of the conditions within the permits”. Mr Bergin said the legal advice was not made public as it was protected by “client legal privilege”. Any dispute about conditions “will be ongoing within the Tyabb community until a formal decision is provided by the Victorian Civil and

Administrative Tribunal or other judicial body”. The VCAT is scheduled to begin its hearing in April. In his Facebook post Mr Vevers said no one seemed to have seen the QC’s report and “I&#39;m not sure it even exist (sic), or it so secret no one has the security clearance to read it”. After receiving the QC’s report, the shire issued an order in June 2019 which virtually shut down the airport and its ancillary businesses. The businesses were later told they could resume work, but that “necessary” permits would be required. “I say the shire&#39;s enforcement case in baseless, as all of these claims of ‘no permits’ seem to be failing as they have no evidence to support their claims,” Mr Vevers stated on Facebook. “PAC have all of our permits and [is] happy to share these at the proposed meeting with councillors [last Sunday 22 November]. Why on earth shouldn&#39;t the councillors engage when the aero club is trying to stop this waste of ratepayers money and find a way to stop this nonsense?” Cr Hugh Fraser, a barrister, told The News that he believed all “contentious issues” involving the airfield could have been resolved through mediation, using barristers and “top legal representation” following an exchange of written points of claim, defence and reply” (“Mayor’s vote vital to success of council’s ‘dominant’ faction” Letters Page 19). Melissa Goffin, one of four unsuccessful candidates for Red Hill Ward (won for the second consecutive election by David Gill) has criticised The News, saying the article about PAC’s invitation to councillors continued the “narrative of aero club conspiracy and attempting to intimidate councillors from community engagement with this club”. On her Facebook page Ms Goffin identifies herself as being a “Mornington Peninsula community and business advocate”, also criticised Cr Steve Holland for “wanting to hear from shire

officers” before deciding whether to accept Mr Vevers’ invitation to the airfield. “No business or community member is unworthy of our councillors’ time and consideration. No matter - particularly not one that costs our ratepayers hundreds of thousands of dollars - should be off limits for them to consider and all stakeholders should have a voice within that process,” Ms Goffin stated. The mayor, Cr Despi O’Connor told The News last week that she was interested in visiting the airfield but would first speak with shire CEO John Baker. “If it is appropriate to go I will, but it has not come up in discussion,” Cr O’Connor said. While she had not encouraged other councillors to attend “other people may be thinking along the same lines [as me]”. Cr Holland said his “gut feeling” was not to accept Mr Vevers’ invitation to visit the airfield on Sunday. He said the previous councillors had been unanimous when voting to take the PAC to VCAT over operations at the airfield. Cr Paul Mercurio, who has urged councillors to go the airfield, was one of five council candidates who signed a petition calling on the state government to reject changes to planning regulations affecting Tyabb Airfield (“Pro-airfield candidates want state to act” The News 5/10/20). The petition claims the changes wanted by the shire will force “unworkable and invalid operating restrictions” at the airfield. “These amendments will cause significant limitations to flying and maintenance operations, leading to closure of businesses and loss of jobs,” the petition states. Cr Mercurio was the only one of the five candidates to be elected.

RICHARD Lees, one of the Flinders group of Icebergers (who swims every morning of the year) with the original painting by Barb Lab which was sold as part of the St John’s church fundraising.

St John’s back in service AFTER 33 weeks parishioners have again attended a service at St John’s church in Flinders. Services have been available online, but on Sunday 8 November 20 lockdown rules were eased and 20 parishioners were able to gather in the church grounds. But not everything is back to normal, with the annual summer fete going online. The fete has been running for more than 80 years and organisers are determined to still provide entertainment and raise money for the church and its charities. The online fete includes stalls, the Flinders Pet Show and new competitions. Christmas floral decorations, cakes, puddings and gifts can be bought. Art works, which can be viewed in the Op Shop windows in Cook Street, include a limited edition of 10 prints of a painting by Barb Lab (the original has already been sold). The fete is at stjohnsflindersfete.com.au