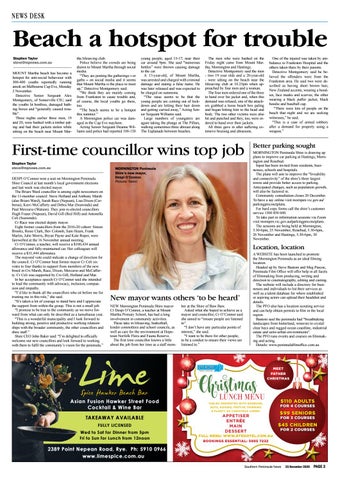 tha lifesaving club. Police believe the crowds are being drawn to Mount Martha through social media. “They are posting the gatherings – or gaths – on social media and it seems that Mount Martha is the place to meet up,” Detective Montgomery said. “We think they are mainly coming from Frankston to cause trouble and, of course, the local youths go there, too. “The beach seems to be a hotspot this summer.” A Mornington police car was damaged in the Cup Eve mayhem. Acting Senior Sergeant Deanne Williams said police had reported 100-150

young people, aged 15-17, near their car around 9pm. She said “numerous bottles” were thrown causing damage to the car. A 15-year-old, of Mount Martha, was arrested and charged with criminal damage and stating a false name. He was later released and was expected to be charged on summons. “The issue seems to be that the young people are coming out of lockdown and are letting their hair down and getting carried away,” Acting Senior Sergeant Williams said. Large numbers of youngsters are again taking the plunge at The Pillars, walking sometimes three abreast along The Esplanade between beaches.

The men who were bashed on the Friday night came from Mount Martha, Mornington and Hastings. Detective Montgomery said the men - two 19 year olds and a 20-year-old - were sitting on the beach near the lifesaving club at 10.25pm when approached by four men and a woman. The four men ordered one of the three to hand over his jacket and, when this demand was refused, one of the attackers grabbed a loose beach box paling and began hitting him to the head and body. The two other victims were also hit and punched and they, too, were ordered to hand over their jackets. All three gave in after suffering extensive bruising and abrasions.

First-time councillor wins top job Stephen Taylor steve@mpnews.com.au DESPI O’Connor won a seat on Mornington Peninsula Shire Council at last month’s local government elections and last week was elected mayor. The Briars Ward councillor is among eight newcomers on the 11-member council: Steve Holland and Anthony Marsh (also Briars Ward), Sarah Race (Nepean), Lisa Dixon (Cerberus), Kerri McCafferty and Debra Mar (Seawinds) and Paul Mercurio (Watson). They join re-elected councillors Hugh Fraser (Nepean), David Gill (Red Hill) and Antonella Celi (Seawinds). Cr Race was elected deputy mayor. Eight former councillors from the 2016-20 cohort: Simon Brooks, Rosie Clark, Bev Colomb, Sam Hearn, Frank Martin, Julie Morris, Bryan Payne and Kate Roper, were farewelled at the 16 November annual meeting. Cr O’Connor, a teacher, will receive a $100,434 annual allowance and fully-maintained car. Her colleagues will receive a $31,444 allowance. The mayoral vote could indicate a change of direction for the council. Cr O’Connor beat former mayor Cr Celi six votes to four thanks to support from members of the new breed in Crs Marsh, Race, Dixon, Mercurio and McCafferty. Cr Celi was supported by Crs Gill, Holland and Mar. In her acceptance speech Cr O’Connor said she intended to lead the community with advocacy, inclusion, compassion and empathy. “I’d like to thank all the councillors who sit before me for trusting me in this role,” she said. “It’s taken a lot of courage to stand here and I appreciate the support from within the group. This is not a small job. “I promise to be true to the community as we move forward from what can only be described as a tumultuous year. “This is a wonderful municipality and I look forward to building strong, positive and productive working relationships with the broader community, the other councillors and shire staff.” Shire CEO John Baker said: “I’m delighted to officially welcome our new councillors and look forward to working with them to fulfil the community’s vision for the peninsula.”

One of the injured was taken by ambulance to Frankston Hospital and the others taken there by their parents. Detective Montgomery said he believed the offenders were from the Frankston area. He said two were described as having short brown hair, New Zealand accents, wearing a hoodies, face masks and scarves; the other wearing a black puffer jacket, black hoodie and baseball cap. “There were lots of people on the beach that night and we are seeking witnesses,” he said. “This is a case of armed robbery after a demand for property using a weapon.”

Better parking sought MORNINGTON Peninsula Shire is drawing up plans to improve car parking at Hastings, Mornington and Rosebud. Input has been invited from residents, businesses, schools and hospitals. The plans will aim to improve the “liveability and connectivity” of the shire’s three largest towns and provide better access to parking. Anticipated changes, such as population growth, will also be factored in. Community consultation closes 20 December. To have a say online visit mornpen.vic.gov.au/ parkingprecinctplans. For hard copy forms call the shire’s customer service 1300 850 600. To take part in information sessions via Zoom visit mornpen.vic.gov.au/parkingprecinctplans. The sessions are being held at Mornington, 5.30-6pm, 25 November; Rosebud, 5.30-6pm, 26 November and Hastings, 5.30-6pm, 30 November.

Location, location A WEBSITE has been launched to promote the Mornington Peninsula as an ideal filming location. Headed up by Steve Bastoni and Meg Pascoe, Peninsula Film Office will offer help in all facets of filmmaking from producing, writing and direction to cinematography, editing and casting. The website will include a directory for businesses and individuals to list their services as well as a talent database for where established or aspiring actors can upload their headshot and details. The PFO also has a location scouting service and can help obtain permits to film in the local region. Bastoni said the peninsula had “breathtaking landscapes from hinterland, wineries to crystal clear bays and rugged ocean coastline, industrial estate and semi-urban environments”. The PFO runs events and courses on filmmaking and acting. Details: www.peninsulafilmoffice.com.au

New mayor wants others ‘to be heard’ NEW Mornington Peninsula Shire mayor Cr Despi O’Connor, a teacher at Mount Martha Primary School, has had a long involvement in community activities. These take in lifesaving, basketball, kinder committees and school councils, as well as care for the environment at Hopetoun Norfolk Flora and Fauna Reserve. The first time councillor knows a little about the job from her time as a staff mem-

ber at the Shire of Baw Baw. Asked what she hoped to achieve as a mayor and councillor, Cr O’Connor said she aimed to “ensure people are listened to”. “I don’t have any particular points of interest,” she said. “I want to be there for other people; to be a conduit to ensure their views are listened to.”