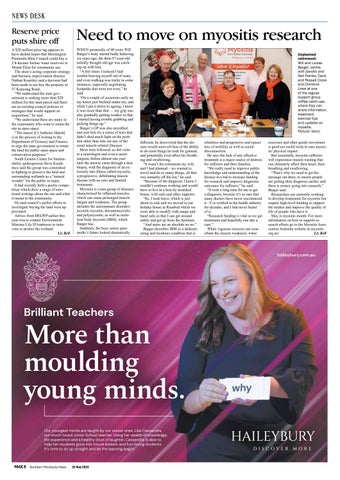 Need to move on myositis research

A $20 million price tag appears to have dashed hopes that Mornington Peninsula Shire Council could buy a 2.8-hectare former water reservoir in Mount Eliza for community use. The shire’s acting corporate strategy and business improvement director Nathan Kearsley said a decision had been made to not buy the property at 57 Kunyung Road. “We understand the state government is seeking more than $20 million for this land parcel and there are no existing council policies or strategies that would support its acquisition,” he said. “We understand there are many in the community who want to retain the site as open space. “The mayor [Cr Anthony Marsh] is in the process of writing to the Department of Treasury and Finance to urge the state government to retain the land for public open space and conservation purposes.” South Eastern Centre for Sustainability spokesperson Steve Karakitsos said the group was committed to fighting to preserve the land and surrounding wetlands as a “natural wonder” for the public to enjoy. It had recently held a poetry competition which drew a range of emotional writings about the site and what it meant to the community. He said council’s earlier efforts to investigate buying the land were appreciated. Advice from DELWP earlier this year was to contact Environment Minister Lily D&#39;Ambrosio to intervene to protect the wetland. Liz Bell

WHEN paramedic of 40 years Will Barger’s body started badly behaving six years ago, the then-57-year-old initially thought old age was catching up with him. “A few times I noticed I had trouble heaving myself out of seats, and even walking was tricky in some instances, especially negotiating footpaths that were not even,” he said. “On a couple of occasions early on my knees just buckled under me, and while I put it down to ageing, I knew it was more than that … my grip was also gradually getting weaker so that I started having trouble grabbing and picking things up.” Barger’s GP was also mystified and sent him for a series of tests that didn’t shed much light on the problem other than rule out any of the usual muscle-related illnesses. More tests followed, as did visits to a neurologist and even a neuro surgeon, before almost one year later the answer came through a skin biopsy, with the diagnosis of an extremely rare illness called myositis, a progressive, debilitating muscle disease with no cure and limited treatments. Myositis is a rare group of diseases characterised by inflamed muscles, which can cause prolonged muscle fatigue and weakness. The group includes the autoimmune disorders juvenile myositis, dermatomyositis and polymyositis, as well as inclusion body myositis (IBM), which Barger has. Suddenly, the busy senior paramedic’s future looked dramatically

Unplanned retirement: Will and Louise Barger, centre, with Sandra and Neil Franks, Carol and Russell Crook and Christine Lowe at one of the regular support group coffee catch-ups, where they can share information, treatment, exercise tips and updates on myositis. Picture: Yanni different, he discovered that the disease would soon rob him of the ability to do most things he took for granted, and potentially even affect his breathing and swallowing. “It wasn’t the retirement my wife and I had planned – we wanted to travel and do so many things, all that was instantly off the list,” he said. “Because of the diagnosis I knew I couldn’t continue working and would have to live in a heavily modified house, with rails and other supports. “So, I took leave, which is just about to end, and we moved to our holiday house in Rosebud which we were able to modify with ramps and hand rails so that I can get around safely and get up from the furniture. “And stairs are an absolute no no.” Barger describes IBM as a disheartening and insidious condition that is

relentless and progressive and causes loss of mobility as well as social disconnection. He says the lack of any effective treatment is a major source of distress for sufferers and their families. “We really need to improve public knowledge and understanding of the disease in a bid to increase funding for research and improve diagnostic outcomes for sufferers,” he said. “It took a long time for me to get a diagnosis, because it’s so rare that many doctors have never encountered it - I’ve worked in the health industry for decades, and I had never heard of it. “Research funding is vital so we get treatments and hopefully one day a cure.” While vigorous exercise can exacerbate the muscle weakness, water

exercises and other gentle movement is good are useful tools to ease myositis&#39; physical impact. But essentially, myositis sufferers will experience muscle wasting that can ultimately affect their heart, their breathing and swallowing. “That’s why we need to get the message out there, to ensure people are getting their diagnosis earlier, and there is money going into research,” Barger said. Researchers are currently working to develop treatments for myositis but require high-level funding to support the studies and improve the quality of life of people who have it. May is myositis month. For more information on how to support research efforts go to the Myositis Association Australia website at myositis. org.au/ Liz Bell

More than moulding young minds. Our youngest minds are taught by our wisest ones. Like Cassandra, our much-loved Junior School teacher. Using her wealth of knowledge, life experience and a healthy dose of laughter, Cassandra is able to help her students grow into future leaders and fun-loving students. It’s time to sit up straight and let the learning begin!