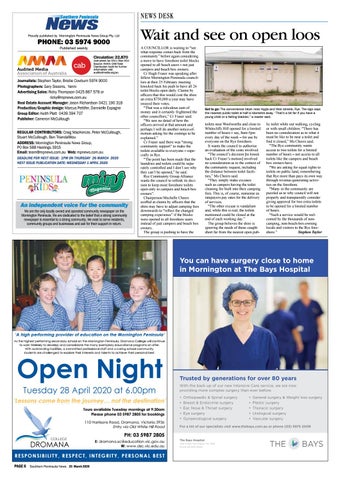 Wait and see on open loos

A COUNCILLOR is waiting to “see what response comes back from the community” before again considering a move to have foreshore toilet blocks opened to all beach users – not just campers and beach box owners. Cr Hugh Fraser was speaking after fellow Mornington Peninsula councillors at their 25 February meeting knocked back his push to have all 26 toilet blocks open daily. Claims by officers that this would cost the shire an extra $750,000 a year may have swayed their votes. “That was a ridiculous sum of money and it certainly frightened the other councillors,” Cr Fraser said. “We saw no detail of how the officers arrived at that amount and perhaps I will do another notice-ofmotion asking for the costings to be explained.” Cr Fraser said there was “strong community support” to make the toilets available to everyone – especially in Rye. “The point has been made that the laundries and toilets could be separately controlled and I don’t see why they can’t be opened,” he said. Rye Community Group Alliance wants the council to rethink its decision to keep most foreshore toilets open only to campers and beach box owners”. Chairperson Mechelle Cheers scoffed at claims by officers that the shire may have to adjust camping fees downwards to “reflect the changed camping experience” if the blocks were opened to all foreshore users instead of just campers and beach box owners. The group is pushing to have the

Got to go: The convenience block near Hygia and Weir streets, Rye. The sign says the nearest public toilet is half a kilometre away. “That’s a bit far if you have a young child or a failing bladder,” a reader said.

toilets near Woolworths and close to Whitecliffs Hill opened for a limited number of hours – say, 8am-5pm every day of the week – for use by everyone on the Rye foreshore. It wants the council to authorise an evaluation of the costs involved. “The council’s decision [to knock back Cr Fraser’s motion] involved no consideration as to the context of the community request, including the distance between toilet facilities,” Ms Cheers said. “They simply make excuses: such as campers having the toilet cleaning fee built into their camping fees. This is, of course, nonsense as ratepayers pay rates for the delivery of services. “The other excuse is vandalism and, while this is real, the toilets mentioned could be closed at the end of each working day.” The group believes the shire is ignoring the needs of those caught short far from the nearest open pub-

‘A high performing provider of education on the Mornington Peninsula’ As the highest performing secondary school on the Mornington Peninsula, Dromana College will continue to work tirelessly to develop and consolidate the many exemplary educational programs on offer. With outstanding facilities, a committed professional staff and a caring school community, students are challenged to explore their interests and talents to achieve their personal best.

lic toilet while out walking, cycling or with small children. “There has been no consideration as to what it must be like to be near a toilet and find it closed,” Ms Cheers said. “The Rye community wants access to two toilets for a limited number of hours – not access to all toilets like the campers and beach box owners have. “We are asking for equal rights to toilets on public land, remembering that Rye more than pays its own way through revenue-generating activities on the foreshore. “Many in the community are puzzled as to why council will not properly and transparently consider giving approval for two extra toilets to be opened for a limited number of hours. “Such a service would be welcomed by the thousands of noncamping, non-beach-box-owning locals and visitors to the Rye foreshore.” Stephen Taylor