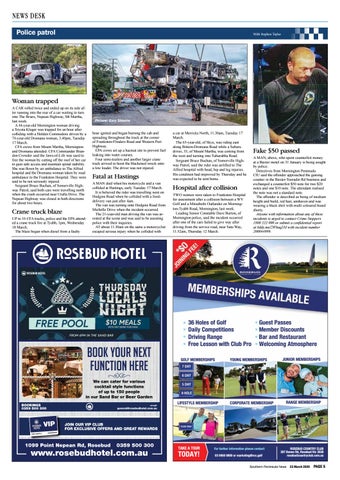 Woman trapped A CAR rolled twice and ended up on its side after running into the rear of a car waiting to turn into The Briars, Nepean Highway, Mt Martha, last week. A 44-year-old Mornington woman driving a Toyota Kluger was trapped for an hour after colliding with a Holden Commodore driven by a 74-year-old Dromana woman, 3.40pm, Tuesday 17 March. CFA crews from Mount Martha, Mornington and Dromana attended. CFA Commander Brandon Crowder said the Jaws-of-Life was used to free the woman by cutting off the roof of her car to gain safe access and maintain spinal stability. She was flown by air ambulance to The Alfred hospital and the Dromana woman taken by road ambulance to the Frankston Hospital. They were said to be not seriously injured. Sergeant Bruce Buchan, of Somerville Highway Patrol, said both cars were travelling north when the crash occurred near Uralla Drive. The Nepean Highway was closed in both directions for about two hours.

Crane truck blaze UP to 16 CFA trucks, police and the EPA attended a crane truck fire at Tyabb, 1pm, Wednesday 18 March. The blaze began when diesel from a faulty

Picture: Gary Sissons hose ignited and began burning the cab and spreading throughout the truck at the corner of Frankston-Flinders Road and Western Port Highway. EPA crews set up a hazmat site to prevent fuel leaking into water courses. Four semi-trailers and another larger crane truck arrived to hoist the blackened wreck onto a low loader. The driver was not injured.

Fatal at Hastings A MAN died when his motorcycle and a van collided at Hastings, early Tuesday 17 March. It is believed the rider was travelling west on Hodgins Road when he collided with a fooddelivery van just after 4am. The van was turning onto Hodgins Road from Michelle Drive when the incident occurred. The 21-year-old man driving the van was arrested at the scene and was said to be assisting police with their inquiries. AT about 11.30am on the same a motorcyclist escaped serious injury when he collided with

BOOK YOUR NEXT FUNCTION HERE

a car at Merricks North, 11.30am, Tuesday 17 March. The 65-year-old, of Skye, was riding east along Bittern-Dromana Road while a Subaru driver, 35, of Mount Martha, was coming from the west and turning into Tubarubba Road. Sergeant Bruce Buchan, of Somerville Highway Patrol, said the rider was airlifted to The Alfred hospital with head, hip and leg injuries. His condition had improved by Thursday and he was expected to be sent home.

Fake $50 passed A MAN, above, who spent counterfeit money at a Baxter motel on 31 January is being sought by police. Detectives from Mornington Peninsula CIU said the offender approached the gaming counter in the Baxter-Tooradin Rd business and exchanged a counterfeit $50 note for two $20 notes and one $10 note. The attendant realised the note was not a standard note. The offender is described as being of medium height and build, red hair, unshaven and was wearing a black shirt with multi coloured board shorts. Anyone with information about any of these incidents is urged to contact Crime Stoppers 1800 333 000 or submit a confidential report at bddy.me/2Whuq5M with incident number 200044999.

Hospital after collision TWO women were taken to Frankston Hospital for assessment after a collision between a WV Golf and a Mitsubishi Outlander on Mornington-Tyabb Road, Mornington, last week. Leading Senior Constable Dave Burton, of Mornington police, said the incident occurred after one of the cars failed to give way after driving from the service road, near Satu Way, 11.52am, Thursday 12 March.