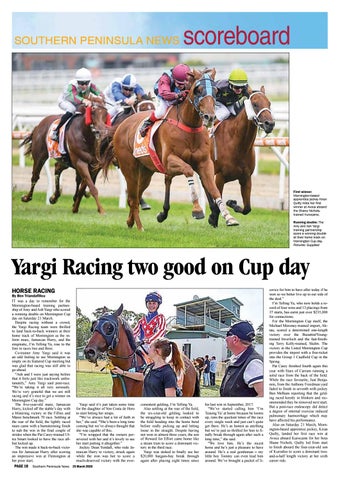 By Ben Triandafillou IT was a day to remember for the Mornington-based training partnership of Amy and Ash Yargi who scored a winning double on Mornington Cup day on Saturday 21 March. Despite racing without a crowd, the Yargi Racing team were thrilled to land back-to-back winners at their home track of Mornington as the inform mare, Jamaican Hurry, and the enigmatic, I’m Telling Ya, rose to the fore in races two and three. Co-trainer Amy Yargi said it was an odd feeling to see Mornington so empty on its featured Cup meeting but was glad that racing was still able to go ahead. “Ash and I were just saying before that it feels just like trackwork unfortunately,” Amy Yargi said post-race. “We’re taking it all very seriously. We’re very grateful that we are still racing and it’s nice to get a winner on Mornington Cup day.” The five-year-old mare, Jamaican Hurry, kicked off the stable’s day with a blistering victory in the Fillies and Mares benchmark 70 race. Settling at the rear of the field, the lightly raced mare came with a barnstorming finish to nab the win in the final couple of strides when the Pat Carey-trained Ultra Smart looked to have the race allbut locked up. The win made it back-to-back victories for Jamaican Hurry after scoring an impressive win at Flemington at her prior start.

Yargi said it’s just taken some time for the daughter of Von Costa de Hero to start hitting her straps. “We’ve always had a lot of faith in her,” she said. “She’s been a long time coming but we’ve always thought that she was capable of this. “I’m wrapped that the owners persevered with her and it’s lovely to see her start putting it altogether.” Jockey Dean Yendall, who rode Jamaican Hurry to victory, struck again while the iron was hot to score a much-deserved victory with the ever25 March 2020

consistent gelding, I’m Telling Ya. Also settling at the rear of the field, the six-year-old gelding looked to be struggling to keep in contact with the field heading into the home bend before really picking up and letting loose in the straight. Despite having not won in almost three years, the son of Reward for Effort came home like a steam train to score a dominant victory in the third race. Yargi was stoked to finally see her $20,000 bargain-buy break through again after placing eight times since

his last win in September, 2017. “We’ve started calling him ‘I’m Teasing Ya’ at home because he looms up, runs the quickest times of the race every single week and just can’t quite get there. He’s as honest as anything but we’re just so thrilled for him to finally break through again after such a long time,” she said. “We love him. He’s the nicest horse and he’s just a pleasure to have around. He’s a real gentleman – my little boy Tommy can even lead him around. We’ve brought a packet of li-

corice for him to have after today if he won so we better live up to our side of the deal.” I’m Telling Ya, who now holds a record of four wins and 13 placings from 37 starts, has earnt just over $235,000 for connections. For the Mornington Cup itself, the Michael Moroney-trained import, Aktau, scored a determined one-length victory over the Busuttin/Youngtrained Inverloch and the fast-finishing Terry Kelly-trained, Skelm. The victory in the Listed Mornington Cup provides the import with a free-ticket into the Group 1 Caulfield Cup in the Spring. Pat Carey finished fourth again this year with Stars of Carrum running a solid race from the back of the field. While the race favourite, Just Benjamin, from the Anthony Freedman yard faded to finish in seventh with jockey Ben Melham reporting that the gelding raced keenly in blinkers and recommended they be removed next start. But a post-race endoscopy did detect a degree of internal exercise induced pulmonary haemorrhage which may have affected his performance. Also on Saturday 21 March, Mornington-based apprentice jockey, Kiran Quilty, landed her first race win at Avoca aboard Kurocaine for her boss Shane Nichols. Quilty led from start to finish aboard the four-year-old son of Kuroshio to score a dominant twoand-a-half length victory at her sixth career ride.