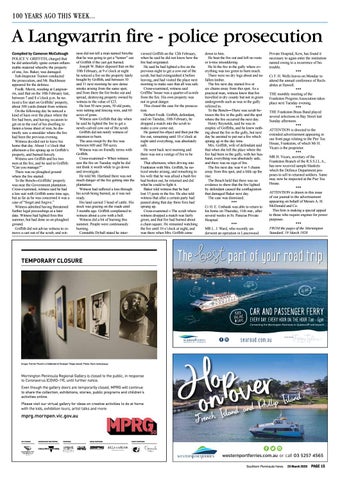 A Langwarrin fire - police prosecution Compiled by Cameron McCullough POLICE V. GRIFFITH, charged that he did unlawfully ignite certain inflammable material whereby the property of one, Jos. Baker, was damaged. Sub-Inspector Trainor conducted the prosecution, and Mr. Backhouse appeared for the defence. Fredk. Merrit, residing at Langwarrin, said that on the 10th February last, between 7 and 8 o’clock p.m. he noticed a fire start on Griffiths’ property, about 300 yards distant from witness. On the following day he noticed a kind of haze over the place where the fire had been, and having occasion to get on to the roof of his dwelling to fasten a loose sheet of iron, he distinctly saw a smoulder where the fire had been the previous evening. Witness decided not to leave his home that day. About 1 o’clock that afternoon a fire sprang up in Griffith’s property, and burned fiercely. Witness saw Griffith and his two men at the fire, and he said to Griffith: “Can you manage?” There was no ploughed ground where the fire started. To the Bench—Griffiths’ property was near the Government plantation. Cross-examined, witness said he had a law suit with Griffith some time ago, but as far as he was concerned it was a case of “forget and forgive.” Witness admitted having threatened further legal proceedings at a later date. Witness had lighted fires this summer, but had done so on ploughed ground. Griffith did not advise witness to remove a cart out of the scrub, and wit-

ness did not tell a man named Smythe that he was going to get a “tenner” out of Griffith if the cart got burned. Joseph W. Baker deposed that on the 10th February, at 9 o’clock at night he noticed a fire on the property lately bought by Griffith, and between 10 and 11 next morning he saw dense smoke arising from the same spot, and from there the fire broke out and spread, destroying property owned by witness to the value of £25. He lost 50 new posts, 50 old posts, wire netting and fencing wire, and 60 acres of grass. Witness saw Griftith that day when he said he lighted the fire to get a newly-calved cow out of the scrub. Griffith did not notify witness of intention to burn. The area swept by the fire was between 600 and 700 acres. Witness was on friendly terms with Griffith. Cross-examined – When witness saw the fire on Tuesday night he did not think it worth while to go down and investigate. He told Mr. Hartland there was not much danger of the fire getting into the plantation. Witness had suffered a loss through his scrub being burned, as it was not ready. His land carried 5 head of cattle. His stock was grazing on the roads until 3 months ago. Griffith complained to witness about a cow with a bell. Witness did a bit of burning this summer. People were continuously burning. Constable Dyball stated he inter-

viewed Griffith on the 12th February, when he said he did not know how the fire had originated. He said he had lighted a fire on the previous night to get a cow out of the scrub, but had extinguished it before leaving, and had visited the place next morning to make sure that all was safe. Cross-examined, witness said Griffths’ house was a quarter-of-a-mile from the fire. His own property was not in great danger. This closed the case for the prosecution. Herbert Fredk. Griffith, defendant, said on Tuesday, 10th February, he dropped a match into the scrub to make a cow come out. He gained his object and then put the fire out, remaining until 10 o’clock at night until everything, was absolutely safe. He went back next morning and there was not a vestige of fire to be seen. That afternoon, when driving into Frankston with Mrs. Griffith, he noticed smoke arising, and remarking to his wife that he was afraid a bush fire had broken out, he returned and did what he could to fight it. Baker told witness that he had lost 15 posts in the fire. He also told witness that after a certain party had passed along that day three fires had sprung up. Cross-examined – The scrub where witness dropped a match was fairly green, and that fire had burned about a chain square. He remained watching the fire until 10 o’clock at night, and was there when Mrs. Griffith came

down to him. He beat the fire out and left no roots or ti-tree smouldering. He lit the fire in the gully where everything was too green to burn much. There were no dry logs about and no fallen timber. The fire next day started five or six chains away from this spot. As a practical man, witness knew that fire travelled in dry county but not in green undergrowth such as was in the gully referred to. To the Bench—There was scrub between the fire in the gully and the spot where the fire occurred the next day. Henry Reynolds, said he was in employ of Griffiths, and he knew nothing about the fire in the gully, but next day he assisted to put out a fire which sprang up in the day time. Mrs. Griffith, wife of defendant said that when she left the place where the fire had been in the gully, with her husband, everything was absolutely safe, and there was no sign of fire. The fire next day was 4 or 5 chains away from this spot, and a little up the rise. The Bench held that there was no evidence to show that the fire lighted by defendant caused the conflagration that damaged Baker next day. The case was dismissed. *** Cr H. E. Unthank was able to return to his home on Thursday, 11th inst., after several weeks in St. Pancras Private Hospital. *** MR L. J. Ward, who recently underwent an operation in Lancewood

Private Hospital, Kew, has found it necessary to again enter the institution named owing to a recurrence of his trouble. *** Cr F. H. Wells leaves on Monday to attend the annual conference of Rechabites at Stawell. *** THE monthly meeting of the Frankston Progress Association takes place next Tuesday evening. *** THE Frankston Brass Band played several selections in Bay Street last Sunday afternoon. *** ATTENTION is directed to the extended advertisement appearing in our front page relating to the Pier Tea House, Frankston, of which Mr H. Vicars is the proprietor. *** MR H. Vicars, secretary of the Frankston Branch of the R.S.S.I.L.A., has now received sample blankets which the Defence Department proposes to sell to returned soldiers. Same may now be inspected at the Pier Tea House. *** ATTENTION is drawn in this issue of our journal to the advertisement appearing on behalf of Messrs A. H. McDonald and Co. This firm is making a special appeal to those who require engines for power purposes. *** FROM the pages of the Mornington Standard, 19 March 1920

Mornington Peninsula Regional Gallery is closed to the public, in response to Coronavirus (COVID-19), until further notice. Even though the gallery doors are temporarily closed, MPRG will continue to share the collection, exhibitions, stories, public programs and children’s activities online. Please visit our virtual gallery for ideas on creative activities to do at home with the kids, exhibition tours, artist talks and more: