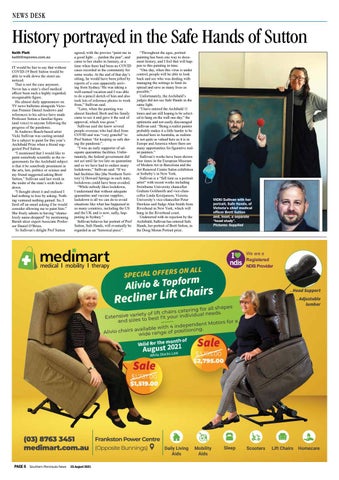 History portrayed in the Safe Hands of Sutton Keith Platt keith@mpnews.com.au IT would be fair to say that without COVID-19 Brett Sutton would be able to walk down the street unnoticed. That is not the case anymore. Never has a state’s chief medical officer been such a highly regarded, recognisable figure. His almost daily appearances on TV news bulletins alongside Victorian Premier Daniel Andrews and references to his advice have made Professor Sutton a familiar figure (and voice) to anyone following the progress of the pandemic. St Andrews Beach-based artist Vicki Sullivan was casting around for a subject to paint for this year’s Archibald Prize when a friend suggested Prof Sutton. “I mentioned that I would like to paint somebody scientific as the requirements for the Archibald subject is that it be somebody prominent in the arts, law, politics or science and my friend suggested asking Brett Sutton,” Sullivan said last week in the midst of the state’s sixth lockdown. “I thought about it and realised I had nothing to lose by asking. Nothing ventured nothing gained. So, I fired off an email asking if he would consider allowing me to paint him.” She freely admits to having “shamelessly name-dropped” by mentioning Buruli ulcer expert Associate Professor Daniel O’Brien. To Sullivan’s delight Prof Sutton

agreed, with the proviso “paint me in a good light … pardon the pun”, and came to her studio in January, at a time when there had been no COVID cases recorded in the community for some weeks. At the end of that day’s sitting, he would have been jolted by reports of a case apparently arriving from Sydney.“He was taking a well-earned vacation and I was able to do a pencil sketch of him and also took lots of reference photos to work from,” Sullivan said. “Later, when the painting was almost finished, Brett and his family came to see it and gave it the seal of approval, which was great.” Sullivan said she knew several people overseas who had died from COVID and was “very grateful” to Prof Sutton “for keeping us safe during the pandemic”. “I was an early supporter of adequate quarantine facilities. Unfortunately, the federal government did not act until far too late on quarantine and so we have had to endure many lockdowns,” Sullivan said. “If we had facilities like [the Northern Territory’s] Howard Springs in each state, lockdowns could have been avoided. “While nobody likes lockdown, I understand that without adequate quarantine and vaccine supplies, lockdown is all we can do to avoid situations like what has happened in so many countries, including the US and the UK and is now, sadly, happening in Sydney.” Sullivan believes her portrait of Prof Sutton, Safe Hands, will eventually be regarded as an “historical piece”.

“Throughout the ages, portrait painting has been one way to document history, and I feel that will happen to this painting in time. “One day, when this virus is under control, people will be able to look back and see who was dealing with managing the settings to limit its spread and save as many lives as possible.” Unfortunately, the Archibald’s judges did not see Safe Hands in the same light. “I have entered the Archibald 11 times and am still hoping to be selected to hang on the wall one day,” the optimistic and not easily discouraged Sullivan said. “Being a realist painter probably makes it a little harder to be selected here in Australia, as realism is not quite as valued here as it is in Europe and America where there are many opportunities for figurative realist painters.” Sullivan’s works have been shown four times in the European Museum of Modern Art in Barcelona and the Art Renewal Centre Salon exhibition at Sotheby’s in New York. Sullivan is a “full time as a portrait artist” with recent works including Swinburne University chancellor Graham Goldsmith and vice-chancellor Linda Kristjanson, Victoria University’s vice-chancellor Peter Dawkins and Judge Alan Smith from Riverhead in New York, which will hang in the Riverhead court. Undeterred with its rejection by the Archibald, Sullivan has entered Safe Hands, her portrait of Brett Sutton, in the Doug Moran Portrait prize.

We are a Registered NDIS Provider