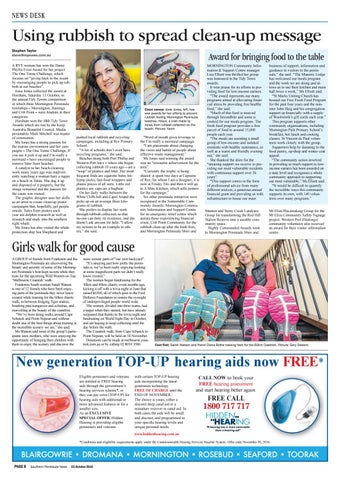 Using rubbish to spread clean-up message Stephen Taylor steve@mpnews.com.au A RYE woman has won the Dame Phyllis Frost Award for her project The One Tonne Challenge, which focuses on â&#x20AC;&#x153;giving back to the ocean by encouraging people to pick up rubbish at our beachesâ&#x20AC;?. Josie Jones collected the award at Horsham, Saturday 15 October, in the annual Tidy Towns competition in which three Mornington Peninsula townships â&#x20AC;&#x201C; Mornington, Hastings and Crib Point â&#x20AC;&#x201C; were finalists in their categories. Horsham won the 48th Tidy Town Awards which are run by the Keep Australia Beautiful Council. Media personality Mark Mitchell was master of ceremonies. Ms Jones has a strong passion for the marine environment and her campaigns â&#x20AC;&#x201C; The One Tonne Challenge, If you see it pick it up and Iâ&#x20AC;&#x2122;m really a mermaid â&#x20AC;&#x201C; have encouraged people to remove litter from beaches. A catalyst to her beach-cleaning work many years ago was inadvertently watching a woman bury a nappy on a beach in Tahiti. She dug it up and disposed of it properly, but the image remained and the passion for the cause was roused. The graphic designer uses her skills as an artist to create clean-up poster campaigns that, hopefully, get people onside. Sales from posters each year aid dolphin research as well as research and study into the southern right whale. Ms Jones has also visited the whale protection ship Sea Shepherd and

Award for bringing food to the table

Clean sweep: Josie Jones, left, has won awards for her efforts to prevent rubbish fouling Mornington Peninsula beaches. Above, a crab made by Jones from rubbish collected on the beach. Picture: Yanni

pushed local rubbish and recycling campaigns, including at Rye Primary School. â&#x20AC;&#x153;A lot of schools donâ&#x20AC;&#x2122;t even have recycling programs,â&#x20AC;? she said. Beaches along both Port Phillip and Western Port bays â&#x20AC;&#x201C; where she began collecting rubbish 10 years ago â&#x20AC;&#x201C; are a â&#x20AC;&#x153;soupâ&#x20AC;? of plastics and litter. Her most frequent finds are cigarette butts, lollypop sticks, fast-food wrappers and plastic pieces of all sorts. Little red plastics soy caps are a bugbear. On her daily walks between the White Cliffs hill and Capel Sound she picks up on an average three kilograms of rubbish. She prefers to display her work through rubbish collection so that no-one can deny its existence, and she doesnâ&#x20AC;&#x2122;t ask anyone for help. â&#x20AC;&#x153;I allow my actions to be an example to others,â&#x20AC;? she said.

â&#x20AC;&#x153;Word of mouth gives leverage to the Iâ&#x20AC;&#x2122;m really a mermaid campaign. â&#x20AC;&#x153;I am passionate about changing the views and habits of people about effective waste management.â&#x20AC;? Ms Jones said winning the award was an â&#x20AC;&#x153;awesome achievement for the areaâ&#x20AC;?. â&#x20AC;&#x153;Currently the trophy is being shared: it spent two days at Captains of Rye, for whom I am a designer; it is now at Freaky Tiki and then it will go to A Mini Kitchen, which sells posters for the campaign.â&#x20AC;? Six other peninsula initiatives were recognised in the Sustainable Community Awards: Mornington Community Information and Support Centre for its emergency relief centre which assists those experiencing financial crisis; Crib Point Community for the rubbish clean up after the bush fires, and Mornington Peninsula Shire and

MORNINGTON Community Information & Support Centre manager Lisa Elliott was thrilled her group was honoured in the Tidy Town awards. It won praise for its efforts in providing food for low-income earners. â&#x20AC;&#x153;The award represents our many programs aimed at alleviating financial stress by providing free healthy food,â&#x20AC;? she said. â&#x20AC;&#x153;Much of this food is sourced through Secondbite and some is cooked for our meals program. The fresh food program provides a free parcel of food to around 15,000 people each year. â&#x20AC;&#x153;The meals are assisting a small group of low-income and isolated residents with healthy sustenance, as well as a warm and friendly evening out,â&#x20AC;? she said. She thanked the shire for the â&#x20AC;&#x153;amazing support we receive in providing our most vulnerable residents with continuous support over 36 yearsâ&#x20AC;?. â&#x20AC;&#x153;This support comes in the form of professional advice from many different sources, a generous annual financial grant and providing us with infrastructure to house our main Manton and Stony Creek Landcare Group for transforming the Red Hill Station Reserve into a useable community space. Highly Commended Awards went to Mornington Peninsula Shire and

business of support, information and guidance to visitors to the peninsula,â&#x20AC;? she said. â&#x20AC;&#x153;The Masonic Lodge has welcomed our meals program and the work we are doing and allows us to use their kitchen and main hall twice a week,â&#x20AC;? Ms Elliott said. â&#x20AC;&#x153;St Marks Uniting Church has housed our Free Fresh Food Program for the past four years and the minister John Haig and his congregation support us financially with a supply of Woolworthâ&#x20AC;&#x2122;s gift cards each year.â&#x20AC;? This program supports other community organisations, including Mornington Park Primary Schoolâ&#x20AC;&#x2122;s breakfast, hot lunch and cooking classes. St Vincent de Paul volunteers work closely with the group. Supporters help by donating to the food pantry, op-shop and winter coat appeal. â&#x20AC;&#x153;The community action involved in providing so much support to lowincome earners has been awarded on a state level and recognises a whole community approach to supporting our most vulnerable,â&#x20AC;? Ms Elliott said. â&#x20AC;&#x153;It would be difficult to quantify the incredible ways this community supports its own, with 140 volunteers over many programs.â&#x20AC;? Mt Eliza Placemaking Group for the Mt Eliza Community Safety Signage project. Western Port (Hastings) community volunteers also received an award for their visitor information centre.

Girls walk for good cause A GROUP of friends from Frankston and the Mornington Peninsula are discovering the beauty and serenity of some of the Mornington Peninsulaâ&#x20AC;&#x2122;s best-kept secrets while they train for the upcoming Wild Women on Top â&#x20AC;&#x2DC;Melbourne Coastrekâ&#x20AC;&#x2122; walk. Frankston South woman Sarah Watson is one of 12 friends who have been enjoying parts of the peninsula they never knew existed while training for the 60km charity walk, in between dodging Tiger snakes, brushing past kangaroos and echidnas, and marvelling at the beauty of the coastline. â&#x20AC;&#x153;Weâ&#x20AC;&#x2122;ve been doing walks around Cape Schanck and Point Nepean and without doubt one of the best things about training is the incredible scenery we see,â&#x20AC;? she said. Ms Watson said most of the groupâ&#x20AC;&#x2122;s participants were mothers, who were enjoying the opportunity of bringing their children with them to enjoy the scenery and discover the

more remote parts of â&#x20AC;&#x153;our own backyardâ&#x20AC;?. â&#x20AC;&#x153;Itâ&#x20AC;&#x2122;s amazing just how pretty the peninsula is, weâ&#x20AC;&#x2122;ve been really enjoying looking at some magnificent parts we didnâ&#x20AC;&#x2122;t really know existed.â&#x20AC;? The women began fundraising for the 30km and 60km charity event months ago, kicking it off with a trivia night in June that raised $6500, all of which goes to the Fred Hollows Foundation to restore the eyesight of underprivileged people world wide. The women, divided into three teams, had a target when they started, but have already surpassed that thanks to the trivia night and fundraising on World Sight Day in October, and are hoping to keep collecting until the day before the walk. The Coastrek walk, from Cape Schanck to Point Nepean, will be held on 18 November. Donations can be made at melbourne.coastrek.com.au or by calling 02 8039 3580.

with certain TOP-UP hearing aids incorporating the latest generation technology FREE OF CHARGE until the END OF NOVEMBER. The choice is yours, either a discreet deep canal aid or a miniature receiver in canal aid. In both cases the aids will be small and discreet, and programmed to \RXUVSHFLÂżFKHDULQJOHYHOVDQG unique personal needs. www.hiddenhearing.com.au