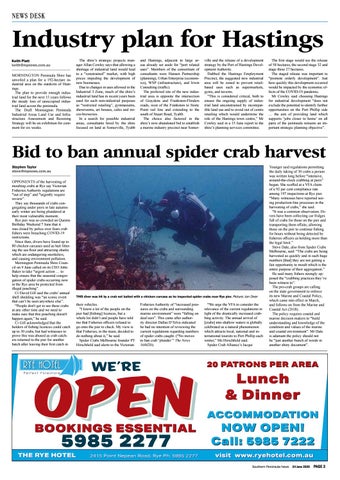 Industry plan for Hastings Keith Platt keith@mpnews.com.au MORNINGTON Peninsula Shire has unveiled a plan for a 192-hectare industrial area on the outskirts of Hastings. The plan to provide enough industrial land for the next 15 years follows the steady loss of unoccupied industrial land across the peninsula. The Draft Mornington Peninsula Industrial Areas Land Use and Infrastructure Assessment and Rezoning Strategy will be on exhibition for comment for six weeks.

The shire’s strategic projects manager Allan Cowley says that allowing a shortage of industrial land would lead to a “constrained” market, with high prices impeding the development of new businesses. Due to changes in uses allowed in the Industrial 3 Zone, much of the shire’s industrial land has in recent years been used for such non-industrial purposes as “restricted retailing”, gymnasiums, showrooms, art houses, cafes and micro-breweries. In a search for possible industrial areas, consultants hired by the shire focused on land at Somerville, Tyabb

and Hastings, adjacent to large areas already set aside for “port related uses”. Members of the consortium of consultants were Hansen Partnership (planning), Urban Enterprise (economics), WSP (infrastructure), and Irwin Consulting (traffic). The preferred site of the new industrial area is opposite the intersection of Graydens and Frankston-Flinders roads, west of the Frankston to Stony Point rail line and extending to the south of Stuart Road, Tyabb. The choice also factored in the shire’s now abandoned bid to establish a marine industry precinct near Somer-

ville and the release of a development strategy by the Port of Hastings Development Authority. Dubbed the Hastings Employment Precinct, the suggested new industrial area will be zoned to prevent retailbased uses such as supermarkets, gyms, and taverns. “This is considered critical, both to ensure the ongoing supply of industrial land unconstrained by incompatible land use and to avoid out of centre retailing which would undermine the role of the Hastings town centre,” Mr Cowley said in a 15 June report to the shire’s planning services committee.

The first stage would see the release of 58 hectares, the second stage 32 and stage three 27 hectares. The staged release was important to “promote orderly development”. Just how quickly this development occurred would be impacted by the economic effects of the COVID-19 pandemic. Mr Cowley said choosing Hastings for industrial development “does not exclude the potential to identify further opportunities on the Port Phillip side … the aim of providing land which supports ‘jobs closer to home’ on all parts of the peninsula remains an important strategic planning objective”.

Bid to ban annual spider crab harvest Stephen Taylor steve@mpnews.com.au OPPONENTS of the harvesting of moulting crabs at Rye say Victorian Fisheries Authority regulations are “out of step” and “urgently require review”. They say thousands of crabs congregating under piers in late autumnearly winter are being plundered at their most vulnerable moment. Rye pier was so crowded on Queens Birthday Weekend 7 June that it was closed by police over fears crab fishers were breaching COVID-19 restrictions. Since then, divers have found up to 80 chicken carcases used as bait littering the sea floor and attracting sharks which are endangering snorkelers, and causing environment pollution. Mornington Peninsula Shire Council on 9 June called on its CEO John Baker to take “urgent action … to help ensure that the seasonal congregation of spider crabs occurring now in the Rye area be protected from illegal poaching”. Cr David Gill said the crabs’ annual shell shedding was “an iconic event that can’t be seen anywhere else”. “People don&#39;t get to see these crabs at any other time and we need to make sure that this poaching doesn&#39;t happen again,” he said. Cr Gill acknowledged that the holders of fishing licences could catch up to 30 crabs, but had witnesses to prove this was abused as crab catchers returned to the pier for another batch after leaving their first catch in

THIS diver was hit by a crab net baited with a chicken carcass as he inspected spider crabs near Rye pier. Picture: Jon Diver

their vehicles. “I know a lot of the people on the pier had [fishing] licences, but a whole lot didn’t and people have told me that Fisheries officers refused to go onto the pier to check. My view is that Fisheries, in the main, decided to do nothing about it,” he said. Spider Crabs Melbourne founder PT Hirschfield said alerts to the Victorian

Fisheries Authority of “increased pressures on the crabs and surrounding marine environment” were “falling on deaf ears”. This came after authority director Dallas D’Silva indicated he had no intention of reviewing the current regulations regarding numbers of spider crabs caught. (“No moves to ban crab ‘plunder’” The News 16/6/20).

“We urge the VFA to consider the relevance of the current regulations in light of the drastically increased crabbing activity. The annual arrival of [crabs] into shallow waters is globally celebrated as a natural phenomenon which attracts local, national and international tourists to Port Phillip each winter,” Ms Hirschfield said. Spider Crab Alliance’s Jacqui

Younger said regulations permitting the daily taking of 30 crabs a person was written long before “intensive, around-the-clock crabbing at piers” began. She scoffed at a VFA claim of a 92 per cent compliance rate among 197 inspections at Rye pier. “Many witnesses have reported seeing production-line processes in the harvesting of crabs,” she said. “It was a common observation. Divers have been collecting car fridges full of crabs for those on the pier and transporting them offsite, allowing those on the pier to continue fishing for hours without being detected by fisheries officers as holding more than the legal limit.” Steve Dale, also from Spider Crabs Melbourne, said: “The crabs are being harvested so quickly and in such huge numbers [that] they are not getting a fair opportunity to moult which is the entire purpose of their aggregation.” He said many fishers strongly opposed the “crabbing practices they’ve been witness to”. The pro-crab groups are calling on the state government to enforce its new Marine and Coastal Policy, which came into effect in March, and follows on from the Marine and Coastal Act (2018). The policy requires coastal and marine decision makers to “build understanding and knowledge of the condition and values of the marine and coastal environment”. Mr Dale is adamant the policy should not be “just another bunch of words in another shiny document”.