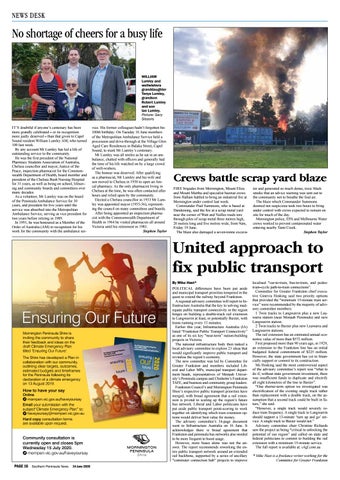 No shortage of cheers for a busy life

WILLIAM Lumley and wellwishers granddaughter Tanya Lumley, grandson Robert Lumley and son Ian Lumley. Picture: Gary Sissons IT’S doubtful if anyone’s centenary has been more grandly celebrated – or its recognition more justly deserved – than that given to Capel Sound resident William Lumley AM, who turned 100 last week. By any account Mr Lumley has led a life of outstanding service to the community. He was the first president of the National Pharmacy Students Association of Australia, Chelsea councillor and mayor, Justice of the Peace, inspection pharmacist for the Commonwealth Department of Health, board member and president of the Chelsea Bush Nursing Hospital for 31 years, as well as being on school, lifesaving and community boards and committees over many decades. As a volunteer, Mr Lumley was on the board of the Peninsula Ambulance Service for 30 years, and president for five years until the service was absorbed into the Metropolitan Ambulance Service, serving as vice president for two years before retiring in 1989. In 1991, he was honoured as a Member of the Order of Australia (AM) in recognition for his work for the community with the ambulance ser-

vice. His former colleagues hadn’t forgotten his 100th birthday: On Tuesday 16 June members of the Metropolitan Ambulance Service held a procession and drive-through at the Village Glen Aged Care Residences in Balaka Street, Capel Sound, to mark Mr Lumley’s centenary. Mr Lumley was all smiles as he sat in an ambulance, chatted with officers and generally had the time of his life watched on by a large crowd of well-wishers. The honour was deserved: After qualifying as a pharmacist, Mr Lumley and his wife and son moved to Chelsea in 1950 to open an Amcal pharmacy. As the only pharmacist living in Chelsea at the time, he was often contacted after hours and relied upon by the community. Elected a Chelsea councillor in 1953 Mr Lumley was appointed mayor (1955-56), representing the council on many committees and boards. After being appointed an inspection pharmacist with the Commonwealth Department of Health in 1964 he visited pharmacies all around Victoria until his retirement in 1983. Stephen Taylor

Crews battle scrap yard blaze FIRE brigades from Mornington, Mount Eliza and Mount Martha and specialist hazmat crews from Hallam battled to bring an industrial fire at Mornington under control last week. Commander Paul Summons, who is based at Dandenong, said the fire at a scrap metal yard near the corner of Watt and Yuilles roads tore through piles of scrap metal three metres high, 20 metres long and five metres wide, from 9am, Friday 19 June. The blaze also damaged a seven-tonne excava-

tor and generated so much dense, toxic black smoke that an advice warning was sent out to the community not to breathe the foul air. The blaze which Commander Summons deemed not suspicious took two hours to bring under control with crews expected to remain on site for much of the day. Mornington police, EPA and Melbourne Water crews worked to prevent contaminated water entering nearby Tanti Creek. Stephen Taylor

United approach to fix public transport Ensuring Our Future Mornington Peninsula Shire is inviting the community to share their feedback and ideas on the draft Climate Emergency Plan titled ‘Ensuring Our Future’.

How to have your say

The Shire has developed a Plan in collaboration with our community, outlining clear targets, outcomes, estimated budgets and timeframes for the Peninsula following its declaration of a climate emergency on 13 August 2019.

By Mike Hast* POLITICAL differences have been put aside and municipal transport priorities tempered in the quest to extend the railway beyond Frankston. A regional advisory committee will report to Infrastructure Australia that the key to solving inadequate public transport connectivity in the region hinges on building a double-track rail extension to Langwarrin at least, or potentially Baxter, with trains running every 15 minutes. Earlier this year, Infrastructure Australia (IA) listed “Frankston Public Transport Connectivity” as one of its six key “near-term” nation-building projects in Victoria. The national infrastructure body then tasked a local advisory committee to explore 23 ideas that would significantly improve public transport and revitalise the region’s economy. The new committee was led by Committee for Greater Frankston and members included Liberal and Labor MPs, municipal transport department heads, representatives of Monash University’s Peninsula campus and Chisholm’s Frankston TAFE, and business and community group leaders. Frankston Council’s and Mornington Peninsula Shire’s respective public transport priorities have merged, with broad agreement that a rail extension is pivotal to scaling up the region’s future bus network. Liberal and Labor politicians have put aside public transport point-scoring to work together on identifying which train extension options would deliver best value for money. The advisory committee’s 54-page document went to Infrastructure Australia on 16 June. It acknowledges there is broad agreement that Frankston and peninsula bus networks also needed to be more frequent to boost usage. However, more buses alone was not the answer. The report recommends reworking the entire public transport network around an extended rail backbone, supported by a series of ancillary “commuter connection hub” projects to improve

localised “car-to-train, bus-to-train, and pedestrian–cycle path-to-train connections”. Committee for Greater Frankston chief executive Ginevra Hosking said two priority options that provided the “minimum 15-minute train service” were recommended by the majority of advisory committee members: 1 Twin tracks to Langwarrin plus a new Leawarra station (near Monash Peninsula) and new Langwarrin station. 2 Twin tracks to Baxter plus new Leawarra and Langwarrin stations. The rail extension has an estimated annual economic value of more than $572 million. First proposed more than 90 years ago, in 1929, an extension to the Frankston line has an initial budgeted federal commitment of $225 million. However, the state government has yet to financially support or commit to its construction. Ms Hosking said the most controversial aspect of the advisory committee’s report was “what to do if, without state government investment, there was insufficient funds to duplicate and electrify all eight kilometres of the line to Baxter”. “One shorter-term option we investigated was electrification of the existing single track rather than replacement with a double track, on the assumption that a second track could be built in future,” she said. “However, a single track would severely reduce train frequency. A single track to Langwarrin should support a 15-minute ‘turn up and go’ service. A single track to Baxter would not.” Advisory committee chair Christine Richards saw the project as being “critical to unlocking the potential of our region” and called on state and federal politicians to commit to building the rail extension with a minimum 15-minute service. The full report is available at: c4gf.com.au * Mike Hast is a freelance writer working for the Committee for Greater Frankston