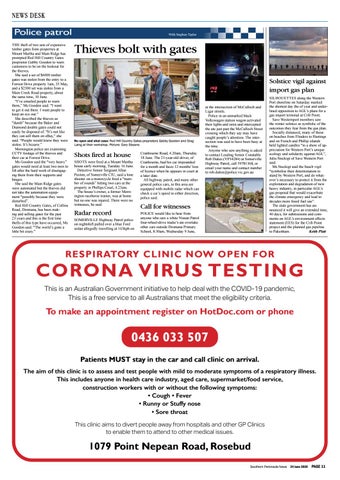 Police patrol THE theft of two sets of expensive timber gates from properties at Mount Martha and Main Ridge has prompted Red Hill Country Gates proprietor Gabby Goodon to warn customers to be on the lookout for the thieves. She said a set of $6000 timber gates was stolen from the entry to a Forrest Drive property 1am, 25 May, and a $2500 set was stolen from a Main Creek Road property, about the same time, 10 June. “I’ve emailed people to warn them,” Ms Goodon said. “I want to get it out there. I want people to keep an eye out.” She described the thieves as “dumb” because the Baker and Diamond double gates could not easily be disposed of. “It’s not like they can sell them on eBay,” she said. “People would know they were stolen. It’s bizarre.” Mornington police are examining CCTV footage of the thieves and their car at Forrest Drive. Ms Goodon said the “very heavy” gates would need at least two men to lift after the hard work of disengaging them from their supports and hinges. She said the Main Ridge gates were automated but the thieves did not take the automation equipment “possibly because they were disturbed”. Red Hill Country Gates, of Collins Road, Dromana, has been making and selling gates for the past 23 years and this is the first time thefts of this type have occurred, Ms Goodon said. “The world’s gone a little bit crazy.”

Shots fired at house SHOTS were fired at a Mount Martha house early morning, Tuesday 16 June. Detective Senior Sergeant Allan Paxton, of Somerville CIU, said a lone shooter on a motorcycle fired a “number of rounds” hitting two cars at the property in Phillips Court, 4.25am. The house’s owner, a former Mornington racehorse trainer, was at home but no one was injured. There were no witnesses, he said.

Cranbourne Road, 4.20am, Thursday 18 June. The 21-year-old driver, of Cranbourne, had his car impounded for a month and faces 12 months’ loss of licence when he appears in court at a later date. All highway patrol, and many other general police cars, in this area are equipped with mobile radar which can check a car’s speed in either direction, police said.

at the intersection of McCulloch and Ligar streets. Police in an unmarked black Volkswagen station wagon activated their lights and siren and intercepted the ute just past the McCulloch Street crossing which they say may have caught people’s attention. The intersection was said to have been busy at the time. Anyone who saw anything is asked to contact Leading Senior Constable Rob Dukes (VP34284) at Somerville Highway Patrol, call 59781368, or email your name and contact number to rob.dukes@police.vic.gov.au

Call for witnesses POLICE would like to hear from anyone who saw a white Nissan Patrol four-wheel-drive tradie’s ute overtake other cars outside Dromana Primary School, 8.50am, Wednesday 9 June,

SILHOUETTES along the Western Port shoreline on Saturday marked the shortest day the of year and underlined opposition to AGL’s plans for a gas import terminal at Crib Point. Save Westernport members saw the winter solstice as symbolic of the outcomes they fear from the gas plan. Socially distanced, many of those on beaches from Flinders to Hastings and on French and Phillip islands held lighted candles “in a show of appreciation for Western Port’s unique ecology and solidarity against AGL”, Julia Stockigt of Save Western Port said. Ms Stockigt said the beach vigil “symbolise their determination to stand by Western Port, and do whatever’s necessary to protect it from the exploitation and degradation of new heavy industry, in particular AGL’s gas proposal that would exacerbate the climate emergency and lead to decades more fossil fuel use”. The state government has announced it will give an extended time, 40 days, for submissions and comments on AGL’s environment effects statement (EES) for the Crib Point project and the planned gas pipeline to Pakenham. Keith Platt