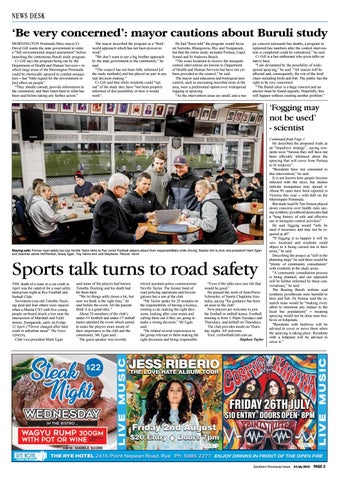 ‘Be very concerned’: mayor cautions about Buruli study MORNINGTON Peninsula Shire mayor Cr David Gill wants the state government to order a “full environmental impact assessment” before launching the contentious Buruli study program. Cr Gill says the program being run by the Department of Health and Human Services – in which large areas of the Mornington Peninsula could be chemically sprayed to combat mosquitoes – has “little regard for the environment or [its] effect on people”. “They should consult, provide information to the community and then listen hard to what has been said before taking any further action.”

The mayor described the program as a “third world approach which has not been proven to work”. “We don’t want to see a big brother approach by the state government to the community,” he said. “The council has not been fully informed [of the study methods] and has played no part in any real decision making.” Cr Gill said that while residents could “opt out” of the study they have “not been properly informed of this possibility or how it would work”.

He had “been told” the program would focus on Sorrento, Blairgowrie, Rye and Tootgarook, but that the entire study included Portsea, Capel Sound and St Andrews Beach. “The exact locations to receive the mosquito control intervention are known to Department of Health and Human Services but have not yet been provided to the council,” he said. The mayor said education and biological pest control, such as increasing microbat nests in the area, were a preferential option over widespread fogging or spraying. “As the intervention areas are small, and a ma-

jor concern surrounds bee deaths, a program to replenish bee numbers after the control intervention is completed could be considered,” he said. Cr Gill is a bee enthusiast who gives talks on native bees. “l am devastated by the possibility of widespread spraying,” he said. “All insects will be affected and, consequently, the rest of the food chain including birds and fish. The public has the right to be very concerned. “The Buruli ulcer is a huge concern and an answer must be found urgently. Hopefully, this will happen without creating another problem.”

‘Fogging may not be used’ - scientist

Sports talk turns to road safety said some of the players had known Timothy Hocking and his death had hit them hard. “We let things settle down a bit, but now we think is the right time,” he said before the event. All the parents think it is a good idea.” About 20 members of the club’s under-19 football and under-17 netball teams attended the event which aimed to make the players more aware of their importance to the club and the community, Mr Egan said. The guest speaker was recently

retired assistant police commissioner Neville Taylor. The former head of road policing operations and Investigations has a son at the club. “Mr Taylor spoke for 20 minutes on the responsibility of having a licence, owning a car, making the right decisions, looking after your mates and calling them out if they are going to make a wrong decision,” Mr Egan said. “He related several experiences to the group relevant to them making the right decisions and being responsible.

“Even if the talks save one life that would be good.” He praised the work of Jean-Pierre Schroeder, of Sports Chaplains Australia, saying “his guidance has been an asset to the club”. New players are welcome to join the football or netball teams. Football training is from 5.30pm Tuesdays and Thursdays, and netball on Thursdays. The club provides meals on Thursday nights. All welcome. Visit: ryefootballclub.com.au Stephen Taylor

THE death of a mate in a car crash in April was the catalyst for a road safety instruction night at Rye Football and Netball Club. Seventeen-year-old Timothy Hocking died and four others were injured when a Mazda CX3 with five young people on board struck a tree near the intersection of Marshall and Field streets, Tootgarook, early on Friday 12 April. (“Driver charged after fatal crash in suburban street” The News 15/4/19). Club vice-president Mark Egan

Continued from Page 1 He described the proposed trials as an “impulsive strategy”, saying residents were “furious they still have not been officially informed about the spraying that will cover from Portsea to St Andrews”. “Residents have not consented to this intervention,” he said. It is not known how people become infected with the ulcer, but studies indicate mosquitoes may spread it. About 90 cases have been reported in Victoria this year – with half on the Mornington Peninsula. But study lead Dr Tim Stinear played down concerns over health risks saying synthetic pyrethroid pesticides had a “long history of safe and effective use in mosquito control activities”. He said fogging would “only be used if necessary and may not be required at all”. “If fogging is to happen it will be very localised and residents could object to it being carried out in their areas,” he said. Describing the project as “still in the planning stage” he said there would be “plenty of community consultation” with residents in the study areas. “A community consultation process is being planned, and our approach will be further informed by these conversations,” he said. The Beating Buruli website said synthetic pyrethroids were harmful to bees and fish. Dr Stinear said the research team would be “making every effort to minimise any impact to the local bee populations” – meaning spraying would not be done near beehives or fishponds. “Residents with beehives will be advised to cover or move them when the spraying is taking place. Residents with a fishpond will be advised to cover it.”