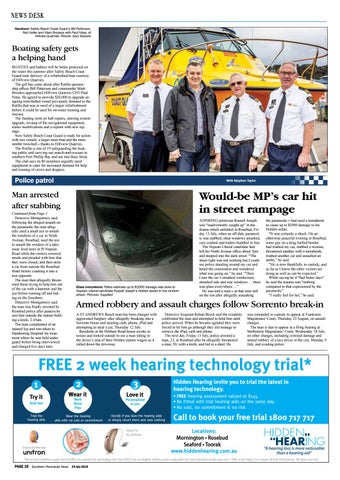 Boating safety gets a helping hand BOATIES and bathers will be better protected on the water this summer after Safety Beach Coast Guard took delivery of a refurbished boat courtesy of Hillview Quarries. The gift has come about after flotilla sponsorship officer Bill Patterson and commander Mark Brookes approached Hillview Quarries CEO Paul Nitas. He agreed to provide $20,000 to upgrade an ageing twin-hulled vessel previously donated to the flotilla that was in need of a major refurbishment before it could be used for on-water training and rescues. The funding went on hull repairs, steering system upgrade, revamp of the navigational equipment, trailer modifications and a repaint with new signage. Now Safety Beach Coast Guard is ready for action with two vessels: a larger main boat and the more nimble twin-hull – thanks to Hillview Quarries. The flotilla is one of 19 safeguarding the boating public and carrying out search-and-rescues in southern Port Phillip Bay and out into Bass Strait. The club says its 80 members urgently need equipment to cater for increased demand for help and training of crews and skippers.

Man arrested after stabbing Continued from Page 1 Detective Montgomery said following the alleged assault on the paramedic the man allegedly used a small axe to smash the windows of a car in Ninth Avenue, Rosebud; used the axe to smash the window of a takeaway food store in Pt Nepean Road while the owners cowered inside and pleaded with him that they were closed; and then stole a car from outside the Rosebud Hotel before crashing it into a tree opposite. The man then allegedly threatened those trying to help him out of the car with a hammer and the axe before running off and hiding on the foreshore. Detective Montgomery said the man was finally arrested by Rosebud police after passers-by saw him outside the station holding a knife, 2.45am. The man complained of an injured leg and was taken to Dandenong Hospital for treatment where he was held under guard before being interviewed and charged five days later.

ASPIRING politician Russell Joseph was “inadvertently caught up” in the drama which unfolded in Rosebud, Friday 13 July, when an off-duty paramedic was stabbed, shop windows smashed, cars crashed and traders huddled in fear. The Nepean Liberal candidate had left his Ninth Avenue office about 7pm and stepped into the dark street. “The street light was not working but I could see police standing around my car and heard the commotion and wondered what was going on,” he said. “Then I saw the car’s smashed windscreen, smashed side and rear windows … there was glass everywhere …” He was told a man – at that time still on the run after allegedly assaulting

the paramedic – had used a tomahawk to cause up to $2000 damage to his Holden sedan. “It was certainly a shock. On an otherwise peaceful evening in Rosebud, some guy on a drug fuelled bender had trashed my car, stabbed a woman, threatened another with a tomahawk, trashed another car and assaulted an ambo,” he said. “He is now thankfully in custody, and as far as I know the other victims are doing as well as can be expected.” While saying he’d “had better days” he said the trauma was “nothing compared to that experienced by the paramedic”. “I really feel for her,” he said.

Armed robbery and assault charges follow Sorrento break-in A ST ANDREWS Beach man has been charged with aggravated burglary after allegedly breaking into a Sorrento house and stealing cash, phone, iPad and attempting to steal a car, Thursday 12 July. Residents at the Hotham Road house awoke to noises and looked outside to see a man sitting in the driver’s seat of their Holden station wagon as it rolled down the driveway.

Detective Sergeant Rohan Brock said the residents confronted the man and attempted to hold him until police arrived. When he became agitated they were forced to let him go although they did manage to retrieve the iPad, cash and phone. The next day, Friday 13 July, police arrested a man, 23, in Rosebud after he allegedly threatened a man, 50, with a knife, and hid in a shed. He

Wear the hearing aids with no cost or commitment

Hidden Hearing invite you to trial the latest in hearing technology. • FREE hearing assessment valued at $145 • Be fi tted with trial hearing aids on the same day • No cost, no commitment &amp; no risk

*Terms and Conditions apply. Moxi Fit (RIC) are used for the technology trial. Your (ITE) if you are eligible, will be custom made after the trial. Individual results may vary. ^ Offer ends Friday, 31st August 2018 © 2018 Unitron. All rights reserved