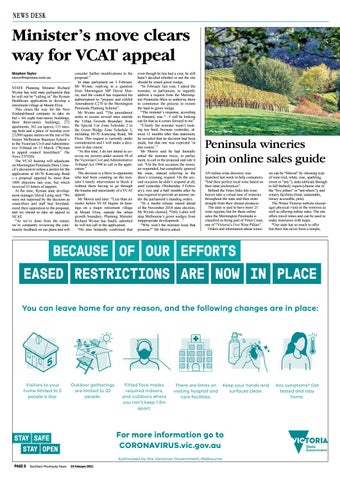 Minister’s move clears way for VCAT appeal Stephen Taylor steve@mpnews.com.au STATE Planning Minister Richard Wynne has told state parliament that he will not be “calling in” the Ryman Healthcare application to develop a retirement village at Mount Eliza. This clears the way for the New Zealand-based company to take its bid – for eight four-storey buildings, three three-storey buildings, 272 apartments, 362 car spaces, 115 nursing beds and a place of worship over 23,000 square metres on the site of the former Melbourne Business School – to the Victorian Civil and Administrative Tribunal on 15 March. (“Ryman to appeal council knockback” The News 27/7/20). The VCAT hearing will adjudicate on Mornington Peninsula Shire Council’s decision to refuse a permit for the application at 60-70 Kunyung Road – a proposal opposed by more than 1000 objectors last year, but which received 33 letters of support. At the time, Ryman state development manager David Laing said: “We were not surprised by the decision as councillors and staff had foreshadowed their opposition to the proposal, and we intend to take an appeal to VCAT. “As we’ve done from the outset, we’re constantly reviewing the community feedback on our plans and will

consider further modifications to the proposal.” In state parliament on 3 February Mr Wynne, replying to a question from Mornington MP David Morris, said the council has requested his authorisation to “prepare and exhibit Amendment C270 to the Mornington Peninsula Planning Scheme”. Mr Wynne said: “The amendment seeks to rezone several sites outside the Urban Growth Boundary from the Special Use Zone Schedule 2 to the Green Wedge Zone Schedule 3, including 60-70 Kunyung Road, Mt Eliza. This request is currently under consideration and I will make a decision in due course. “At this time, I do not intend to exercise my powers under section 58 of the Victorian Civil and Administrative Tribunal Act 1998 to call in the application.” The decision is a blow to opponents who had been counting on the minister’s timely intervention to block it without them having to go through the trauma and uncertainty of a VCAT appeal. Mr Morris said later: “Less than six weeks before VCAT begins its hearings on a major retirement village at Mount Eliza, outside the urban growth boundary, Planning Minister Richard Wynne has finally admitted he will not call in the application. “He also belatedly confirmed that

even though he has had a year, he still hasn’t decided whether or not the site should be zoned green wedge. “In February last year, I asked the minister, in parliament, to urgently address a request from the Mornington Peninsula Shire to authorise them to commence the process to rezone the land to green wedge. “The minister’s response, according to Hansard, was “…I will be looking out for that as it comes forward to me”. “Clearly the minister wasn’t looking too hard, because yesterday, almost 12 months after that statement, he revealed that no decision had been made, but that one was expected ‘in due course’.” Mr Morris said he had formally asked the minister twice, in parliament, to call in the proposal and rule it out. “On the first occasion the minister responded, but completely ignored the issue, instead referring to the shire’s rezoning request. On the second occasion he didn’t respond at all, until yesterday (Wednesday 3 February), two and a half months after he was required to provide an answer under the parliament’s standing orders. “In a media release issued ahead of the November 2018 state election, Mr Wynne claimed, “Only Labor will stop Melbourne’s green wedges from inappropriate development…” “Why won’t the minister keep that promise?” Mr Morris asked.

Peninsula wineries join online sales guide AN online wine directory was launched last week to help consumers “find their perfect local wine based on their taste preferences”. Behind the Vines links lets wine buyers take a virtual tour of wineries throughout the state and then order straight from their chosen producer. The state is said to have more 21 wine regions, but for these online sales the Mornington Peninsula is classified as being part of Pinot Coast, one of “Victoria’s Five Wine Pillars”. Orders and information about winer-

ies can be “filtered” by choosing type of wine (red, white, rose, sparkling, sweet or “any”); taste (delicate through to full bodied); region (choose one of the “five pillars” or “anywhere”); and winery facilities (food, sustainable, luxury accessible, pets). The Wines Victoria website encourages physical visits to the wineries as well as offering online sales. The site offers travel times and can be used to make itineraries with maps. “Our state has so much to offer but there has never been a simple,

BECAUSE OF OUR EFFORTS EASED RESTRICTIONS ARE NOW IN PLACE You can leave home for any reason, and the following changes are in place:

Visitors to your home limited to 5 people a day.

Outdoor gatherings are limited to 20 people.

There are limits on visiting hospital and care facilities.

Keep your hands and surfaces clean.

For more information go to CORONAVIRUS.vic.gov.au Authorised by the Victorian Government, Melbourne

Any symptoms? Get tested and stay home.