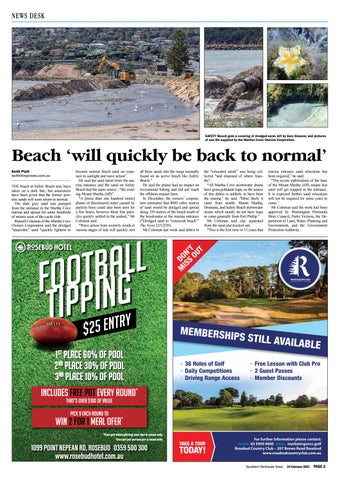 SAFETY Beach gets a covering of dredged sand, left by Gary Sissons; and pictures of sea life supplied by the Martha Cover Owners Corporation.

Beach ‘will quickly be back to normal’ Keith Platt keith@mpnews.com.au THE beach at Safety Beach may have taken on a dark hue, but assurances have been given that the former pristine sands will soon return to normal. The dark grey sand was pumped from the entrance to the Martha Cove marina and spread for some hundreds of metres west of the yacht club. Russell Coleman of the Martha Cove Owners Corporation said the dredged “anaerobic” sand “quickly lightens to

become normal beach sand on exposure to sunlight and wave action”. He said the sand taken from the marina entrance and the sand on Safety Beach had the same source - “the eroding Mount Martha cliffs”. “A [more than one hundred metre] plume of discoloured water caused by particle fines could also been seen for a few hours, however these fine particles quickly settled to the seabed,” Mr Coleman said. “Wave action from westerly winds at various stages of tide will quickly sort

all these sands into the range normally found on an active beach like Safety Beach.” He said the plume had no impact on recreational fishing and did not reach the offshore mussel farm. In December, the owners’ corporation estimated that 8000 cubic metres of sand would be dredged and spread along 350 metres of the beach south of the breakwater at the marina entrance (“Dredged sand to ‘renourish beach’” The News 22/12/20). Mr Coleman last week said debris in

the “relocated sands” was being collected “and disposed of where feasible”. “All Martha Cove stormwater drains have gross pollutant traps, so the source of this debris is unlikely to have been the marina,” he said. “Most likely it came from nearby Mount Martha, Dromana, and Safety Beach stormwater drains which mostly do not have traps or come generally from Port Phillip.” Mr Coleman said clay separated from the sand and trucked out. “This is the first time in 15 years that

marina entrance sand relocation has been required,” he said. “The recent stabilisation of the base of the Mount Martha cliffs means less sand will get trapped in the entrance. It is expected further sand relocation will not be required for some years to come.” Mr Coleman said the work had been approved by Mornington Peninsula Shire Council, Parks Victoria, the Department of Land, Water, Planning and Environment, and the Environment Protection Authority.