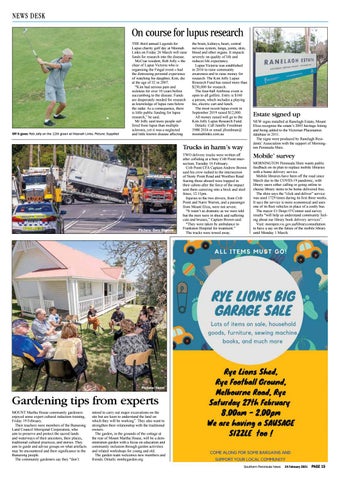 On course for lupus research

Off it goes: Rob Jolly on the 12th green at Moonah Links. Picture: Supplied

THE third annual Legends for Lupus charity golf day at Moonah Links on Friday 26 March will raise funds for research into the disease. McCrae resident, Rob Jolly – the chair of Lupus Victoria who is organising the Fingal event – had the distressing personal experience of watching his daughter, Kim, die at the age of 32 in 2007. “Kim had serious pain and sickness for over 10 years before succumbing to the disease. Funds are desperately needed for research as knowledge of lupus runs below the radar. As a consequence, there is little public funding for lupus research,” he said. Mr Jolly said more people suffered from lupus than multiple sclerosis, yet it was a neglected and little known disease affecting

the brain, kidneys, heart, central nervous system, lungs, joints, skin, blood and other organs. It impacts severely on quality of life and reduces life expectancy. Lupus Victoria was established in 2016 to raise community awareness and to raise money for research. The Kim Jolly Lupus Research Fund has raised more than $250,000 for research. The four-ball Ambrose event is open to all golfers. Entry is $160 a person, which includes a playing fee, electric cart and lunch. The most recent lupus event in September 2019 raised $12,000. All money raised will go to the Kim Jolly Lupus Research Fund. Details: Call Janelle Freedman 5988 2034 or email jfreedman@ moonahlinks.com.au

TWO delivery trucks were written off after colliding at a busy Crib Point intersection, Tuesday 16 February. Crib Point CFA Captain Andrew Brown said his crew rushed to the intersection of Stony Point Road and Woollies Road fearing those aboard were trapped in their cabins after the force of the impact sent them careering into a brick and steel fence, 12.11pm. Injuries to the two drivers, from Crib Point and Narre Warren, and a passenger from Mount Eliza, were not severe. “It wasn’t as dramatic as we were told but the men were in shock and suffering cuts and bruises,” Captain Brown said. “They were taken by ambulance to Frankston Hospital for treatment.” The trucks were towed away.

Estate signed up NEW signs installed at Ranelagh Estate, Mount Eliza recognise the estate’s 2005 heritage listing and being added to the Victorian Placenames database in 2011. The signs were produced by Ranelagh Residents’ Association with the support of Mornington Peninsula Shire.

Mobile’ survey MORNINGTON Peninsula Shire wants public feedback on its plan to replace mobile libraries with a home delivery service. Mobile libraries have been off the road since March due to the COVID-19 pandemic, with library users either calling or going online to choose library items to be home delivered free. The shire says the “click and deliver” service was used 1729 times during its first three weeks. It says the service is more economical and uses one of its fleet vehicles in place of a costly bus. The mayor Cr Despi O’Connor said survey results “will help us understand community feeling about our library book delivery services”. Visit: mornpen.vic.gov.au/libraryconsultation to have a say on the future of the mobile library until Monday 1 March.

Gardening tips from experts MOUNT Martha House community gardeners enjoyed some expert cultural induction training, Friday 19 February. Their teachers were members of the Bunurong Land Council Aboriginal Corporation, who aim to preserve and protect the sacred lands and waterways of their ancestors, their places, traditional cultural practices, and stories. They aim to guide and advise groups on what artefacts may be encountered and their significance to the Bunurong people. The community gardeners say they “don’t

intend to carry out major excavations on the site but are keen to understand the land on which they will be working”. They also want to strengthen their relationship with the traditional owners. The garden, in the grounds of the cottage at the rear of Mount Martha House, will be a demonstration garden with a focus on education and community inclusion through garden activities and related workshops for young and old. The garden team welcomes new members and friends. Details: mmhcgarden.org Southern Peninsula News