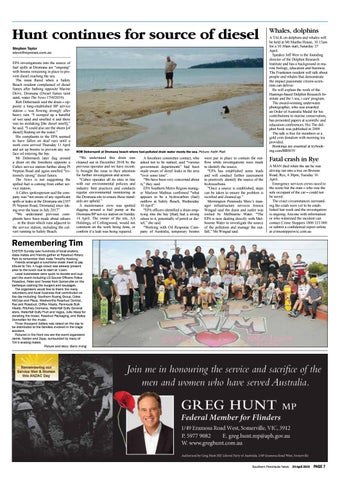 Hunt continues for source of diesel Stephen Taylor steve@mpnews.com.au EPA investigations into the source of fuel spills at Dromana are “ongoing” with booms remaining in place to prevent diesel reaching the sea. The issue flared when a Safety Beach resident complained of diesel fumes after bathing opposite Marine Drive, Dromana (Diesel fumes taint sand, water The News 17/4/2019). Rob Debernardi said the drain – opposite a long-established BP service station – was flowing strongly after heavy rain. “I scooped up a handful of wet sand and smelled it and there was no mistaking [the diesel smell],” he said. “I could also see the sheen [of diesel] floating on the water.” His complaints to the EPA seemed to have fallen on deaf ears until a work crew arrived Thursday 11 April and set up booms to prevent any surface oil entering the bay. Mr Debernardi later dug around a drain on the foreshore opposite a Caltex service station further along Pt Nepean Road and again smelled “extremely strong” diesel fumes. The News is not suggesting the spilled fuel is coming from either service station. A Caltex spokesperson said the company was “not aware of any significant spills or leaks at the Dromana site [107 Pt Nepean Road, Dromana] since taking over the lease in July 2017”. “We understand previous complaints have been made about odours … in the drain which runs adjacent to the service station, including the culvert running to Safety Beach.

“We understand this drain was cleaned out in December 2018 by the previous operator and we have recently brought the issue to their attention for further investigation and action. “Caltex operates all its sites in line with our environmental policies and industry best practices and conducts regular environmental monitoring at the Dromana site to ensure these standards are upheld.” A maintenance crew was spotted digging around a fuel pump at the Dromana BP service station on Sunday 14 April. The owner of the site, AA Holdings, of Collingwood, would not comment on the work being done, or confirm if a leak was being repaired.

A foreshore committee contact, who asked not to be named, said “various government departments” had been made aware of diesel leaks in the area “over some time”. “We have been very concerned about it,” they said. EPA Southern Metro Region manager Marleen Mathias confirmed “what appears to be a hydrocarbon (fuel) outflow at Safety Beach, Wednesday 10 April”. “EPA officers identified a drain emptying into the bay [that] had a strong odour to it, potentially of petrol or diesel,” she said. “Working with Oil Response Company of Australia, temporary booms

were put in place to contain the outflow while investigations were made to identify the source. “EPA has established some leads and will conduct further assessment to positively identify the source of the hydrocarbons. “Once a source is established, steps can be taken to ensure the problem is rectified and cleaned up.” Mornington Peninsula Shire’s manager infrastructure services Jessica Wingad said the drain and outlet was owned by Melbourne Water. “The EPA is now dealing directly with Melbourne Water to investigate the source of the pollution and manage the outfall,” Ms Wingad said.

Whales, dolphins A TALK on dolphins and whales will be held at Mt Martha House, 10.15am for a 10.30am start, Saturday 27 April. Speaker Jeff Weir is the founding director of the Dolphin Research Institute and has a background in marine biology, education and business. The Frankston resident will talk about people and whales that demonstrate the impact passionate citizen-scientists can deliver. He will explain the work of the Hastings-based Dolphin Research Institute and the &#39;i sea, i care&#39; program. The award-winning underwater photographer, who was awarded an Order of Australia Medal for his contributions to marine conservation, has presented papers at scientific and education conferences. His The dolphin book was published in 2009. The talk is free for members or a gold coin donation with morning tea provided. Bookings are essential at trybooking.com/BBSOV

Fatal crash in Rye A MAN died when the ute he was driving ran into a tree on Browns Road, Rye, 4.30pm, Tuesday 16 April. Emergency services crews raced to the scene but the man – who was the sole occupant of the car – could not be saved. The exact circumstances surrounding the crash were yet to be established last week and the investigation is ongoing. Anyone with information or who witnessed the incident can contact Crime Stoppers 1800 333 000 or submit a confidential report online at crimestoppersvic.com.au

Remembering Tim EASTER Sunday saw hundreds of local skaters, class mates and friends gather at Rosebud Rotary Park to remember their mate Timothy Hosking. Friends arranged a lunchtime skate meet to pay tribute to Tim. A huge crowd was already present prior to the lunch due to start at 11am. Local businesses were quick to donate and support the event including U3 Source Officers Police Proactive, Peter and Teresa from Somerville on the barbeque cooking the burgers and sausages. The organisers would like to thank the many volunteers and local business that contributed on the day including: Southern Buying Group, Coles McCrae and Plaza, Woolworths Rosebud Central, Rye and Rosebud, Cliffex Meats, Peninsula Bulk Meats, Ritchies Dromana, Waterfall Gully General store, Waterfall Gully Fruit and Veges, Julie Alsop for donating the bread, Rosebud Packaging, and Bailey Donnellan for the music. Three thousand dollars was raised on the day to be distributed to the families involved in the tragic accident. Pictured in the front row are the event organisers Jamie, Xaiden and Zepp, surrounded by many of Tim’s skating mates. Picture and story: Barry Irving