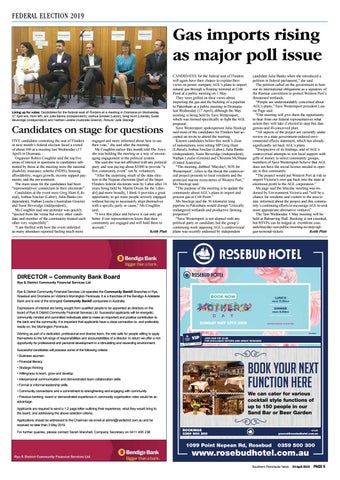 Lining up for votes: Candidates for the federal seat of Flinders at a meeting in Dromana on Wednesday 17 April are, from left, are Julia Banks (independent), Joshua Sinclair (Labor), Greg Hunt (Liberal), Susie Beveridge (independent) and Nathan Lesslie (Australia Greens). Picture: Julia Stockigt

Candidates on stage for questions FIVE candidates contesting the seat of Flinders in next month’s federal election faced a crowd of about 100 at a meeting last Wednesday (17 April) in Dromana. Organiser Robyn Coughlin said the top five areas of interest in questions to candidates submitted by those at the meeting were the national disability insurance scheme (NDIS); housing affordability; wages growth; income support payments; and the environment. The main issue for the candidates had been “representatives’ connection to their electorate”. Candidates at the event were Greg Hunt (Liberal), Joshua Sinclair (Labor), Julia Banks (independent), Nathan Lesslie (Australian Greens) and Susie Beveridge (independent)., Ms Coughlin said one protester was quickly “ejected from the venue but every other candidate and member of the community treated each other very respectfully”. “I am thrilled with how the event unfolded as many attendees reported feeling much more

engaged and more informed about how to use their vote,” she said after the meeting. Ms Coughlin earlier this month told The News she was holding the meeting as a way of encouraging engagement in the political system. She said she was not affiliated with any political party and was paying about $1000 to provide “a free community event” run by volunteers. “After the surprising result of the state election in the Nepean electorate [part of the larger Flinders federal electorate won by Labor after 14 years being held by Martin Dixon for the Liberals] and more broadly, I think it provides a great opportunity to get more people actively engaged without having to necessarily align themselves with a specific party or cause,” Ms Coughlin said. “I love this place and believe it can only get better if our representatives know that their community are engaged and will hold them to account.” Keith Platt

CANDIDATES for the federal seat of Flinders will again have their chance to explain their views on power company AGL’s plans to import natural gas through a floating terminal at Crib Point at a public meeting on 1 May. They were grilled on their views about importing the gas and the building of a pipeline to Pakenham at a public meeting in Dromana last Wednesday (17 April), although the May meeting is being held by Save Westernport, which was formed specifically to fight the AGL proposal. Save Westernport spokesperson Julia Stockigt said most of the candidates for Flinders had accepted an invite to attend the meeting. Known candidates before this week’s close of nominations were sitting MP Greg Hunt (Liberal), Joshua Sinclair (Labor), Julia Banks (independent), Susie Beveridge (independent), Nathan Lesslie (Greens) and Christine McShane (United Australia). “The meeting, dubbed ‘Mayday!, SOS for Westernport’, refers to the threat the controversial project presents to local residents and the protected marine ecosystems of Western Port,” Ms Stockigt said. “The purpose of the meeting is to update the community about AGL’s plans to import and process gas at Crib Point.” Ms Stockigt said the 56 kilometre long pipeline to Pakenham would disrupt “critically endangered wetlands and productive farming properties”. “Save Westernport is not aligned with any political party or candidate, but the group’s continuing work opposing AGL’s controversial plans was recently endorsed by independent

candidate Julia Banks when she introduced a petition in federal parliament,” she said. The petition called on the government to honour its international obligations as a signatory of the Ramsar convention to protect Western Port’s threatened wetlands. “People are understandably concerned about AGL’s plans,” Save Westernport president Louise Page said. “Our meeting will give them the opportunity to hear from our federal representatives what action they will take if elected to stop this dangerous and ill-conceived plan. “All aspects of the project are currently under review in a state government-ordered environmental effects statement, which has already significantly set back AGL’s plans. “Irrespective of its findings, and of AGL’s controversial attempts to win local support with gifts of money to select community groups, members of Save Westernport believe that AGL does not have the social licence needed to operate in this community. “The project would put Western Port at risk to import Victoria’s own gas back into the state at enormous profit to the AGL corporation.” Ms page said the Mayday meeting was endorsed by Environment Victoria and “will be a chance for residents and visitors to the area to stay informed about the project and this community’s continuing efforts to encourage AGL to seek more appropriate alternative ventures”. The 7pm Wednesday 1 May meeting will be held at Balnarring Hall. Booking is not essential, but RSVPs can be lodged at: eventbrite.com. au/e/mayday-sos-public-meeting-to-stop-aglgas-terminal-tickets Keith Platt

community minded and committed individuals able to make an important and positive contribution to Working as part of a dedicated, professional and diverse team, the role calls for people willing to apply the bank and the It is important that applicants a close connection themselves to the fullcommunity. range of responsibilities and accountabilities of ahave director. In return we offer a to, and preferably rich opportunity professionalPeninsula. and personal development in a stimulating and rewarding reside on, thefor Mornington

Working part of awill dedicated, professional andcriteria: diverse team, the role calls for people willing to apply Successfulas candidates possess some of the following themselves to the full range of responsibilities and accountabilities of a director. In return we offer a rich opportunity for professional and personal development in a stimulating and rewarding environment.

JOIN OUR VIP CLUB FOR EXCLUSIVE OFFERS AND GREAT REWARDS

Successful candidates will possess some of the following criteria: • acumen Business acumen • Business •

BOOK YOUR NEXT FUNCTION HERE

Community connections and a commitment to strengthening and engaging with community

Previous banking, board or demonstrated experience in community organisation roles would

• Communitybeconnections an advantage.and a commitment to strengthening and engaging with community

• Previous banking, or to demonstrated experience in their community organisation roles would Applicants areboard required send a 1-2 page letter outlining experience, what they would bring to be an the board, and addressing the above selection criteria. advantage. Applications should be addressed to the Chairman via email at admin@ryedistrict.com.au and be

Applicants are required to send 1-2 page letter outlining their experience, what they would bring to received no later than 3 Maya 2019. the board, and addressing the above selection criteria. For further queries, please contact Sarah Marshall, Company Secretary on 0411 406 238

Applications should be addressed to the Chairman via email at admin@ryedistrict.com.au and be received no later than 3 May 2019. For further queries, please contact Sarah Marshall, Company Secretary on 0411 406 238