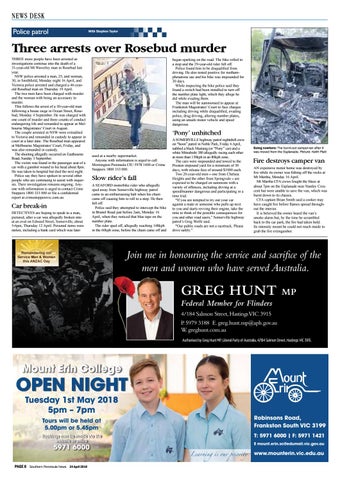 Three arrests over Rosebud murder THREE more people have been arrested as investigations continue into the death of a 31-year-old Mt Waverley man in Rosebud last year. NSW police arrested a man, 25, and woman, 30, in Smithfield, Monday night 16 April, and Victoria police arrested and charged a 46-yearold Rosebud man on Thursday 19 April. The two men have been charged with murder and the woman with being an accessory to murder. This follows the arrest of a 30-year-old man following a house siege in Ocean Street, Rosebud, Monday 4 September. He was charged with one count of murder and three counts of conduct endangering life and remanded to appear at Melbourne Magistrates’ Court in August. The couple arrested in NSW were extradited to Victoria and remanded in custody to appear in court at a later date. The Rosebud man appeared at Melbourne Magistrates’ Court, Friday, and was also remanded in custody. The shooting allegedly occurred on Eastbourne Road, Sunday 3 September. The victim was found in the passenger seat of a car with a gunshot wound to his head about 8pm. He was taken to hospital but died the next night. Police say they have spoken to several other people who are continuing to assist with inquiries. Their investigation remains ongoing. Anyone with information is urged to contact Crime Stoppers 1800 333 000 or file a confidential report at crimestoppersvic.com.au

Car break-in DETECTIVES are hoping to speak to a man, pictured, after a car was allegedly broken into at an oval on Edward Street, Somerville, about 5-6pm, Thursday 12 April. Personal items were stolen, including a bank card which was later

began sparking on the road. The bike rolled to a stop and the 29-year-old rider fell off. Police found him to be disqualified from driving. He also tested positive for methamphetamine use and his bike was impounded for 30 days. While inspecting the bike police said they found a switch had been installed to turn off the number plate light, which they allege he did while evading them. The man will be summonsed to appear at Frankston Magistrates’ Court to face charges including driving while disqualified, evading police, drug driving, altering number plates, using an unsafe motor vehicle and speed dangerous.

‘Pony’ unhitched used at a nearby supermarket. Anyone with information is urged to call Mornington Peninsula CIU 5978 1400 or Crime Stoppers 1800 333 000.

Slow rider’s fall A SEAFORD motorbike rider who allegedly sped away from Somerville highway patrol came to an embarrassing halt when his chain came off causing him to roll to a stop. He then fell off. Police said they attempted to intercept the bike in Brunel Road just before 2am, Monday 16 April, when they noticed that blue tape on the number plate. The rider sped off, allegedly reaching 148kph in the 60kph zone, before the chain came off and

A SOMERVILLE highway patrol nightshift crew on “hoon” patrol in Noble Park, Friday 6 April, nabbed a black Mustang (or “Pony” car) and a white Mitsubishi 380 allegedly racing each other at more than 130kph in an 80kph zone. The cars were impounded and towed to the Preston impound yard for a minimum of 30 days, with release fees of around $1000 each. Two 20-year-old men – one from Chelsea Heights and the other from Springvale – are expected to be charged on summons with a variety of offences, including driving at a speed/manner dangerous and participating in a time trial. “If you are tempted to try out your car against a mate or someone who pulls up next to you and starts revving their engine, take the time to think of the possible consequences for you and other road users,” Somerville highway patrol’s Greg Wolfe said. “Our public roads are not a racetrack. Please drive safely.”

Going nowhere: The burnt-out campervan after it was moved from the Esplanade. Picture: Keith Platt

Fire destroys camper van AN expensive motor home was destroyed by fire while its owner was fishing off the rocks at Mt Martha, Monday 16 April. Mt Martha CFA crews fought the blaze at about 7pm on the Esplanade near Stanley Crescent but were unable to save the van, which was burnt down to its chassis. CFA captain Brian Smith said a cooker may have caught fire before flames spread throughout the interior. It is believed the owner heard the van’s smoke alarm but, by the time he scrambled back to the car park, the fire had taken hold. Its intensity meant he could not reach inside to grab the fire extinguisher.