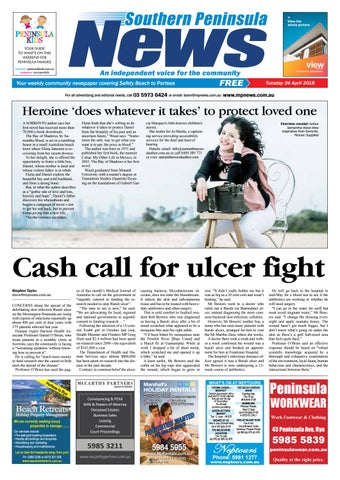 Heroine ‘does whatever it takes’ to protect loved one A SORRENTO author says her first novel has received more than 70,000 e-book downloads. The Bay of Shadows, by Samantha Wood, is set in a rambling house in a small Australian beach town where Elena Jameson is recovering from her recent divorce. To her delight, she is offered the opportunity to foster a little boy, Daniel, whose mother is dead and whose violent father is in rehab. Elena and Daniel explore the beautiful bay and wild bushland, and form a strong bond. But, in what the author describes as a “gothic tale of love and loss, bravery and hope”, Daniel’s father discovers his whereabouts and begins a campaign of terror – not to get his son back, but to prevent Elena giving him a new life. “As the violence escalates,

Elena finds that she’s willing to do whatever it takes to protect Daniel from the brutality of his past and an uncertain future,” Wood says. “Sometimes the only way to get what you want is to pay the price in blood.” The author was born in 1971 and published her first book, the memoir Culua: My Other Life in Mexico, in 2003. The Bay of Shadows is her first novel. Wood graduated from Monash University with a master's degree in Translation Studies (Spanish) focusing on the translations of Gabriel Gar-

Cash call for ulcer fight Stephen Taylor steve@mpnews.com.au CONCERNS about the spread of the debilitating skin infection Buruli ulcer on the Mornington Peninsula are rising with reports of infections reportedly up about 400 per cent in four years with 275 patients infected last year. Disease expert Barwon Health Associate Professor Daniel O’Brien, who treats patients at a monthly clinic at Sorrento, says the community is facing a “worsening epidemic without knowing how to prevent it”. He is calling for “much more money to fund research into the causes to help stem the spread of the disease”. Professor O’Brien has used the pag-

es of this month’s Medical Journal of Australia to call on the government to “urgently commit to funding the research needed to stop Buruli ulcer”. “The time to act is now,” he said. “We are advocating for local, regional and national governments to urgently commit to funding research …” Following the infection of a 13-yearold Tyabb girl in October last year, Health Minister and Flinders MP Greg Hunt said $2.4 million had been spent on research since 2000 – the equivalent of $141,000 a year. The Department of Health and Human Services says almost $800,000 has been spent on research into the disease in the past decade. Contrary to common belief the ulcer-

causing bacteria, Mycobacterium ulcerans, does not enter the bloodstream. It infects the skin and subcutaneous tissue and has to be treated with heavyduty antibiotics and often surgery. This is cold comfort to Seaford resident Rob Bowers who was diagnosed as having a Buruli ulcer after a bit of metal scratched what appeared to be a mosquito bite near his right ankle. “I’d been bitten by mosquitoes near the Powlett River [Bass Coast] and a March fly at Gunnamatta. While at work I dropped a bit of sheet metal, which scratched me and opened it up a little,” he said. A keen surfer, Mr Bowers said the collar on his leg rope also aggravated the wound, which began to grow in

size. “It didn’t really bother me but it was as big as a 20 cent coin and wasn’t healing,” he said. Mr Bowers went to a doctor who ruled out a Buruli (or Bairnsdale) ulcer, instead diagnosing the more common bacterial skin infection, cellulitis. However, Mr Bowers’ mother Sue, a nurse who has seen many patients with buruli ulcers, arranged for him to visit the Mt Martha clinic where she works. A doctor there took a swab and within a week confirmed his wound was a buruli ulcer and booked an appointment for him at Frankston Hospital. The hospital’s infectious diseases officer agreed it was a Buruli ulcer and Mr Bowers is now undergoing a 12week course of antibiotics.

Beach Retreats Holiday Property Management We are currently seeking luxury properties to manage......... Our services include: • Pre and post booking inspections • Handle all bookings and enquiries • Advertising and marketing • Housekeeping and maintenance Let us take the headache away from you! Ph: 5988 5589 or 0419 301 928 www.beachretreatsvic.com.au

we are the largest on the Mornington Peninsula

He will go back to the hospital in mid-May for a blood test to see if the antibiotics are working or whether he will need surgery. “I can go in the water [to surf] but must avoid stagnant water,” Mr Bowers said. “I change the dressing every night and apply manuka honey. The wound hasn’t got much bigger, but I don’t know what’s going on under the skin as there’s a golf ball-sized area that feels quite hard.” Professor O’Brien said an effective response should be based on “robust scientific knowledge acquired by a thorough and exhaustive examination of the environment, local fauna, human behaviour and characteristics, and the interactions between them.”

Quality at the right price.