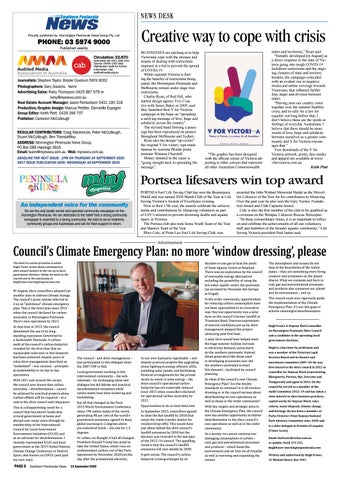 Creative way to cope with crisis BUSINESSES are pitching in to help Victorians cope with the stresses and strains of dealing with restrictions imposed in a bid to prevent the spread of COVID-19. While regional Victoria is feeling the benefits of restrictions being eased, the Mornington Peninsula and Melbourne remain under stage four restrictions. Charlie Ryan, of Red Hill, who started design agency Five Creative with James Baker in 2009, said they launched their V for Victoria campaign in the hope on “spreading a unifying message of love, hope and solidarity across the country”. The stylised hand forming a peace sign has been reproduced on posters throughout Melbourne and Sydney. Ryan says his design “up-cycles” the original V for victory sign made famous by wartime British prime minister Winston Churchill. Money donated to the cause is “going straight back to spreading the message”.

states and territories,” Ryan said. “Initially developed [in August] as a direct response to the state of Victoria going into tough COVID-19 lockdown restrictions and the ongoing closures of state and territory borders, the campaign coincided with an evident rise in negative media and online coverage towards Victorians, that inflamed further fear, anger and division between states. “Having seen our country come together over the summer bushfire crisis, and to rally for a law for equality not long before that, I don’t believe these are the words or feelings of everyday Australians. I believe that there should be more words of love, hope and solidarity between ourselves as a greater community and V for Victoria encourages that.” Free downloads of the V for Victoria artwork, prints, face masks and apparel are available at www. vforvictoria.com.au Keith Platt

awarded the John Wishart Memorial Medal as the Microflite Lifesaver of the Year for his contribution to lifesaving. Over the past year he also won the Gary Tierney Foundation Award and Club Captains Award. Cole is also the first member of his club to be qualified as a crewman on the Westpac Lifesaver Rescue Helicopter. “In these extraordinary times, it is so important to reflect on and celebrate the achievements of all our volunteers, staff and members of the broader aquatic community,” Life Saving Victoria president Paul James said.

Council’s Climate Emergency Plan: no more ‘window dressing’, please The third in a series of articles in which Hugh Fraser writes about contemporary shire council matters in the run-up to local government elections. Follow his work on the council and in the community at hughfraser-morningtonpeninsula.com

decision to use gas to heat the pools of Yawa Aquatic Centre at Rosebud. There was no exploration by the council of renewable energy alternatives including the possibility of using the hot water aquifer under the peninsula (as accessed by Peninsula Hot Springs at Fingal).

IN August, shire councillors adopted yet another plan to address climate change. The council’s press release referred to it as an “ambitious” climate emergency plan. This is the third plan since 2015 when the council declared for carbon neutrality in Mornington Peninsula Shire’s own operations by 2021. At that time in 2015, the council abandoned the use of its longstanding expression Committed to a Sustainable Peninsula. A carbon audit of the council’s carbon footprint revealed for the first time that no measurable reduction in this footprint had been achieved, despite years of what shire management described as “embedded” – but vacuous – principles of sustainability in its day to day operations.

With 2021 just around the corner, the council now knows that carbon neutrality – decarbonisation – cannot be achieved by practical projects alone. Carbon offsets will be required – at a cost to the shire council and ratepayers. This is a disappointing result for a council that has shown leadership in local government at home and abroad over many years through its membership of the International Council for Local Government Environment Initiatives (ICLEI) and as an advocate for decarbonisation. I recently represented ICLEI and local government at the 2019 United Nations Climate Change Conference in Madrid, Spain, also known as COP25 (and paid my own way).

In the wider community, opportunities for reducing carbon consumption have not been approached in an innovative way. One lost opportunity was a solar farm on the council’s former landfill at Truemans Road. Onerous expressions of interest conditions put up by shire management stopped the project advancing past first base.

The council – and shire management – has participated in this dialogue since the 2007 COP in Bali. Local government working in this international community – the subnationals – by exchanging ideas and dialogue has led debate and practical decarbonisation initiatives while nation states have been bickering and backsliding.

But all that changed at the Paris 2015 World Environment Conference when 196 nation states of the world, generating 98 per cent of the world’s greenhouse emissions, agreed to keep global warming to 2 degrees above pre-industrial levels – but aim for 1.5 degrees.

Or rather, we thought it had all changed. President Donald Trump has acted to take the United States, which runs on undiminished carbon, out of the Paris Agreement by November 2020 (on the day after the presidential election).

In our own backyard, regrettably – and despite practical projects like upgrading street lighting to energy efficient LEDs, installing solar panels, and facilitating financial arrangements for the private sector to invest in solar energy – the shire council’s operational carbon footprint has not materially reduced since 2015 when councillors declared for operational carbon neutrality by 2021. Opportunities to do so have been lost.

So what of the council’s new Climate Emergency Plan? Are the double standards to continue? Is it all window dressing or is the council serious about decarbonising its own operations as well as those in the wider community?

With key targets and strategic aims in the Climate Emergency Plan, the council now has another opportunity to deliver decarbonisation in the shire council’s own operations as well as in the wider community. As a society we cannot continue our damaging consumption of carbon – coal, gas and petrochemical processes and products – which heats the environment and air that we all breathe as well as warming and expanding the oceans.

The atmosphere and oceans do not stop at the boundaries of the nation states – they are something every living creature and ecosystem on the planet shares. What we consume and burn in coal, gas and petrochemical processes and products also consumes our planet and its environment – and us. The council must now rigorously guide the implementation of the Climate Emergency Plan. It’s our last gasp to achieve meaningful decarbonisation. Hugh Fraser is Nepean Ward councillor on Mornington Peninsula Shire Council and a candidate in the upcoming local government elections. Hugh is a barrister by profession and was a member of the Victorian Legal Services Board and its finance and investment committee 2007–10. He was first elected to the shire council in 2012 as councillor for Nepean Ward (representing Blairgowrie, Portsea, Rye, Sorrento and Tootgarook) and again in 2016. On the council he served as a member of the Audit Committee 2012–19 and has taken a close interest in shire business practices, capital works for Nepean Ward, rates reform, waste disposal, climate change, and heritage. He has been a member of Parks Victoria’s Point Nepean National Park Advisory Committee since 2018 and is a shire delegate to Friends of Lospalos (Timor-Leste). Email: hwfraser@vicbar.com.au or mobile: 0418 379 335; hughfraser-morningtonpeninsula.com Written and authorised by Hugh Fraser, 12 Michael Street, Rye 3941