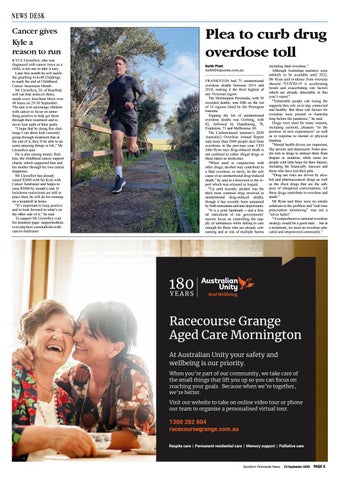 Cancer gives Kyle a reason to run KYLE Llewellyn, who was diagnosed with cancer twice as a child, is not one to take it easy. Later this month he will tackle the gruelling 4x4x48 Challenge to mark the end of Childhood Cancer Awareness Month. Mr Llewellyn, 20, of Rosebud, will run four miles (6.4km), inside every four-hour block over 48 hours on 29-30 September. The aim is to encourage children with cancer to focus on something positive to help get them through their treatment and to never lose sight of their goals. “I hope that by doing this challenge I can show kids currently going through treatment that at the end of it, they’ll be able to do some amazing things in life,” Mr Llewellyn said. He is also raising money Redkite, the childhood cancer support charity which supported him and his mother through his two cancer diagnoses. Mr Llewellyn has already raised $2000 with his Kids with Cancer fundraiser and hopes to raise $5000 by month’s end. If lockdown restrictions are still in place then, he will do his running on a treadmill at home. “It’s important to keep positive and to look forward to what’s on the other side of it,” he said. To support Mr Llewellyn visit his donation page: supportredkite. everydayhero.com/au/kids-withcancer-fundraiser

Plea to curb drug overdose toll Keith Platt keith@mpnews.com.au FRANKSTON had 71 unintentional overdose deaths between 2014 and 2018, making it the third highest of any Victorian region. The Mornington Peninsula, with 50 recorded deaths, was fifth on the list of 14 regions listed by the Penington Institute. Topping the list of unintentional overdose deaths was Geelong, with 82, followed by Dandenong, 78, Frankston, 71 and Melbourne, 60. The Carlton-based institute’s 2020 Australia’s Overdose Annual Report said more than 2000 people died from overdoses in the previous year. CEO John Ryan says drug-induced death is not confined to either illegal drugs or those taken as medicines. “When used in conjunction with other drugs, alcohol may contribute to a fatal overdose, or rarely, be the sole cause of an unintentional drug-induced death,” he said in a foreword to the report which was released in August. “Up until recently, alcohol was the third most common drug involved in unintentional drug-induced deaths, though it has recently been surpassed by both stimulants and anti-depressants. “It is a grim landmark – and a brutal indictment of our governments’ narrow focus on controlling the supply of substances while failing to care enough for those who are already consuming and at risk of multiple harms

including fatal overdose.” Although Australian statistics were unlikely to be available until 2022, Mr Ryan said evidence from overseas showed “COVID-19 is accelerating trends and exacerbating risk factors which are already detectable in this year’s report”. “Vulnerable people risk losing the supports they rely on to stay connected and healthy. But these risk factors for overdose were present in Australia long before the pandemic,” he said. Drugs were used for many reasons, including curiosity, pleasure “or the promise of new experiences” as well as in response to mental or physical traumas. “Mental health drivers are important, like anxiety and depression. Some people turn to drugs to distract them from despair or isolation, while some are people with little hope for their futures, including the financially insecure and those who have lost their jobs. “Drug use risks are driven by alcohol and pharmaceutical drugs as well as the illicit drugs that are the subjects of whispered conversations. All these drugs contribute to overdose and death.” Mr Ryan said there were no simple solutions to the problem and “real time prescription monitoring” was not a “silver bullet”. “A comprehensive national overdose strategy would be a good start ... but at a minimum, we need an overdose educated and empowered community.”

Racecourse Grange Aged Care Mornington At Australian Unity your safety and wellbeing is our priority. When you’re part of our community, we take care of the small things that lift you up so you can focus on reaching your goals. Because when we’re together, we’re better. Visit our website to take on online video tour or phone our team to organise a personalised virtual tour.