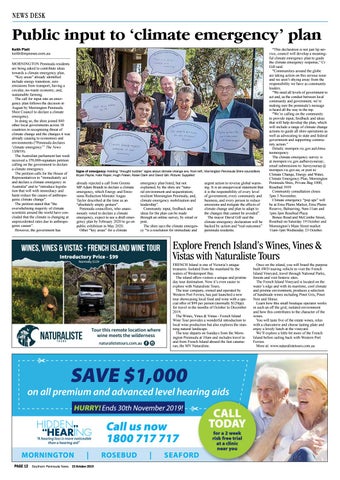 Public input to ‘climate emergency’ plan Keith Platt keith@mpnews.com.au MORNINGTON Peninsula residents are being asked to contribute ideas towards a climate emergency plan. “Key areas” already identified include energy transition; zero emissions from transport; having a circular, no-waste economy; and, sustainable farming. The call for input into an emergency plan follows the decision in August by Mornington Peninsula Shire Council to declare a climate emergency. In doing so, the shire joined 840 other local governments across 18 countries in recognising threat of climate change and the changes it was already causing to economies and environments (“Peninsula declares ‘climate emergency’” The News 13/8/19). The Australian parliament last week received a 370,000-signature petition calling on the government to declare a climate emergency. The petition calls for the House of Representatives to "immediately act and declare a climate emergency in Australia" and to "introduce legislation that will with immediacy and haste reduce the causes of anthropogenic climate change". The petition stated that "the overwhelming majority of climate scientists around the world have concluded that the climate is changing at unprecedented rates due to anthropogenic causes”. However, the government has

emergency plan listed, but not explained, by the shire are “natural environment and sequestration; resilient Mornington Peninsula; and, climate emergency mobilisation and leadership”. Community input, feedback and ideas for the plan can be made through an online survey, by email or post. The shire says the climate emergency “is a resolution for immediate and

Tour this remote location where wine meets the wilderness naturalistetours.com.au

urgent action to reverse global warming. It is an unequivocal statement that it is the responsibility of every level of government, every community and business, and every person to reduce emissions and mitigate the effects of climate change and plan to adapt to the changes that cannot be avoided”. The mayor David Gill said the climate emergency declaration will be backed by action and “real outcomes” peninsula residents.

FRENCH Island is one of Victoria’s unique treasures. Isolated from the mainland by the waters of Westernport Bay. The island offers visitors a unique and pristine day tour destination. Now it’s even easier to explore with Naturaliste Tours. The tour company, owned and operated by Western Port Ferries, has just launched a new tour showcasing local food and wine with a special offer of $99 per person (normally $129pp) for travel in the months of October to December 2019. The Wines, Vines & Vistas - French Island Wine Tour provides a wonderful introduction to local wine production but also explores the stunning natural landscape. The tour departs on Sundays from the Mornington Peninsula at 10am and includes travel to and from French Island aboard the fast catamaran, the MV Naturaliste.

“This declaration is not just lip service, council will develop a meaningful climate emergency plan to guide the climate emergency response,” Cr Gill said. “Communities around the globe are taking action on this serious issue and we aren’t shying away from the responsibility we have as community leaders. “We need all levels of government to act and, as the conduit between local community and government, we’re making sure the peninsula’s message is heard all the way to the top. “We’re calling on the community to provide input, feedback and ideas that will help develop the plan, which will include a range of climate change actions to guide all shire operations as well as advocating to state and federal government and supporting community action.” Details: mornpen.vic.gov.au/climateemergency The climate emergency survey is at mornpen.vic.gov.au/haveyoursay; email submissions to: haveyoursay@ mornpen.vic.gov.au; or post to: Climate Change, Energy and Water, Climate Emergency Plan, Mornington Peninsula Shire, Private Bag 1000, Rosebud 3939 Community consultation closes 5pm 3 November. Climate emergency “pop ups” will be at Emu Plains Market, Emu Plains Reserve, Balnarring, 9am-11am and 1pm-3pm Rosebud Plaza Boneo Road and McCombe Street, Rosebud on Saturday 19 October and Mornington’s Main Street market 11am-1pm Wednesday 23 October.

Once on the island, you will board the purpose built 4WD touring vehicle to visit the French Island Vineyard, travel through National Parks, forests and visit historic sites. The French Island Vineyard is located on the water’s edge and with its maritime, cool climate and pristine environment, produces a selection of handmade wines including Pinot Gris, Pinot Noir and Shiraz. Learn how this small boutique operator works in such an off the grid, isolated environment and how this contributes to the character of the wines. You will taste five of the estate wines, relax with a charcuterie and cheese tasting plate and enjoy a lovely lunch at the vineyard. We’ll explore a little bit more of the French Island before sailing back with Western Port Ferries. More at: www.naturalistetours.com.au