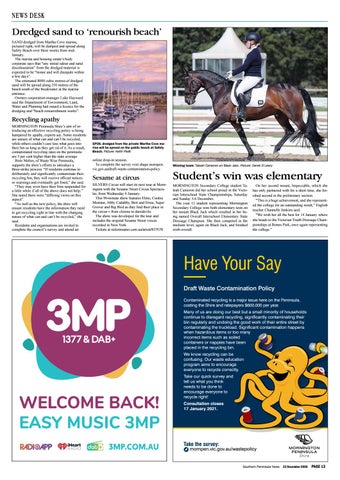 Dredged sand to ‘renourish beach’ SAND dredged from Martha Cove marina, pictured right, will be dumped and spread along Safety Beach over three weeks from midJanuary. The marina and housing estate’s body corporate says that “any initial odour and sand discolouration” from the dredged material is expected to be “minor and will dissipate within a few days”. The estimated 8000 cubic metres of dredged sand will be spread along 350 metres of the beach south of the breakwater at the marina entrance. Owners corporation manager Luke Hayward said the Department of Environment, Land, Water and Planning had issued a licence for the dredging and “beach renourishment works”.

Recycling apathy MORNINGTON Peninsula Shire’s aim of introducing an effective recycling policy is being hampered by apathy, experts say. Some residents are unsure of what can and can’t be recycled, while others couldn’t care less what goes into their bin as long as they get rid of it. As a result, contaminated recycling rates on the peninsula are 5 per cent higher than the state average. Birte Molier, of Waste Wise Peninsula, supports the shire’s efforts to introduce a three-strike process. “If residents continue to deliberately and significantly contaminate their recycling bin, they will receive official notices or warnings and eventually get fined,” she said. “They may even have their bins suspended for a little while if all of the above does not help.” She noted there were “differing views on this aspect”. “As well as the new policy, the shire will ensure residents have the information they need to get recycling right in line with the changing nature of what can and can’t be recycled,” she said. Residents and organisations are invited to complete the council’s survey and attend an

SPOIL dredged from the private Martha Cove marina will be spread on the public beach at Safety Beach. Picture: Keith Platt

Sesame at circus SILVERS Circus will start its next tour at Mornington with the Sesame Street Circus Spectacular, from Wednesday 6 January. This 90-minute show features Elmo, Cookie Monster, Abby Cadabby, Bert and Ernie, Super Grover and Big Bird as they find their place in the circus – from clowns to daredevils. The show was developed for the tour and includes the original Sesame Street voices recorded in New York. Tickets at ticketmaster.com.au/artist/837678

On her second mount, Impeccable, which she has only partnered with for a short time, she finished second in the preliminary section. “This is a huge achievement, and she represented the college for an outstanding result,” English teacher Channelle Jenkins said. “We wish her all the best for 14 January where she heads to the Victorian Youth Dressage Championships at Boneo Park, once again representing the college.”

Have Your Say Draft Waste Contamination Policy Contaminated recycling is a major issue here on the Peninsula, costing the Shire and ratepayers $600,000 per year. Many of us are doing our best but a small minority of households continue to disregard recycling, significantly contaminating their bin regularly and undoing the good work of their entire street by contaminating the truckload. Significant contamination happens when hazardous items or too many incorrect items such as soiled containers or nappies have been placed in the recycling bin. We know recycling can be confusing. Our waste education program aims to encourage everyone to recycle correctly. Take our quick survey and tell us what you think needs to be done to encourage everyone to recycle right! Consultation closes 17 January 2021.