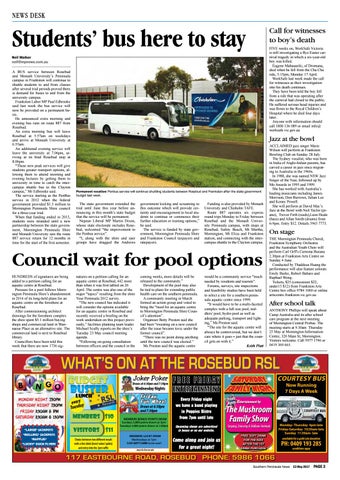 Call for witnesses to boy’s death FIVE weeks on, WorkSafe Victoria is still investigating a Rye Easter carnival tragedy in which a six-year-old boy was killed. Eugene Mahauariki, of Dromana, died when he fell from the Cha Cha ride, 5.15pm, Monday 17 April. WorkSafe last week made the call for witnesses as their investigation into his death continues. They have been told the boy fell from a ride that was operating after the carnival had closed to the public. He suffered serious head injuries and was flown to the Royal Children’s Hospital where he died four days later. Anyone with information should call 1800 136 089 or email info@ worksafe.vic.gov.au

Neil Walker neil@mpnews.com.au A BUS service between Rosebud and Monash University’s Peninsula campus in Frankston will continue to shuttle students to and from classes after several trial periods proved there is demand for buses to and from the university campus. Frankston Labor MP Paul Edbrooke said last week the bus service will now be provided on a permanent basis. He announced extra morning and evening bus runs on route 887 from Rosebud. An extra morning bus will leave Rosebud at 5.57am on weekdays and arrive at Monash University at 6.55am. An additional evening service will leave the university at 7.06pm, arriving at its final Rosebud stop at 8.06pm. “These new peak services will give students greater transport options, allowing them to attend morning and evening lectures by getting them to university in time to catch the intercampus shuttle bus to the Clayton campus,” Mr Edbrooke said. The service starting as the PenBus service in 2012 when the federal government provided $1.5 million to Mornington Peninsula Shire council for a three-year trial. When that funding ended in 2015, students were stranded until a new partnership between the state government, Mornington Peninsula Shire and Monash University saw the route 887 service return for 12 months in time for the start of the first semester.

Jazz at the bowl

The state government extended the trial until June this year before announcing in this month’s state budget that the service will be permanent. Nepean Liberal MP Martin Dixon, whose state electorate includes Rosebud, welcomed “the improvement to the Penbus service”. “I, along with the shire and user groups have dragged the Andrews

government kicking and screaming to this outcome which will provide certainty and encouragement to local students to continue or commence their further education or training options,” he said. The service is funded by state government, Mornington Peninsula Shire and Frankston Council taxpayers and ratepayers.

Funding is also provided by Monash University and Chisholm TAFE. Route 887 operates six express round trips Monday to Friday between Rosebud and the Monash University Peninsula campus, with stops at Rosebud, Safety Beach, Mt Martha, Mornington, Mt Eliza and Frankston station, and connecting with the intercampus shuttle to the Clayton campus.

Council wait for pool options HUNDREDS of signatures are being added to a petition calling for an aquatic centre at Rosebud. Pressure for a pool follows Mornington Peninsula Shire’s abandonment in 2014 of its long-held plans for an aquatic centre on the foreshore at Rosebud. After commissioning architect drawings for the foreshore complex the shire spent $5.1 million buying shops and commercial land in Wannaeue Place as an alternative site. The commercial land is next to Rosebud library. Councillors have been told this week that there are now 1736 sig-

natures on a petition calling for an aquatic centre at Rosebud, 442 more than when it was first tabled on 26 April. The centre was also one of the major “topics” resulting from the shire Your Peninsula 2012 survey. “The new council has indicated it will consider the options available for an aquatic centre in Rosebud and recently received a briefing on the work undertaken on this project previously,” facilities planning team leader Michael Scully reports on the shire’s Tuesday 23 May council meeting agenda. “Following on-going consultation between officers and the council in the

coming weeks, more details will be released to the community.” Development of the pool may also be tied to plans for extending public health care on the southern peninsula. A community meeting in March formed an action group and voted to bring the “need for an aquatic centre to Mornington Peninsula Shire Council’s attention”. Organiser Betty Preston said she had been “sweating on a new council after the issue became toxic under the former council”. “There was no point doing anything until the new council was elected.” Ms Preston said the aquatic centre

would be a community service “much needed by residents and tourists”. Forums, surveys, site inspections and feasibility studies have been held to select a site for a southern peninsula aquatic centre since 1999. “It would have to be a multi-faceted complex with a full size pool, toddlers’ pool, hydro pool as well as adequate parking, transport and lighting,” Ms Preston said. “The site for the aquatic centre will always be controversial, but we don’t care where it goes – just that the council gets on with it.” Keith Platt

After school talk ANTHONY Phillips will speak about Camp Australia and its after school care program at the next meeting of Mornington Central Probus. The meeting starts at 9.30am Thursday 25 May at Mornington Information Centre, 320 Main St, Mornington. Visitors welcome. Call 5977 1746 or 0419 369 665.

ACCLAIMED jazz singer Marie Wilson will perform at Frankston Bowling Club on Sunday 28 July. The Sydney vocalist, who was born in India of Anglo-Indian parents, has carved a career in jazz since migrating to Australia in the 1960s. In 1988, she was named NSW Jazz Singer of the Year, followed up by Mo Awards in 1995 and 1999. She has worked with Australia’s leading musicians including James Morrison, Don Burrows, Julian Lee and Kenny Powell. She will perform at David May’s Jazz at the Bowl with Neil Taylor (piano), Trevor Firth (reeds),Leon Heale (bass) and Allan Smith (drums) from 6-9pm. Entry $12. Details 5945 7773.

Every Friday night we have a band playing in Poppies Bistro from 7pm until late Upcoming shows are advertised in house or on our website.

Come along and join us for a great night!

from Entertainment by 6pm