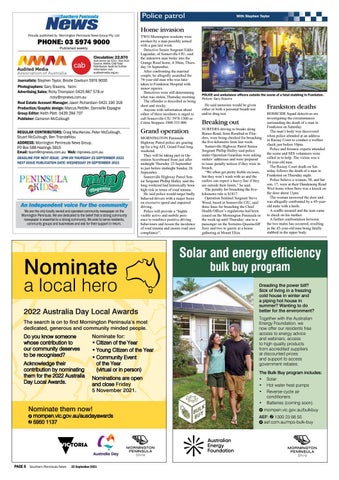 Police patrol Home invasion TWO Mornington residents were awoken by a man possibly armed with a gun last week. Detective Senior Sergeant Eddie Lagonder, of Somerville CIU, said the unknown man broke into the Grange Road home, 4.50am, Thursday 16 September. After confronting the married couple, he allegedly assaulted the 74-year-old man who was later taken to Frankston Hospital with minor injuries. Detectives were still determining what was stolen, Thursday morning. The offender is described as being short and stocky. Anyone with information about either of these incidents is urged to call Somerville CIU 5978 1300 or Crime Stoppers 1800 333 000.

2022 Australia Day Local Awards The search is on to find Mornington Peninsula’s most dedicated, generous and community minded people.

Do you know someone whose contribution to our community deserves to be recognised? Acknowledge their contribution by nominating them for the 2022 Australia Day Local Awards.

POLICE and ambulance officers outside the scene of a fatal stabbing in Frankston. Picture: Gary Sissons

He said motorists would be given either or both a personal breath test and/or drug test.

Breaking out SURFERS driving to breaks along Boneo Road, from Rosebud to Flinders, were being checked for breaching the five-kilometre limit last week. Somerville Highway Patrol Senior Sergeant Phillip Hulley said police under Operation Guardian were asking surfers’ addresses and were prepared to issue penalty notices if they were in breach. “We often get pretty feeble excuses, but they won’t wash with us and the surfers can expect a heavy fine if they are outside their limits,” he said. The penalty for breaching the fivekilometre rule is $1817. Operation Sentinel Sergeant Steve Wood, based at Somerville CIU, said three fines for breaching the Chief Health Officer’s regulations had been issued on the Mornington Peninsula in the week up until Thursday: one to a passenger on the Sorrento-Queenscliff ferry and two to guests at a house gathering at Mount Eliza.

HOMICIDE Squad detectives are investigating the circumstances surrounding the death of a man in Frankston on Saturday. The man’s body was discovered when police attended at an address in Rassay Court to conduct a welfare check just before 10pm. Police and forensic experts attended the scene and SES volunteers were called in to help. The victim was a 34-year-old man. The Rassay Court death on Saturday follows the death of a man in Frankston on Thursday night. Police believe a woman, 58, and her son, 17, were at their Dandenong Road West home when there was a knock on the door about 11pm. The woman answered the door and was allegedly confronted by a 45-yearold male with a knife. A scuffle ensured and the teen came to check on his mother. A further confrontation between the two males has occurred, resulting in the 45-year-old man being fatally stabbed in the upper body.

Dreading the power bill? Sick of living in a freezing cold house in winter and a piping hot house in summer? Wanting to do better for the environment? Together with the Australian Energy Foundation, we now offer our residents free access to energy advice and webinars, access to high quality products from accredited suppliers at discounted prices and support to access government rebates. The Bulk Buy program includes: • Solar • Hot water heat pumps • Reverse-cycle air conditioners • Batteries (coming soon). mornpen.vic.gov.au/bulkbuy AEF: 1300 23 68 55 aef.com.au/mps-bulk-buy