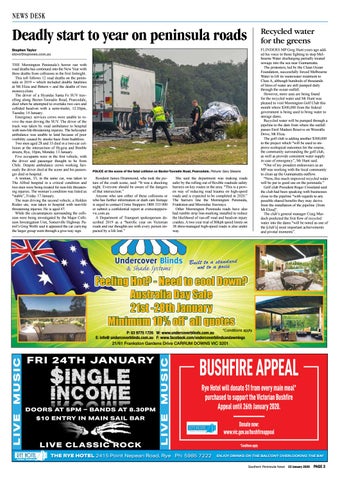 Recycled water for the greens

FLINDERS MP Greg Hunt years ago added his voice to those fighting to stop Melbourne Water discharging partially treated sewage into the sea near Gunnamatta. The protesters, led by the Clean Ocean Foundation, successfully forced Melbourne Water to lift its wastewater treatment to Class A, although hundreds of thousands of litres of water are still pumped daily through the ocean outfall. However, more uses are being found for the recycled water and Mr Hunt was pleased to visit Mornington Golf Club this month where $300,000 from the federal government is being used to bring water to storage dams. Recycled water will be pumped through a pipeline to the dam from where the outfall passes Emil Madsen Reserve on Wooralla Drive, Mt Eliza. The golf club is adding another $300,000 to the project which “will be used to improve ecological outcomes for the course, the community surrounding the golf club, as well as provide consistent water supply in case of emergency”, Mr Hunt said. “One of my proudest endeavours as an MP was working with the local community to clean up the Gunnamatta outflow. “Now, this much improved recycled water will be put to good use on the peninsula.” Golf club President Roger Crossland said the club had been speaking with businesses close to the pipeline “with regards to any possible shared benefits they may derive from the installation of the pipeline {from Mt Eliza]”. The club’s general manager Craig Murdoch predicted the first flow of recycled water into the dams “will be noted as one of the [club’s] most important achievements and pivotal moments”.

THE Mornington Peninsula’s horror run with road deaths has continued into the New Year with three deaths from collisions in the first fortnight. This toll follows 12 road deaths on the peninsula in 2019 – which included double fatalities at Mt Eliza and Bittern – and the deaths of two motorcyclists. The driver of a Hyundai Santa Fe SUV travelling along Baxter-Tooradin Road, Pearcedale, died when he attempted to overtake two cars and collided head-on with a semi-trailer, 12.20pm, Tuesday 14 January. Emergency services crews were unable to revive the man driving the SUV. The driver of the truck was taken by road ambulance to hospital with non-life-threatening injuries. The helicopter ambulance was unable to land because of poor visibility caused by smoke haze from bushfires. Two men aged 28 and 33 died in a two-car collision at the intersection of Hygeia and Bimble streets, Rye, 10pm, Monday 13 January. Five occupants were in the first vehicle, with the driver and passenger thought to be from Chile. Despite ambulance crews working furiously the driver died at the scene and his passenger died in hospital. A woman, 33, in the same car, was taken to The Alfred hospital in a critical condition and two men were being treated for non-life threatening injuries. The woman’s condition was listed as “stable”, Friday 17 January. The man driving the second vehicle, a Holden Rodeo ute, was taken to hospital with non-life threatening injuries. He is aged 47. While the circumstances surrounding the collision were being investigated by the Major Collision Investigation Unit, Somerville Highway Patrol’s Greg Wolfe said it appeared the car carrying the larger group went through a give-way sign.

POLICE at the scene of the fatal collision on Baxter-Tooradin Road, Pearcedale. Picture: Gary Sissons

Resident James Drummond, who took the picture of the crash scene, said: “It was a shocking night. Everyone should be aware of the dangers of that intersection.” Anyone who saw either of these collisions or who has further information or dash cam footage is urged to contact Crime Stoppers 1800 333 000 or submit a confidential report at crimestoppersvic.com.au A Department of Transport spokesperson described 2019 as a “horrific year on Victorian roads and our thoughts are with every person impacted by a life lost.”

She said the department was making roads safer by the rolling out of flexible roadside safety barriers on key routes in the area. “This is a proven way of reducing road trauma on high-speed roads and is expected to be completed in 2020.” The barriers line the Mornington Peninsula, Frankston and Mooroduc freeways. Other Mornington Peninsula roads have also had rumble strip line-marking installed to reduce the likelihood of run-off road and head-on injury crashes. A two year trial of 80kph speed limits on 38 shire-managed high-speed roads is also under way.

Rye Hotel will donate $1 from every main meal* purchased to support the Victorian Bushfire Appeal until 26th January 2020.