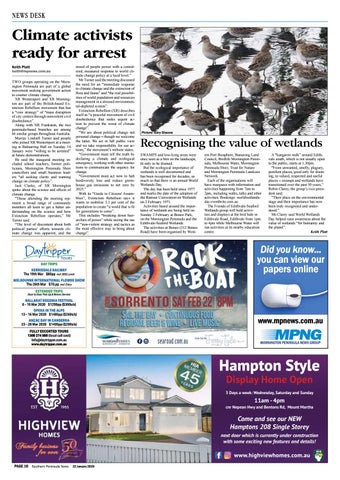 Climate activists ready for arrest mood of people power with a considered, measured response to world climate change policy at a local level.” Mr Turner said the meeting discussed the need for an “immediate response to climate change and the extinction of flora and fauna” and “the real possibilities of world population and resources management in a stressed environmental-depleted system”. Extinction Rebellion (XR) describes itself as “a peaceful movement of civil disobedience that seeks urgent action to prevent the worst of climate change”. “We are about political change not personal change – though we welcome the latter. We act in full public view and we take responsibility for our actions,” the movement’s website states. “Government must tell the truth by declaring a climate and ecological emergency, working with other institutions to communicate the urgency for change. “Government must act now to halt biodiversity loss and reduce greenhouse gas emissions to net zero by 2025.” With its “Guide to Citizens' Assemblies”, Extinction Rebellion says it wants to mobilise 3.5 per cent of the population to create “a world that is fit for generations to come”. This includes “breaking down hierarchies of power” while seeing the use of “non-violent strategy and tactics as the most effective way to bring about change”.

Keith Platt keith@mpnews.com.au TWO groups operating on the Mornington Peninsula are part of a global movement seeking government action to counter climate change. XR Westernport and XR Mornington are part of the British-based Extinction Rebellion movement that has a “core strategy” of “mass disruption of city centres through nonviolent civil disobedience”. Along with XR Frankston, the two peninsula-based branches are among 66 similar groups throughout Australia. Murray Lindsell Turner said people who joined XR Westernport at a meeting in Balnarring Hall on Tuesday 14 January were “willing to be arrested” at future demonstrations. He said the inaugural meeting included school teachers, former politicians, Mornington Peninsula Shire councillors and small business leaders “all seeking clarity and wanting change on climate policy”. Jack Clarke, of XR Mornington spoke about the science and effects of climate change. “Those attending the meeting represent a broad range of community members all keen to get a better understanding on the science and how Extinction Rebellion operates,” Mr Turner said. “The level of discontent about both political parties’ efforts towards climate change was apparent, and the

Recognising the value of wetlands SWAMPS and low-lying areas were once seen as a blot on the landscape, fit only to be drained. But the ecological importance of wetlands is well documented and has been recognised for decades, so much so that there is an annual World Wetlands Day. The day has been held since 1977 and marks the date of the adoption of the Ramsar Convention on Wetlands on 2 February 1971. Activities based around the importance of wetlands are being held on Sunday 2 February at Boneo Park, on the Mornington Peninsula and the Edithvale-Seaford Wetlands. The activities at Boneo (312 Boneo Road) have been organised by West-

A “kangaroo walk” around Edithvale south, which is not usually open to the public, starts at 1.30pm. “From unwanted, smelly, plaguey, pestilent places, good only for draining, to valued, respected and useful places – swamps and wetlands have transitioned over the past 50 years,” Robin Clarey, the group’s vice-president said. “Their place on the environmental stage and their importance has now been truly recognised and understood.” Ms Clarey said World Wetlands Day helped raise awareness about the value of wetlands “for humanity and the planet”. Keith Platt

Come and see our NEW Hamptons 208 Single Storey next door which is currently under construction with some exciting new features and details!

Family business for over PAGE 10