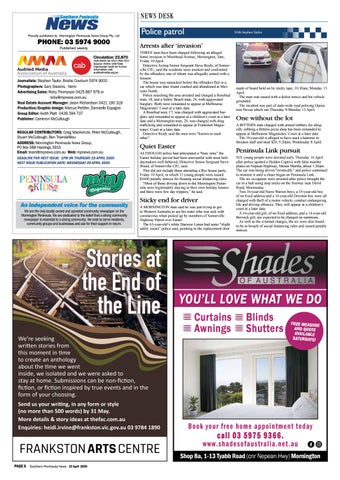 Arrests after ‘invasion’ THREE men have been charged following an alleged home invasion in Moorhead Avenue, Mornington, 3am, Friday 10 April. Detective Acting Senior Sergeant Steve Reidy, of Somerville CIU, said the residents were awoken and confronted by the offenders, one of whom was allegedly armed with a firearm. The house was ransacked before the offenders fled in a car which was later found crashed and abandoned at Merricks North. Police searching the area arrested and charged a Rosebud man, 18, and a Safety Beach man, 24, with aggravated burglary. Both were remanded to appear at Melbourne Magistrates’ Court at a later date. A Rosebud teen, 17, was charged with aggravated burglary and remanded to appear at a children’s court at a later date and a Mornington man, 20, was charged with drug trafficking and remanded to appear at Frankston Magistrates’ Court at a later date. Detective Reidy said the men were “known to each other”.

Quiet Easter ALTHOUGH police had anticipated a “busy time” the Easter holiday period had been uneventful with most holidaymakers well behaved, Detective Senior Sergeant Steve Wood, of Somerville CIU, said. This did not include those attending a Rye house party, Friday 10 April, in which 11 young people were issued $1600 penalty notices for flouting social distancing rules. “Most of those driving down to the Mornington Peninsula were legitimately staying in their own holiday houses and there were few day trippers,” he said.

Sticky end for driver A MORNINGTON man said he was just trying to get to Western Australia to see his sister who was sick with coronavirus when picked up by members of Somerville Highway Patrol over Easter. The 63-year-old’s white Daewoo Lanos had some “slight safety issues” police said, pointing to the replacement door

made of board held on by sticky tape, 10.30am, Monday 13 April. The man was issued with a defect notice and his vehicle grounded. The incident was part of state-wide road policing Operation Nexus which ran Thursday 9-Monday 13 April.

One without the lot A BITTERN man charged with armed robbery for allegedly robbing a Bittern pizza shop has been remanded to appear at Melbourne Magistrates’ Court at a later date. The 19-year-old is alleged to have used a hammer to threaten staff and steal $20, 9.20pm, Wednesday 8 April.

Peninsula Link pursuit SIX young people were arrested early Thursday 16 April after police spotted a Holden Captiva with false number plates on Nepean Highway, Mount Martha, about 1.20am. The car was being driven “erratically” and police continued to monitor it until a chase began on Peninsula Link. The six occupants were arrested after police brought the car to a halt using stop sticks on the freeway near Derril Road, Moorooduc. Two 16-year-old Narre Warren boys, a 15-year-old boy of no fixed address and a 14-year-old Doveton boy were all charged with theft of a motor vehicle, conduct endangering life and driving offences. They will appear at a children’s court at a later date. A 16-year-old girl, of no fixed address, and a 14-year-old Berwick girl, are expected to be charged on summons. As well as the criminal charges, the six were also found to be in breach of social distancing rules and issued penalty notices.