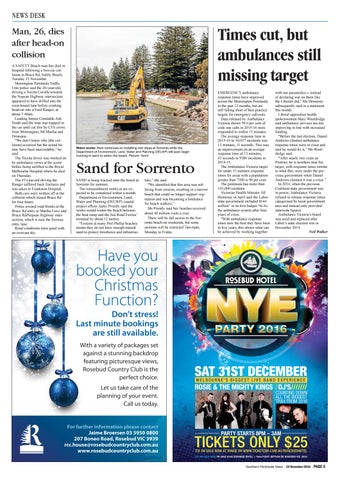 Man, 26, dies after head-on collision A SAFETY Beach man has died in hospital following a two-car collision in Bruce Rd, Safety Beach, Tuesday 15 November. Mornington Peninsula Traffic Unit police said the 26-year-old, driving a Toyota Corolla towards the Nepean Highway intersection appeared to have drifted into the west-bound lane before crashing head-on into a Ford Ranger, at about 7.40am. Leading Senior Constable Ash South said the man was trapped in the car until cut free by CFA crews from Mornington, Mt Martha and Dromana. “We don’t know why [the collision] occurred but the actual hit may have been unavoidable,” he said. The Toyota driver was worked on by ambulance crews at the scene before being airlifted to the Royal Melbourne Hospital where he died on Thursday. The 47-year-old driving the Ranger suffered back fractures and was taken to Frankston Hospital. Both cars were written off in the collision which closed Bruce Rd for four hours. Police erected road blocks at the Bruce Rd entry to Martha Cove and Bruce Rd/Nepean Highway intersection, which is near the freeway entry lane. Road conditions were good with an overcast sky.

Water works: Work continues on installing new steps at Sorrento while the Department of Environment, Land, Water and Planning (DELWP) will soon begin trucking in sand to widen the beach. Picture: Yanni

Sand for Sorrento SAND is being trucked onto the beach at Sorrento for summer. The renourishment works at are expected to be completed within a month. Department of Environment, Land, Water and Planning (DELWP) coastal project officer Jacky Priestly said the works would widen the beach between the boat ramp and the Sea Road Ferries’ terminal by about 12 metres. “Erosion at many Port Phillip beaches means they do not have enough natural sand to protect foreshores and infrastruc-

ture,” she said. “We identified that this area was suffering from erosion, resulting in a narrow beach that could no longer support vegetation and was becoming a hindrance for beach walkers.” Ms Priestly said bay beaches received about 40 million visits a year. There will be full access to the Sorrento beach on weekends, but some sections will be restricted 7am-6pm, Monday to Friday.

EMERGENCY ambulance response times have improved across the Mornington Peninsula in the past 12 months, but are still falling short of best practice targets for emergency call-outs. Data released by Ambulance Victoria shows 70.6 per cent of code one calls in 2015-16 were responded to within 15 minutes. The average response time in 2015-16 to 10,057 incidents was 13 minutes, 11 seconds. This was an improvement on an average response time of 13 minutes, 43 seconds to 9380 incidents in 2014-15. The Ambulance Victoria target for under 15 minutes response times for areas with a population greater than 7500 is 90 per cent. The peninsula has more than 145,000 residents. Victorian Health Minister Jill Hennessy in April said the Labor state government included $144 million” in its first budget “to fix the ambulance system after four years of crisis. “With ambulance response times now the best they have been in five years, this shows what can be achieved by working together

with our paramedics – instead of declaring war on them like the Liberals did,” Ms Hennessy subsequently said in a statement this month. Liberal opposition health spokeswoman Mary Wooldridge said ambulance services are not improving in line with increased funding. “Before the last election, Daniel Andrews claimed ambulance response times were in crisis and said he would fix it,” Ms Wooldridge said. “After nearly two years as Premier, he is nowhere near his target, with response times similar to what they were under the previous government when Daniel Andrews claimed it was a crisis.” In 2014, when the previous Coalition state government was in power, Ambulance Victoria refused to release response times categorised by local government area and instead only provided statewide figures. Ambulance Victoria’s board was axed and replaced after Labor’s state election win in November 2014. Neil Walker