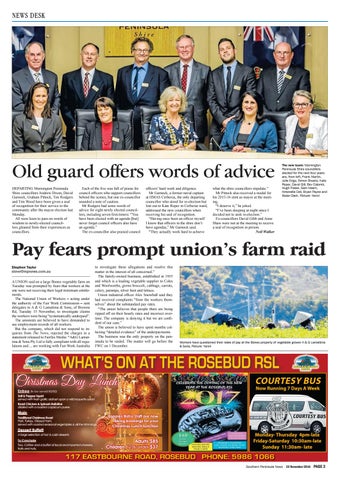 Old guard offers words of advice DEPARTING Mornington Peninsula Shire councillors Andrew Dixon, David Garnock, Graham Pittock, Tim Rodgers and Tim Wood have been given a seal of recognition for their service to the community after the mayor election last Monday. All were keen to pass on words of wisdom to newly-elected councillors gleaned from their experiences as councillors.

officers’ hard work and diligence. Mr Garnock, a former naval captain at HMAS Cerberus, the only departing councillor who stood for re-election but lost out to Kate Roper in Cerberus ward, addressed the new councillors when receiving his seal of recognition. “Having once been an officer myself I know that officers in the shire don’t have agendas,” Mr Garnock said. “They actually work hard to achieve

what the shire councillors stipulate.” Mr Pittock also received a medal for his 2015-16 stint as mayor at the meeting. “I deserve it,” he joked. “I’ve been sleeping at night since I decided not to seek re-election.” Ex-councillors David Gibb and Anne Shaw were not at the meeting to receive a seal of recognition in person. Neil Walker

Pay fears prompt union’s farm raid Stephen Taylor steve@mpnews.com.au A UNION raid on a large Boneo vegetable farm on Tuesday was prompted by fears that workers at the site were not receiving their legal minimum entitlements. The National Union of Workers – acting under the authority of the Fair Work Commission – sent delegates to A & G Lamattina & Sons, of Browns Rd, Tuesday 15 November, to investigate claims the workers were being “systematically underpaid”. The unionists are believed to have demanded to see employment records of all workers. But the company, which did not respond to inquiries from The News, rejected the charges in a statement released to Fairfax Media: “A&G Lamattina & Sons Pty Ltd is fully compliant with all regulations and ... are working with Fair Work Australia

to investigate these allegations and resolve this matter in the interest of all concerned.” The family-owned business, established in 1955 and which is a leading vegetable supplier to Coles and Woolworths, grows broccoli, cabbage, carrots, celery, parsnips, silver beet and lettuce. Union industrial officer Alex Snowball said they had received complaints “from the workers themselves” about the substandard pay rates. “The union believes that people there are being ripped off on their hourly rates and incorrect overtime. The company is denying it but we are confident of our case.” The union is believed to have spent months collecting “detailed evidence” of the underpayments. The business was the only property on the peninsula to be raided. The matter will go before the FWC on 1 December.

Workers have questioned their rates of pay at the Boneo property of vegetable grower A & G Lamattina & Sons, Picture: Yanni

A large selection of hot & cold desserts To Conclude Tea, Coffee and a buffet of local and imported cheeses, fruits and nuts.