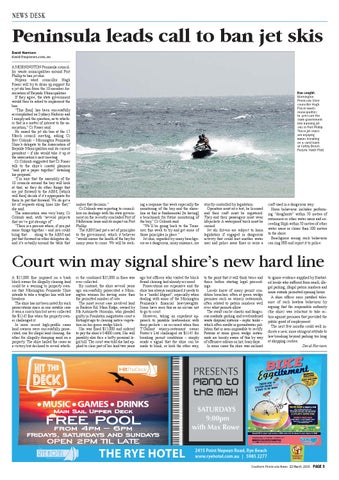 Peninsula leads call to ban jet skis David Harrison david@mpnews.com.au A MORNINGTON Peninsula councillor wants municipalities around Port Phillip to ban jet skis. Nepean ward councillor Hugh Fraser will try to drum up support for a jet ski ban from the 10-member Association of Bayside Municipalities. If they agree, the state government would then be asked to implement the ban. “This [ban] has been successfully accomplished on Sydney Harbour and I simply ask the question, as to whether that is a matter of interest to the association,” Cr Fraser said. He raised the jet ski ban at the 15 March council meeting, asking Cr Bev Colomb – Mornington Peninsula Shire’s delegate to the Association of Bayside Municipalities and its current president – if she would take it up at the association’s next meeting. Cr Colomb suggested that Cr Fraser talk to the shire’s coastal planners “and put a paper together” detailing his proposal. “I’m sure that the assembly of the 10 councils around the bay will look at that, as they do other things that are put forward to the ABM, [which will then] decide if it’s appropriate for them to put that forward. We do get a lot of requests along lines like that,” she said. The association was very busy, Cr Colomb said, with “several projects that we’ve got steerage of”. “There is a process where, if you put some things together – and you could bring that … along to the ABM and put that forward as other delegates do; and it’s actually around the table that

makes that decision.” Cr Colomb was reporting to councillors on dealings with the state government on the recently concluded Port of Melbourne lease and its impact on Port Phillip. The ABM had put a set of principles to the government, which it believes “would ensure the health of the bay for many years to come. We will be seek-

ing a response this week especially the monitoring of the bay and the shoreline as this is fundamental [to having] a benchmark for future monitoring of the bay,” Cr Colomb said. “We’ll be going back to the Treasurer this week to try and get some of those principles in place.” Jet skis, regarded by many beachgoers as a dangerous, noisy nuisance, are

strictly controlled by legislation. Operators must sit a test, be licensed and their craft must be registered. They and their passengers must wear lifejackets. A waterproof torch must be carried. Jet ski drivers are subject to hoon legislation if engaged in dangerous activity that could hurt another water user and police issue fines or seize a

Court win may signal shire’s new hard line A $15,000 fine imposed on a bush block owner for illegally clearing land could be a warning to property owners that Mornington Peninsula Shire intends to take a tougher line with law breakers. The shire has not been noted for such prosecutions since in one notable case it won a conviction but never collected the $1145 fine when the property owner challenged it. In more recent high-profile cases land owners were successfully prosecuted, one for illegal land clearing, the other for illegally dumping sand on a property. The shire hailed the cases as a victory but declined to reveal wheth-

er the combined $35,000 in fines was ever collected. By contrast, the shire several years ago successfully prosecuted a Mornington woman for having more than the permitted number of cats. The most recent case involved land in Barkers Rd, Main Ridge, owned by Ms Antoinette Noronho, who pleaded guilty in Frankston magistrates court a fortnight ago to clearing native vegetation on her green wedge block. She was fined $15,000 and ordered to pay the shire’s S4000 costs, She will possibly also face a hefty personal legal bill. The court was told she had applied to clear part of her land two years

ago but officers who visited the block found clearing had already occurred. Prosecutions are expensive and the shire has always maintained it needs to be a “model litigant”, especially when dealing with some of the Mornington Peninsula’s financial heavyweights. Some have seen this as an excuse not to go to court. However, taking an expedient approach to possible lawbreakers with deep pockets – as occurred when then T’Gallant winery-restaurant owner Foster’s Ltd challenged its $1145 for breaking permit conditions – simply sends a signal that the shire can be made to blink, or look the other way,

to the point that it will think twice and thrice before starting legal proceedings. Locals know of many permit condition breaches, often at green wedge premises such as winery restaurants, often related to patron numbers well over what permits allow. The result can be chaotic and dangerous roadside parking and overburdened waste disposal systems – septic tanks – which often results in groundwater pollution that is near-impossible to rectify. Patrons at some green wedge restaurants are keenly aware of this by way of offensive odours on hot, busy days. In some cases the shire was inclined

to ignore evidence supplied by frustrated locals who suffered from smell, illegal parking, illegal patron numbers and noise outside permitted opening hours. A shire officer once justified tolerance of such lawless behaviour by arguing that the responsible authority (the shire) was reluctant to take action against premises that provided the public good of employment. The next few months could well indicate a new, more stringent attitude to law breaking beyond parking too long at shopping centres. David Harrison