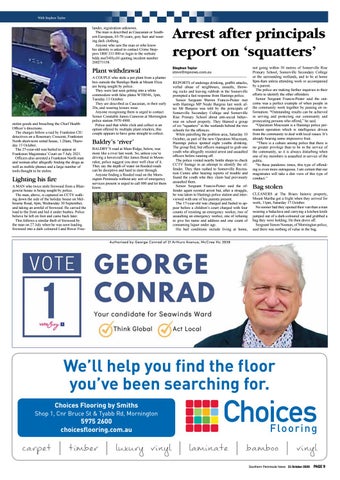 stolen goods and breaching the Chief Health Officer’s directions. The charges follow a raid by Frankston CIU detectives on a Rosemary Crescent, Frankston North short-term rental house, 1.20am, Thursday 15 October. The 27-year-old was bailed to appear at Frankston Magistrates’ Court on 7 July 2021. Officers also arrested a Frankston North man and woman after allegedly finding the drugs as well as mobile phones and a large number of tools thought to be stolen.

Lighting his fire A MAN who twice stole firewood from a Blairgowrie house is being sought by police. The man, above, is captured on CCTV walking down the side of the holiday house on Melbourne Road, 4pm, Wednesday 30 September, and taking an armful of firewood. He carried the load to the front and hid it under bushes. Police believe he left on foot and came back later. This follows a similar theft of firewood by the man on 27 July when he was seen loading firewood into a dark coloured Land Rover Free-

lander, registration unknown. The man is described as Caucasian or Southern European, 65-70 years, grey hair and wearing dark clothing. Anyone who saw the man or who know his identity is asked to contact Crime Stoppers 1800 333 000 or login to the website bddy.me/34HycI4 quoting incident number 200271158.

Arrest after principals report on ‘squatters’

A COUPLE who stole a pot plant from a planter box outside the Bendigo Bank at Mount Eliza are being sought by police. They were last seen getting into a white commodore with false plates WTB546, 1pm, Tuesday 13 October. They are described as Caucasian, in their early 20s, and wearing leisure wear. Anyone recognising them is urged to contact Senior Constable James Cameron at Mornington police station 5970 4900. Police said that while click and collect is an option offered by multiple plant retailers, this couple appears to have gone straight to collect.

Baldry’s ‘river’ BALDRY’S road at Main Ridge, below, was more like a river last week. So, unless you’re driving a hovercraft like James Bond in Moonraker, police suggest you steer well clear of it. They say the depth of water on flooded roads can be deceptive and hard to steer through. Anyone finding a flooded road on the Mornington Peninsula without any sort of emergency services present is urged to call 000 and let them know.

REPORTS of underage drinking, graffiti attacks, verbal abuse of neighbours, assaults, throwing rocks and leaving rubbish in the Somerville prompted a fast response from Hastings police. Senior Sergeant Warren Francis-Pester met with Hastings MP Neale Burgess last week after Mr Burgess was told by the principals of Somerville Secondary College and Somerville Rise Primary School about anti-social behaviour on school property. They blamed a group of six “squatters” in the wetlands behind the two schools for the offences. While patrolling the problem area, Saturday 10 October, as part of the new Operation Miscreant, Hastings police spotted eight youths drinking. The group fled, but officers managed to grab one youth who allegedly resisted arrest and assaulted officers before running off. The police visited nearby bottle shops to check CCTV footage in an attempt to identify the offender. They then rushed to Somerville Recreation Centre after hearing reports of trouble and found the youth who they claim had previously assaulted them. Senior Sergeant Francis-Pester said the offender again resisted arrest but, after a struggle, he was taken to Hastings police station and interviewed with one of his parents present. The 17-year-old was charged and bailed to appear before a children’s court charged with four counts of resisting an emergency worker, two of assaulting an emergency worker, one of refusing to give his name and address and one count of consuming liquor under age. His bail conditions include living at home,

not going within 50 metres of Somerville Rise Primary School, Somerville Secondary College or the surrounding wetlands, and to be at home 8pm-8am unless attending work or accompanied by a parent. The police are making further inquiries in their efforts to identify the other offenders. Senior Sergeant Francis-Pester said the outcome was a perfect example of when people in the community work together by passing on information. “Outstanding results can be achieved in serving and protecting our community and prosecuting persons who offend,” he said. “Operation Miscreant is a Hastings police permanent operation which is intelligence driven from the community to deal with local issues. It’s already bearing some impressive fruit. “There is a culture among police that there is no greater privilege than to be in the service of the community, so it is always disturbing when one of my members is assaulted in service of the public. “In these pandemic times, this type of offending is even more outrageous. I am certain that our magistrates will take a dim view of this type of conduct.”

Bag stolen CLEANERS at The Briars historic property, Mount Martha got a fright when they arrived for work, 11pm, Saturday 17 October. No sooner had they opened their van than a man wearing a balaclava and carrying a kitchen knife jumped out of a dark-coloured car and grabbed a bag they were holding. He then drove off. Sergeant Simon Noonan, of Mornington police, said there was nothing of value in the bag.