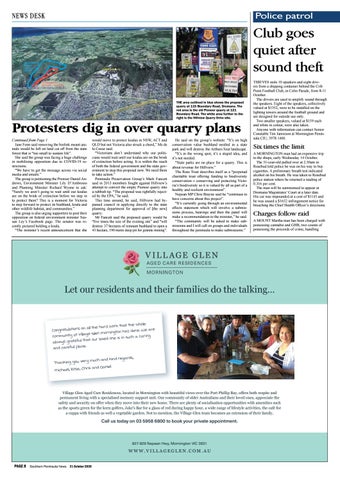 Club goes quiet after sound theft THE area outlined in blue shows the proposed quarry at 115 Boundary Road, Dromana. The red area is the old Pioneer quarry at 121 Boundary Road. The white area further to the right is the Hillview Quarry Drive site.

Protesters dig in over quarry plans Continued from Page 1 Jane Fenn said removing the biolink meant animals would be left on land cut off from the state forest that is “too small to sustain life”. She said the group was facing a huge challenge in mobilising opposition due to COVID-19 restrictions. “We have to get the message across via social media and emails.” The group is petitioning the Premier Daniel Andrews, Environment Minister Lily D’Ambrosio and Planning Minister Richard Wynne to ask: “Surely we aren’t going to wait until our koalas are on the brink of extinction before we step in to protect them? This is a moment for Victoria to step forward to protect its bushland, koala and other wildlife habitat, and communities.” The group is also urging supporters to post their opposition on federal environment minister Sussan Ley’s Facebook page. The senator was recently pictured holding a koala. “The minister’s recent announcement that she

would move to protect koalas in NSW, ACT and QLD but not Victoria also struck a chord,” Ms de la Coeur said. “Victorians don’t understand why our politicians would wait until our koalas are on the brink of extinction before acting. It is within the reach of both the federal government and the state government to stop this proposal now. We need them to take action.” Peninsula Preservation Group’s Mark Fancett said in 2013 members fought against Hillview’s attempt to convert the empty Pioneer quarry into a rubbish tip. “The proposal was rightfully rejected by the EPA,” he said. This time around, he said, Hillview had bypassed council in applying directly to the state planning department for approval of [the new] quarry. Mr Fancett said the proposed quarry would be “five times the size of the existing site” and “will destroy 37 hectares of remnant bushland to open a 43 hectare, 190 metre deep pit for granite mining”.

He said on the group’s website: “It’s on high conservation value bushland nestled in a state park and will destroy the Arthurs Seat landscape. “It’s in the wrong spot, it’s a stupid idea, and it’s not needed. “State parks are no place for a quarry. This is about revenue for Hillview.” The Ross Trust describes itself as a “perpetual charitable trust offering funding to biodiversity conservation – conserving and protecting Victoria’s biodiversity so it is valued by all as part of a healthy and resilient environment”. Nepean MP Chris Brayne said he “continues to have concerns about this project”. “It’s currently going through an environmental effects statement which will involve a submissions process, hearings and then the panel will make a recommendation to the minister,” he said. “The community will be asked to make submissions and I will call on groups and individuals throughout the peninsula to make submissions.”

THIEVES stole 10 speakers and eight drivers from a shipping container behind the Crib Point Football Club, in Colin Parade, from 8-11 October. The drivers are used to amplify sound through the speakers. Eight of the speakers, collectively valued at $1352, were to be installed on the lighting towers around the football ground and are designed for outside use only. Two smaller speakers, valued at $159 each and white in colour, were also taken. Anyone with information can contact Senior Constable Tim Jamieson at Mornington Peninsula CIU, 5978 1400.

Six times the limit A MORNINGTON man had an expensive trip to the shops, early Wednesday 14 October. The 31-year-old pulled over at 2.50am in Rosebud told police he was on his way to buy cigarettes. A preliminary breath test indicated alcohol on his breath. He was taken to Rosebud police station where he returned a reading of 0.316 per cent. The man will be summonsed to appear at Dromana Magistrates’ Court at a later date. His car was impounded at a cost of $1145 and he was issued a $1652 infringement notice for breaching the Chief Health Officer’s directions.

Charges follow raid A MOUNT Martha man has been charged with possessing cannabis and GHB, two counts of possessing the proceeds of crime, handling

Let our residents and their families do the talking…

the whole l the hard work that . We are Congratulations on al Mornington has done en Gl ge lla Vi at ity un comm ch a caring our loved one is in su always grateful that and careful place. s, uch and kind regard Thanking you very m and Daniel Michael, Rose, Chris

Village Glen Aged Care Residences, located in Mornington with beautiful views over the Port Phillip Bay, oﬀers both respite and permanent living with a specialised memory support unit. Our community of older Australians and their loved ones, appreciate the safety and security on oﬀer when they move into their new home. There are plenty of socialisation opportunities with amenities such as the sports green for the keen golfers, Jake’s Bar for a glass of red during happy hour, a wide range of lifestyle activities, the café for a cuppa with friends as well a vegetable garden. Not to mention, the Village Glen team becomes an extension of their family.