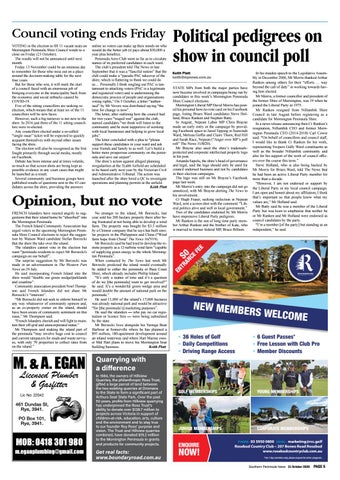 VOTING in the election to fill 11 vacant seats on Mornington Peninsula Shire Council winds to a close on Friday (23 October). The results will not be announced until next month. Friday 13 November could be an ominous day to remember for those who miss out on a place around the decision-making table for the next four years. But for those who win, it will mark the start of a council faced with an enormous job of bringing everyone in the municipality back from the economic and social setbacks caused by COVID-19. Five of the sitting councillors are seeking reelection, which means that at least six of the 11 councillors will be new faces. However, such a big turnover is not new to the shire. In 2016 just three of the 11 sitting councillors were re-elected. Any councillors elected under a so-called “single issue” ticket will be expected to quickly acquaint themselves with myriad other issues facing the shire. The election will also be recognised as the first fought primarily through social media, mostly on Facebook. Debate has been intense and at times volatile, so much so that screen shots are being kept as possible evidence in any court cases that might be launched as a result. Several community and business groups have published results of questions sent to the 43 candidates across the shire, providing the answers

online so voters can make up their minds on who would do the better job (it pays about $30,000 a year plus benefits). Peninsula Aero Club went so far as to circulate names of its preferred candidates in each ward. The club’s president told The News in late September that it was a “fanciful notion” that the club could make a “pseudo PAC takeover of the shire, which is flattering to think we could do so… Personally I think singling out PAC is tantamount to attacking voters (PAC is a legitimate and registered voter) and is undermining the democratic process of people and organisations voting rights,” On 5 October, a letter “authorised” by Mr Vevers was distributed saying “the time for change is now”. The letter, after outlining how the council had for two years “waged war” against the club, named candidates “we think will listen to the community and be most supportive of working with local businesses and helping to grow local jobs”. The letter concluded with a plea to “please support these candidates in your ward and ask your friends and family to as well. Let’s build a better more prosperous community on the peninsula and save our airport”. The shire’s action against alleged planning irregularities at the Tyabb Airfield are scheduled to be heard early next year by the Victorian Civil and Administrative Tribunal. The action was launched after the shire hired a QC to investigate operations and planning permits at the airfield. Keith Platt

Opinion, but no vote FRENCH Islanders have reacted angrily to suggestions that their island home be “absorbed” into the Mornington Peninsula. The French Island Community Association has urged voters in the upcoming Mornington Peninsula Shire Council elections to reject the suggestion by Watson Ward candidate Stefan Borzecki that the shire the take over the island. The islanders cannot vote in the election but want “peninsula residents to reject Mr Borzecki's campaign on our behalf”. The surprise suggestion by Mr Borzecki was made in an advertisement in The Western Port News on 29 July. He said incorporating French Island into the shire would “double our green wedge/parklands and coastline”. Community association president Noel Thompson said French Islanders did not share Mr Borzecki’s “interests”. “Mr Borzecki did not seek to inform himself in any way whatsoever of community opinion and, as an ex-property owner on the island, should have been aware of community sentiment on this issue,” Mr Thompson said. “French Islanders cherish and will fight to maintain their off-grid and unincorporated status.” Mr Thompson said making the island part of the peninsula “may involve huge cost to council and current ratepayers for roads and waste services, with only 70 properties to collect rates from on the island.”

No stranger to the island, Mr Borzecki, last year sold his 200 hectare property there after being frustrated at not being able to develop a wind farm. The property was bought for $3.5 million by a Chinese company that he says has built similar projects in the Philippines and China (“Wind farm hope from China” The News 16/7/19). Mr Borzecki said he had tried to develop the remote property as a 12-turbine wind farm “capable of supplying green energy to the whole Mornington Peninsula”. When contacted by The News last week Mr Borzecki predicted the island would eventually be added to either the peninsula or Bass Coast Shire, which already includes Phillip Island. “It’s only a matter of time and it’s a question of do we [the peninsula] want to get involved?” he said. It’s a wonderful green wedge area and would double the amount of national park on the peninsula.” He said 11,000 of the island’s 17,000 hectares was already national park and would be attractive “for [the peninsula’s] marketing purposes”. He said the islanders — who pay no car registration or licence fees — were being subsidised by the state. Mr Borzecki lives alongside his Yaringa Boat Harbour at Somerville where he has planned a $95 million, 180-apartment development around an inland waterway and where Hart Marine owner Mal Hart plans to move his Mornington boat building business. Keith Platt

Quarrying with a difference In 1984, the owners of Hillview Quarries, the philanthropic Ross Trust, gifted a large parcel of land between the two existing quarries at Dromana to the State to form a significant part of Arthurs Seat State Park. Over the past 50 years, profits from Hillview quarrying has underpinned the Ross Trust’s ability to donate over $138.7 million to projects across Victoria in support of children-at-risk, education, arts, culture and the environment and to stay true to our founder Roy Ross’ purpose and vision. The Trust and Hillview quarries combined, have donated $19.2 million to the Mornington Peninsula in grants and products for community projects.

Political pedigrees on show in council poll In his maiden speech to the Legislative Assembly in December 2006, Mr Morris thanked Arthur Ranken among others for their “efforts … way beyond the call of duty” in working towards having him elected. Mr Morris, a former councillor and president of the former Shire of Mornington, was 19 when he joined the Liberal Party in 1975. Mr Ranken resigned from Nillumbik Shire Council in late August before registering as a candidate for Mornington Peninsula Shire. In a news release announcing then Cr Ranken’s resignation, Nillumbik CEO and former Mornington Peninsula CEO (2014-2018) Carl Cowie said: “On behalf of councillors and council staff, I would like to thank Cr Ranken for his work, representing Swipers Gully Ward constituents as well as the broader Nillumbik community and also for his support of the work of council officers over the course this term.” Steve Holland, who is also being backed by Mr Morris for Briars Ward, told The News that he had been an active Liberal Party member for more than a decade. “However, I am not endorsed or support by the Liberal Party in my local council campaign. I am open and honest about my affiliation, I think that’s important so that people know what my values are,” Mr Holland said. Mr Batty said he was a member of the Liberal Party but was keen to emphasise that neither he or Mr Ranken and Mr Holland were endorsed as council candidates by the party. “I’m a member [of the party] but standing as an independent,” he said.

Keith Platt keith@mpnews.com.au STATE MPs from both the major parties have now become involved in campaigns being run by candidates in this week’s Mornington Peninsula Shire Council elections. Mornington Liberal MP David Morris has posted his personal how-to-vote card on his Facebook page, listing Briars Ward candidates Steve Holland, Bruce Ranken and Stephen Batty. In August, Nepean Labor MP Chris Brayne made an early entry in the campaign by providing Facebook space to Jared Tipping in Seawinds Ward, Melissa Goffin and Claire Thorn, Red Hill and Sarah Race, Nepean (“Anger over MP’s poll roll” The News 31/8/20). Mr Brayne also used the shire’s trademarkprotected and corporate intellectual property logo in his post. Amanda Sapolu, the shire’s head of governance and legal, said the logo should only be used for council endorsed business and not by candidates in their election campaigns. The logo was still on Mr Brayne’s Facebook page last week. Mr Morris’s entry into the campaign did not go unnoticed, with Mr Brayne alerting The News to his involvement. Cr Hugh Fraser, seeking reelection in Nepean Ward, sent a screen shot with the comment: “Liberal politics alive and well in local government.” Two of the candidates endorsed by Mr Morris have impressive Liberal Party pedigrees. Mr Ranken is the son of long time party member Arthur Ranken and the brother of Kate, who is married to former federal MP, Bruce Billson.