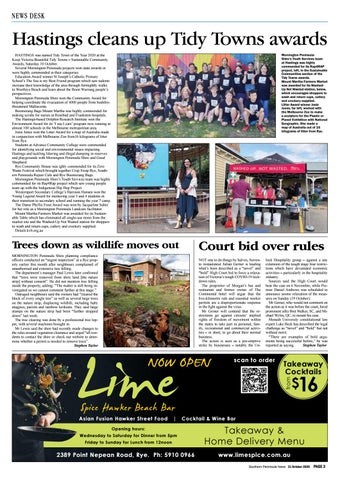 Hastings cleans up Tidy Towns awards HASTINGS was named Tidy Town of the Year 2020 at the Keep Victoria Beautiful Tidy Towns – Sustainable Community Awards, Saturday 10 October. Several Mornington Peninsula projects won state awards or were highly commended in their categories: Education Award winner St Joseph’s Catholic Primary School’s The Sea is my Best Friend program which saw tudents increase their knowledge of the area through fortnightly walks to Woolleys Beach and learn about the Boon Wurrung people’s perspectives. Mornington Peninsula Shire won the Community Award for helping coordinate the evacuation of 4000 people from bushfirethreatened Mallacoota. Boomerang Bags Mount Martha was highly commended for making scrubs for nurses at Rosebud and Frankston hospitals. The Hastings-based Dolphin Research Institute won the Environment Award for its ‘I sea I care’ program now running at almost 100 schools in the Melbourne metropolitan area. Josie Jones won the Litter Award for a map of Australia made in conjunction with Melbourne Zoo from16 kilograms of litter from Rye. Students at Advance Community College were commended for identifying social and environmental issues impacting Hastings and tackling littering and illegal dumping in reserves and playgrounds with Mornington Peninsula Shire and Good Shepherd. Rye Community House was ighly commended for its Zero Waste Festival which brought together Crop Swap Rye, Southern Peninsula Repair Cafe and Rye Boomerang Bags. Mornington Peninsula Shire’s Youth Services team was highly commended for its Rap4Rap project which saw young people team up with the Indigenous Hip Hop Project. Westernport Secondary College’s Harrison Hansen won the Young Legend Award for mentoring year 3 and 4 students in their transition to secondary school and running the year 7 camp. The Dame Phyllis Frost Award was won by Jacqueline Salter for her role as a Mornington Peninsula Landcare facilitator. Mount Martha Farmers Market was awarded for its Sustainable Table which has eliminated all single-use items from the market site and the Washed-Up Not Wasted station for shoppers to wash and return cups, cutlery and crockery supplied. Details kvb.org.au

Mornington Peninsula Shire’s Youth Services team at Hastings was highly commended for its Rap4RAP project, left, in the Sustainable Communities section of the Tidy Towns awards. Mount Martha Farmers Market was awarded for its WashedUp Not Wasted station, below, which encourages shoppers to wash and return cups, cutlery and crockery supplied. Litter Award winner Josie Jones, far left, worked with the Melbourne Zoo to make a sculpture for the Plastic or Planet Exhibition with National Geographic. She made a map of Australia out of 16 kilograms of litter from Rye.

Trees down as wildlife moves out MORNINGTON Peninsula Shire planning compliance officers conducted an “urgent inspection” at a Rye property earlier this month after neighbours complained of unauthorised and extensive tree felling. The department’s manager Paul Lewis later confirmed that “trees were removed from shire land [the nature strip] without consent”. He did not mention tree felling inside the property, adding: “The matter is still being investigated so we cannot comment further at this stage.” Outraged neighbours said the owners had “cleared the block of every single tree” as well as several large trees on the nature strip, displacing wildlife, including baby magpies, parrots and rainbow lorikeets. They said large stumps on the nature strip had been “further stripped down” last week. The tree clearing was done by a professional tree lopper, with several machines brought in. Mr Lewis said the shire had recently made changes to the rules around vegetation clearance and urged “all residents to contact the shire or check our website to determine whether a permit is needed to remove trees”. Stephen Taylor

NOT one to do things by halves, Sorrento restaurateur Julian Gerner is leading what’s been described as a “novel” and “bold” High Court bid to force a relaxation of Victoria’s tough COVID-19 lockdown rules. The proprietor of Morgan’s bar and restaurant and former owner of The Continental hotel will argue that the five-kilometre rule and essential worker permits are a disproportionate response in the fight against the virus. Mr Gerner will contend that the restrictions go against citizens’ implied rights of freedom of movement within the states to take part in personal, family, recreational and commercial activities – in short, to go about their normal business. The action is seen as a pre-emptive strike by businesses – notably the Un-

lock Hospitality group – against a any extension of the tough stage four restrictions which have devastated economic activities – particularly in the hospitality industry. Sources said the High Court would hear the case on 6 November, while Premier Daniel Andrews was scheduled to announce seome relaxation of the measures on Sunday (19 October). Mr Gerner, who would not comment on the action as it was before the court, hired prominent silks Bret Walker, SC, and Michael Wyles, QC, to mount his case. Monash University constitutional law expert Luke Beck has described the legal challenge as “novel” and “bold” but not without merit. “There are examples of bold arguments being successful before,” he was reported as saying. Stephen Taylor

Opening hours: Wednesday to Saturday for Dinner from 5pm Friday to Sunday for Lunch from 12noon