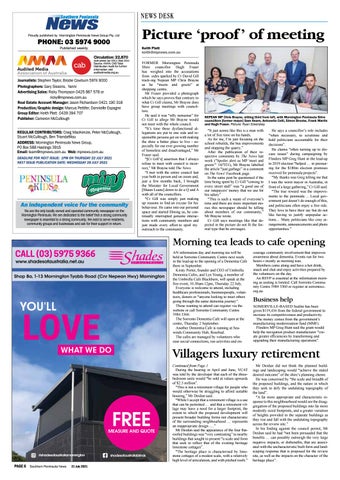 Picture ‘proof ’ of meeting Keith Platt keith@mpnews.com.au FORMER Mornington Peninsula Shire councillor Hugh Fraser has weighed into the accusations from sides sparked by Cr David Gill track-ing Nepean MP Chris Brayne as he “meets and greets” at shopping centre. Mr Fraser provided a photograph which he says proves that contrary to what Cr Gill claims, Mr Brayne does have group meetings with councillors. He said it was “silly nonsense” for Cr Gill to allege Mr Brayne would not meet with the whole council. “It’s time these dysfunctional allegations are put to one side and responsible persons get on with making the shire a better place to live - especially for our ever growing number of homeless and disadvantaged,” Mr Fraser said. “[Cr Gill’s] assertion that I always refuse to meet with council is incorrect,” Mr Brayne told The News. “I met with the entire council last year both in person and on zoom and, just a few months back, I brought the Minister for Local Government [Shaun Leane] down to do a Q and A with all of the councillors. “Cr Gill was simply just making up reasons to find an excuse for his behaviour. He came into our personal space and started filming us, he continually interrupted genuine interactions with community members and just made every effort to spoil my outreach to the community.

“It just seems like this is a man with a lot of free time on his hands. As for me, I’m just focusing on the school rebuilds, the bus improvements and stopping the quarry.” After the publication of their respective comments by The News last week (&quot;Spoiler alert as MP &#39;meet and greets’&quot; 14/7/21), Mr Brayne labelled the article “just garbage” in a comment on The News’ Facebook page. In the same post he questioned if the time being spent by Cr Gill “coming to every street stall” was “a good use of our ratepayers’ money that we use for his salary” “This is such a waste of everyone’s time and there are more important stories this newspaper should be telling about members of our community,” Mr Brayne wrote. Cr Gill says meetings like that depicted in the picture do not fit the formal type that he envisages.

He says a councillor’s role includes “when necessary, to scrutinise and hold politicians accountable for their decisions”. He claims “often turning up to discuss issues” during campaigning by Flinders MP Greg Hunt in the lead-up to 2019 election “helped … in pressuring for the $180m election promises received for peninsula projects”. “My thanks was Greg telling me that I was the worst mayor in Australia, in front of a large gathering,” Cr Gill said. “The true reward was the improvements to the peninsula ... Local government just doesn’t do enough of this, and politicians often enjoy a free ride. They love to have their say but do not like having to justify unpopular actions… Many politicians like cosy arrangements, announcements and photo opportunities.”

Morning tea leads to cafe opening AN information day and morning tea will be held at Sorrento Community Centre next week in the lead-up to the opening of a Dementia Cafe there in September. Kirsty Porter, founder and CEO of Umbrella Dementia Cafes, and Lyn Young, a member of the Umbrella Cafe Blackburn, will speak at the free event, 10.30am-12pm, Thursday 22 July. Everyone is welcome to attend, including healthcare professionals, businesspeople, volunteers, donors or “anyone looking to meet others going through the same dementia journey”. Those wanting to attend can register via the website or call Sorrento Community Centre 5984 3360. The Sorrento Dementia Cafe will open at the centre, Thursday 2 September. Another Dementia Cafe is running at Seawinds Community Hub, Rosebud. The cafes are managed by volunteers who ease social connections, run activities and en-

courage community involvement that improves awareness about dementia. Events run for two hours – mostly as morning teas. Members come along and have a hot drink, snack and chat and enjoy activities prepared by the volunteers on the day. An RSVP is essential at the information morning as seating is limited. Call Sorrento Community Centre 5984 3360 or register at sorrentocc. org.au

Business help SOMERVILLE-BASED Sealite has been given $119,456 from the federal government to increase its competitiveness and productivity. The money comes from the government’s manufacturing modernisation fund (MMF). Flinders MP Greg Hunt said the grant would help the navigation product manufacturer “create greater efficiencies by transforming and upgrading their manufacturing operations”.

Villagers luxury retirement Continued from Page 1 During the hearing in April and June, VCAT was told by the developer that each of the threebedroom units would “be sold at values upwards of $2.5 million”. “This is not a retirement village for people who would otherwise be struggling to afford suitable housing,” Mr Deidun said. “While I accept that a retirement village is a use that can be permitted … and that a retirement village may have a need for a larger footprint, the extent to which the proposed development will present broader building forms not characteristic of the surrounding neighbourhood … represents an inappropriate design ….” Mr Deidun said the appearance of the four flatroofed buildings was “very contrasting” to nearby buildings that sought to present “a scale and form that seek to reflect that of the existing heritage limestone cottages”. “The heritage place is characterised by limestone cottages of a modest scale, with a relatively high level of articulation, and with pitched roofs.”

Mr Deidun did not think the planned buildings and landscaping would “achieve the stated desired outcome” of the shire’s planning cheme. He was concerned by “the scale and breadth of the proposed buildings, and the nature in which they seek to defy the undulating topography of the land”. “A far more appropriate and characteristic response to this neighbourhood would see the disaggregation of the proposed buildings into far more modestly sized footprints, and a greater variation of heights provided to the separate buildings as they rise and fall with the undulating topography across the review site.” In his finding against the council permit, Mr Deidun said he had “not been persuaded that the benefits … can possibly outweigh the very large negative impacts, or disbenefits, that are associated with the uncharacteristic built form and landscaping response that is proposed for the review site, as well as the impacts on the character of the heritage place”.