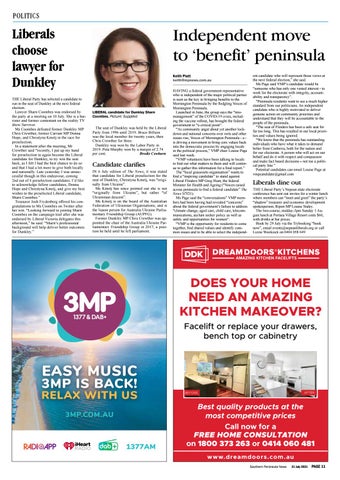 Liberals choose lawyer for Dunkley THE Liberal Party has selected a candidate to run in the seat of Dunkley at the next federal election. Lawyer Sharn Coombes was endorsed by the party at a meeting on 10 July. She is a barrister and former contestant on the reality TV show Survivor. Ms Coombes defeated former Dunkley MP Chris Crewther, former Carrum MP Donna Hope, and Chrestyna Kmetj in the race for preselection. In a statement after the meeting, Mr Crewther said “recently, I put up my hand for preselection to again become the Liberal candidate for Dunkley, to try win the seat back, as I felt I had the best chance to do so and that I had a lot more to give both locally and nationally. Late yesterday I was unsuccessful though in this endeavour, coming 2nd out of 4 preselection candidates. I’d like to acknowledge fellow candidates, Donna Hope and Chrestyna Kmetj, and give my best wishes to the preselected Liberal candidate, Sharn Coombes.” Treasurer Josh Frydenberg offered his congratulations to Ms Coombes on Twitter after her win. “Looking forward to joining Sharn Coombes on the campaign trail after she was endorsed by Liberal Victoria delegates this afternoon,” he said. “Sharn’s professional background will help deliver better outcomes for Dunkley.”

LIBERAL candidate for Dunkley Sharn Coombes. Picture: Supplied The seat of Dunkley was held by the Liberal Party from 1996 until 2019. Bruce Billson was the local member for twenty years, then Chris Crewther for three. Dunkley was won by the Labor Party in 2019. Peta Murphy won by a margin of 2.74 per cent. Brodie Cowburn

Candidate clarifies IN 6 July edition of The News, it was stated that candidate for Liberal preselection for the seat of Dunkley, Chrestyna Kmetj, was “originally from Ukraine”. Ms Kmetj has since pointed out she is not “originally from Ukraine”, but rather “of Ukraininan descent”. Ms Kmetj is on the board of the Australian Federation of Ukrainian Organisations, and is the liason person for Australia Ukraine Parliamentary Friendship Group (AUPFG). Former Dunkley MP Chris Crewther was appointed the chair of the Australia Ukraine Parliamentary Friendship Group in 2017, a position he held until he left parliament.

HAVING a federal government representative who is independent of the major political parties is seen as the key to bringing benefits to the Mornington Peninsula by the fledgling Voices of Mornington Peninsula. Launched in June, the group says the “mismanagement” of the COVID-19 crisis, including the vaccine rollout, has brought the federal government to “a critical point”. “As community angst about yet another lockdown and national concerns over rorts and other issues rise, Voices of Mornington Peninsula - a is driving a movement to bring core values back into the democratic process by engaging locals in the political process,” VMP chair Louise Page said last week. “VMP volunteers have been talking to locals to find out what matters to them and will continue to gather this information for a final report.” The “local grassroots organisation” wants to find a “inspiring candidate” to stand against Liberal Flinders MP Greg Hunt, the federal Minister for Health and Ageing (“Voices raised across peninsula to find a federal candidate” The News 5/7/21). Ms Page said the “conversations” VMP members had been having had revealed “concerns” about the federal government’s failure to address “climate change, aged care, child care, telecommunications, asylum seeker policy as well as safety and opportunities for women”. “VMP is the opportunity for residents to come together, find shared values and identify common issues and to be able to select the independ-

ent candidate who will represent those views at the next federal election,” she said. Ms Page said VMP’s candidate would be “someone who has only one vested interest - to work for the electorate with integrity, accountability and transparency”. “Peninsula residents want to see a much higher standard from our politicians. An independent candidate who is highly motivated to deliver genuine action on community priorities and understand that they will be accountable to the people of the peninsula. “The seat of Flinders has been a safe seat for far too long. This has resulted in our local priorities and values being ignored. “We know that the peninsula has outstanding individuals who have what it takes to demand better from Canberra, both for the nation and for our electorate. A person who will act on our behalf and do it with respect and compassion and make fact based decisions – not toe a political party line.” Potential candidates can email Louise Page at vmpcandidate@gmail.com

DOES YOUR HOME NEED AN AMAZING KITCHEN MAKEOVER? Facelift or replace your drawers, bench top or cabinetry