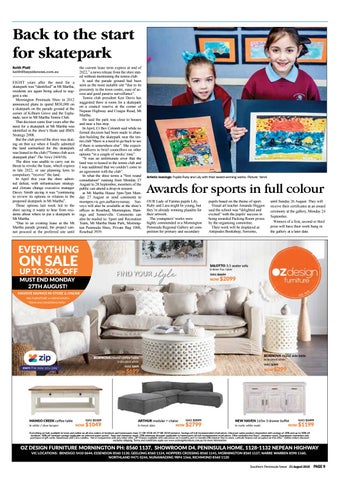 Back to the start for skatepark the current lease term expires at end of 2022,” a news release from the shire stated without mentioning the tennis club. It said the parade ground had been seen as the most suitable site “due to its proximity to the town centre, ease of access and good passive surveillance”. Tennis club president Ken Davis has suggested there is room for a skatepark on a council reserve at the corner of Nepean Highway and Craigie Road, Mt Martha. He said the park was close to houses and near a bus stop. In April, Cr Bev Colomb said while no formal decision had been made to abandon building the skatepark near the tennis club “there is a need to go back to see if there is somewhere else”. She expected officers to brief councillors on other options “in a couple of weeks’ time”. “It was an unfortunate error that the land was re-leased to the tennis club and I was saddened that we couldn’t come to an agreement with the club”. In what the shire terms a “first round consultation” running from Monday 27 August to 28 September, members of the public can attend a drop-in session at Mt Martha House 5pm-7pm Monday 27 August or send comments to mornpen.vic.gov.au/haveyoursay. Surveys will also be available at the shire’s offices in Rosebud, Mornington, Hastings and Somerville. Comments can also be mailed to: Sport and Recreation Team, Mt Martha Skate Park, Mornington Peninsula Shire, Private Bag 1000, Rosebud 3939.

Keith Platt keith@baysidenews.com.au EIGHT years after the need for a skatepark was “identified” at Mt Martha, residents are again being asked to suggest a site. Mornington Peninsula Shire in 2012 announced plans to spend $850,000 on a skatepark on the parade ground at the corner of Kilburn Grove and the Esplanade, next to Mt Martha Tennis Club. That decision came four years after the need for a skatepark at Mt Martha was identified in the shire’s Skate and BMX Strategy 2008. But the club proved the shire was skating on thin ice when it finally admitted the land earmarked for the skatepark was leased to the club (“Tennis club aces skatepark plan” The News 24/4/18). The shire was unable to carry out its threat to revoke the lease, which expires in late 2022, or use planning laws to compulsory “recover” the land. In April this year the shire admitted defeat, with infrastructure strategy and climate change executive manager Davey Smith saying it was “continuing to review its options in relation to the proposed skatepark in Mt Martha”. Those options last week led to the shire saying it wants to hear from residents about where to put a skatepark in Mt Martha. “Due to an existing lease at the Mt Martha parade ground, the project cannot proceed at the preferred site until

Awards for sports in full colour OUR Lady of Fatima pupils Lily, Ruby and Lara might be young, but they’re already winning plaudits for their artwork. The youngsters’ works were highly commended in a Mornington Peninsula Regional Gallery art competition for primary and secondary

pupils based on the theme of sport. Visual art teacher Amanda Heggen said the school was “delighted and excited” with the pupils’ success in being awarded Packing Room prizes by the organising committee. Their work will be displayed at Antipodes Bookshop, Sorrento,

until Sunday 26 August. They will receive their certificates at an award ceremony at the gallery, Monday 24 September. Winners of a first, second or third prize will have their work hung in the gallery at a later date.

BORNOVA round side table

Everything on Sale available in-store and online on all new orders of furniture and homewares from 21-08-2018 till 27-08-2018 inclusive. Savings off full recommended retail prices. Discount varies product dependent with savings of 20% and up to 50% off furniture. 50% off furniture savings applicable on selected super savers*, floor and clearance stock. 20% minimum discount applicable to homewares off full recommended retail prices. Offer excludes,Hot Buys*, clearance stock, Guardsman warranties and purchases of gift cards, Glasshouse and Circa candles. Not in conjunction with any other offer. ZIP Finance available with sale prices on 6 months and 12 months 0% interest free in-store. Latitude finance not accepted on this offer.* Online orders discount excludes shipping. Terms and conditions apply see www.ozdesignfurniture.com.au for more information