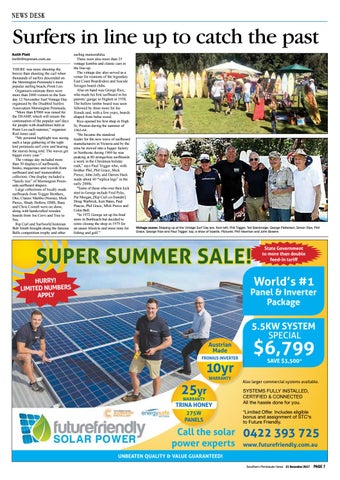 Surfers in line up to catch the past Keith Platt keith@mpnews.com.au THERE was more shooting the breeze than shooting the curl when thousands of surfers descended on the Mornington Peninsula’s most popular surfing beach, Point Leo. Organisers estimate there were more than 2000 visitors to the Sunday 12 November Surf Vintage Day organised by the Disabled Surfers Association Mornington Peninsula. “More than $7000 was raised for the DSAMP, which will ensure the continuation of the popular surf days for people with disabilities held at Point Leo each summer,” organiser Rod Jones said. “My personal highlight was seeing such a large gathering of the tight knit peninsula surf crew and hearing the stories being told. The waves get bigger every year.” The vintage day included more than 30 displays of surfboards, books, magazines and records from surfboard and surf memorabilia collectors. One display included a “family tree” of Mornington Peninsula surfboard shapers. Large collections of locally made surfboards from Trigger Brothers, Oke, Classic Malibu (Noosa), Mick Pierce, Shady Hollow, DMS, Bass and Chris Cornell were on show, along with handcrafted wooden boards from Joe Cervi and Tree to Sea. Rip Curl and Surfworld historian Bob Smith brought along the famous Bells competition trophy and other

surfing memorabilia. There were also more than 25 vintage kombis and classic cars in the line-up. The vintage day also served as a venue for reunions of the legendary East Coast Boardriders and Suicide Savages board clubs. Also on hand was George Rice, who made his first surfboard in his parents’ garage in Highett in 1958. The hollow timber board was soon followed by three more for his friends and, with a few years, boards shaped from balsa wood. Rice opened his first shop in High St, Preston during the summer of 1963-64. “He became the standout leader for the new wave of surfboard manufacturers in Victoria and by the time he moved into a bigger factory in Northcote during 1969 he was peaking at 80 stringerless surfboards a week in the Christmas holiday rush,” says Paul Trigger who, with brother Phil, Phil Grace, Mick Pierce, John Jolly and Darren Hack made about 40 “replica logs” in the early 2000s. “Some of those who owe their kick start to George include Fred Pyke, Pat Morgan, [Rip Curl co-founder] Doug Warbrick, Ken Bates, Paul Pascoe, Phil Grace, MIck Pierce and Colin Bell. “In 1972 George set up his final store in Bonbeach but decided to retire closing the shop in 1975 for an easier lifestyle and more time for fishing and golf.”

SYSTEMS FULLY INSTALLED, CERTIFIED & CONNECTED All the hassle done for you.