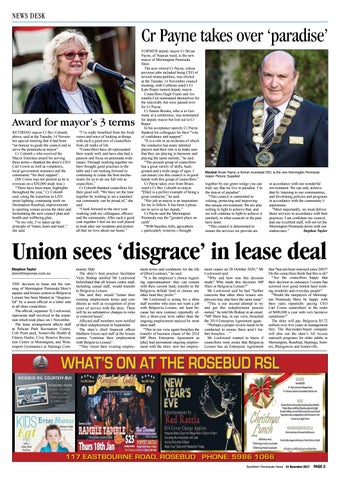 Award for mayor’s 3 terms RETIRING mayor Cr Bev Colomb, above, said at the Tuesday 14 November special meeting that it had been “an honour to guide the council and to serve the peninsula as mayor”. Cr Colomb – who received the Mayor Emeritus award for serving three terms – thanked the shire’s CEO Carl Cowie as well as volunteers, local government ministers and the community “for their support”. (Mr Cowie was not present as he is overseas on a $30,000 study tour.) “There have been many highlights throughout the year,” Cr Colomb said, citing the transition to LED street lighting, continuing work on Destination Rosebud, improvements to sporting venues across the shire and formulating the new council plan and health and wellbeing plan. “In my role, I’ve taken up the principle of ‘listen, learn and lead’,” she said.

“I’ve really benefited from the fresh views and ways of looking at things with such a good mix of councillors from all walks of life. “Councillors have all represented their wards well, and have also had a passion and focus on peninsula-wide issues. Through working together we have brought good practises to the table and I am looking forward to continuing to create the best mechanisms for us to do our full role as councillors.” Cr Colomb thanked councillors for their good will. “We have set the tone together by wishing to set a standard our community can be proud of,” she said. “I look forward to the next year working with my colleagues, officers and the community. After such a good year together I feel we are well placed to look after our residents and protect all that we love about our home.”

FORMER deputy mayor Cr Bryan Payne, of Nepean ward, is the new mayor of Mornington Peninsula Shire. The now retired Cr Payne, whose previous jobs included being CEO of several municipalities, was elected at the Tuesday 14 November council meeting, with Cerberus ward’s Cr Kate Roper named deputy mayor. Councillors Hugh Fraser and Antonella Celi nominated themselves for the mayoralty but were passed over for Cr Payne. Cr Simon Brooks, who is in Germany at a conference, was nominated for deputy mayor but lost out to Cr Roper. In his acceptance speech, Cr Payne thanked his colleagues for their “vote of confidence and support”. “It is a role in an orchestra of which the conductor has many talented players and their role is to make sure that they are playing in harmony and playing the same melody,” he said. “The present group of councillors has a great variety of skills, background and a wide range of ages. I can assure you this council is in good hands with this group of councillors.” Cr Payne takes over from Briars ward’s Cr Bev Colomb as mayor. “[She] is a perfect example of being a great conductor,” he said. “Her job as mayor is an inspiration for me to follow. It has been a pleasure to serve as her deputy.” Cr Payne said the Mornington Peninsula was the “greatest place on earth”. “With beaches, hills, agriculture – particularly wineries – brought

together by our green wedge you can truly say that we live in paradise: I’m the mayor of paradise”. “This council is committed to valuing, protecting and improving this unique environment. We are also willing to fight to achieve that, and we will continue to fight to achieve it similarly to what councils in the past have done. “This council is determined to ensure the services we provide are

in accordance with our wonderful environment. We can only achieve that by listening to our communities, and developing policies and programs in accordance with the community’s aspirations. “Most importantly, we must deliver those services in accordance with best practices. I am confident our council, and our excellent staff, will not let the Mornington Peninsula down with our endeavours.” Stephen Taylor

Union sees ‘disgrace’ in lease deal Stephen Taylor steve@mpnews.com.au THE decision to lease out the running of Mornington Peninsula Shire’s aquatic and leisure centres to Belgravia Leisure has been blasted as “disgraceful” by a union official in a letter sent to all shire councillors. The official, organiser Ty Lockwood, represents staff involved in the transition which took place on 1 November. The lease arrangement affects staff at Pelican Park Recreation Centre, Crib Point pool, Somerville Health & Fitness Studio, Civic Reserve Recreation Centre in Mornington, and Westernport Gymnastics at Hastings Com-

munity Hub. The shire’s best practice facilitator Vicki Bishop notified Mr Lockwood beforehand that all leisure centre staff, including casual staff, would transfer to Belgravia Leisure. She said they would “retain their existing employment terms and conditions as well as recognition of prior years of service with the shire. There will be no substantive changes to roles or rostered hours”. Affected staff members were notified of their redeployment in September. The shire’s chief financial officer Matthew Green said staff at the leisure centres “continue their employment with Belgravia Leisure”. “They retain their existing employ-

ment terms and conditions for the life of [their] contract,” he said. “It is the employee’s choice regarding superannuation: they can remain with their current fund, transfer to the Belgravia default fund or choose any other fund they prefer.” Mr Lockwood is acting for a shire staff member who does not want a job with Belgravia Leisure, not least because her new contract reportedly offers a three-year term rather than the ongoing employment enjoyed by most shire staff. “This in our view again breaches the transfer of business clause of the 2014 MP Shire Enterprise Agreement as [she] had permanent ongoing employment with the shire: now her employ-

ment ceases on 28 October 2020,” Mr Lockwood said. “Why and how was this decision made? Who made this decision: MP Shire or Belgravia Leisure?” Mr Lockwood said he had “further concerns that other shire leisure employees may also have the same issue”. “This is our second attempt to try and get this redeployment process sorted,” he told Ms Bishop in an email. “MP Shire has, in our view, breached the 2014 Enterprise Agreement again. “Perhaps a proper review needs to be conducted to ensure there aren’t further breaches …” Mr Lockwood wanted to know if councillors were aware that Belgravia Leisure has an Enterprise Agreement

that “has not been renewed since 2003? Do the councillors think that this is ok? “Are the councillors happy that their decision to outsource Leisure has screwed over good, honest hard working residents and everyday people? “Would the ratepayers of Mornington Peninsula Shire be happy with their rates reportedly paying CEO Carl Cowie somewhere in the order of $400,000 a year with very lucrative conditions?” The shire will pay Belgravia $5.72 million over five years in management fees. The Bayswater-based company will also run the shire’s All Access outreach programs for older adults in Mornington, Rosebud, Hastings, Somers, Blairgowrie and Somerville.